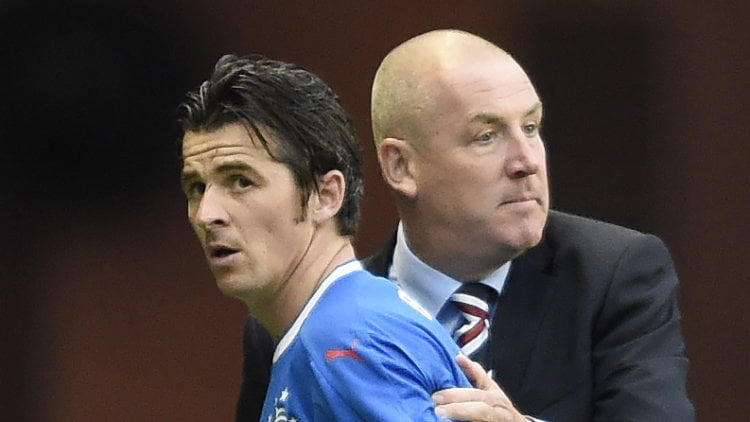 Posted at 15:25h in Uncategorized by PLZ Team 0 Comments
0 Likes

Rangers boss Mark Warburton does not believe Joey Barton’s ill-fated signing will hamper his bid to lure other top players to Ibrox.

But despite the angry fall-out, the former England midfielder insists he would still make the move north given the choice again.

Warburton was pleased to hear Barton speaking so positively about his former club and believes other big names can still be tempted to make the same switch he did.

He said: “It’s a big club. It’s not about Joey or myself. Rangers is a magnificent club, a fantastic football institution.

“You had to be at Ibrox on Saturday to see that atmosphere and feel it around that magnificent football stadium.

“There is no doubt there is huge selling points to Rangers, so we’re always delighted to hear that.

“We’re not going to outbid big clubs down south for players in terms of the financial aspect, but we can demonstrate what Rangers has to offer in terms of the training complex, an iconic stadium and a magnificent support with 50,000 fans, so there’s a lot to enjoy about Rangers.

“Are we still capable of signing someone of Joey’s calibre? Absolutely, no doubt.”

Speaking on Wednesday night, Barton told BBC Radio 5 Live: “It was an opportunity I couldn’t let pass. You want to make the best decision possible and weigh up the reasons you’re going to do things. It’s a great football club. I’d do it again. It’s a phenomenal place, it’s completely unique.

“The only regret I’ve got is not playing football now. No player wants to miss football when they’re fit, especially not when you’re 34 and you don’t have another 10 years to play and you’re watching Match of the Day and reading the papers and everyone else is playing football and you are like: ‘I would really like to be doing that right now’.

“My last game for Rangers was a defeat in the Old Firm at Celtic Park. Nobody wants to do that, nobody wants to play eight games for a club, you want to have more of an impact, certainly for the amount of backing the fans gave me and the belief they put in me and for the football club to get me there in the first place. So, incredibly disappointed.

“Life is too short to look back and hold on to things and think, ‘If I could have played that way, or done it that way, this would have happened’.”