By Peter MartinAugust 15, 2016No Comments 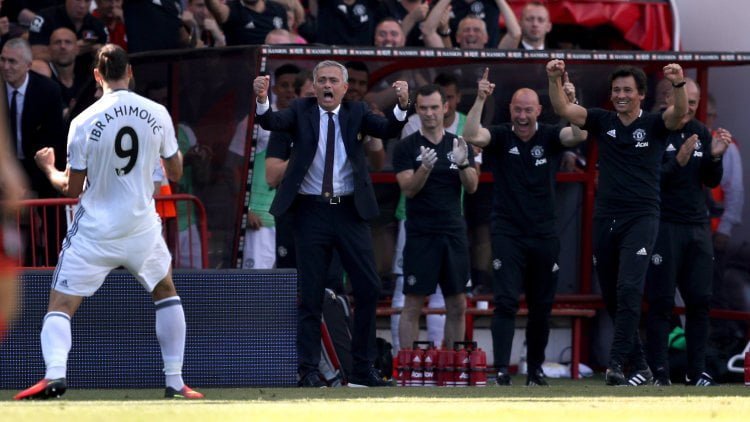 Zlatan Ibrahimovic marked his Premier League debut with a goal as Jose Mourinho’s Manchester United tenure began with a convincing 3-1 victory over Bournemouth.

The match was Mourinho’s first Premier League game in charge of United but nevertheless Ibrahimovic arrived as the star attraction on the south coast and the Swede did not disappoint, unleashing a superb long-range strike in the second half. He has now scored on debut in Serie A, LaLiga, Ligue 1 and the Champions League.

Juan Mata and Wayne Rooney’s goals had earlier put United in command before Bournemouth defender Adam Smith added what proved only to be a consolation.

Mourinho has spent almost £150millon turning United into title contenders this summer but with £89million man Paul Pogba suspended and Henrikh Mkhitaryan starting on the bench, it was left to Ibrahimovic to provide the blockbuster appeal.

The 34-year-old has previously plied his trade for Ajax, Juventus, Inter Milan, Barcelona, AC Milan and Paris St Germain, but the Vitality Stadium, with its raucous 11,464 fans, seemed primed to offer an altogether different type of challenge.

Sloppy touches early on and a clattering from defender Simon Francis offered the hosts room for encouragement, but it is goals that Ibrahimovic’s success this season will be measured by and his was certainly the pick of the bunch.

Mata will also hope to be judged on merit rather than reputation, after all his United career only began when Mourinho decided he was not suited to his style of play at Chelsea while in the Community Shield last weekend, the Spaniard endured the humiliation of coming on and off again as a substitute.

Whether his goal here signals the start of some sort of rapprochement between the pair remains to be seen but Mourinho must have noticed that Mata was arguably United’s brightest performer before going off for Mkhitaryan with 15 minutes to play.

Bournemouth’s best spell came early on as Luke Shaw turned into trouble when his loose touch almost allowed Callum Wilson a shot at goal but otherwise both sides struggled for rhythm in the opening stages.

With half an hour on the clock, United gradually established a foothold although their opening goal was largely due to a combination of good fortune and defensive error rather than any fluent attacking move.

Francis’ under-hit back-pass set Artur Boruc scrambling and as the goalkeeper attempted to clear, the ball instead rebounded into the path of Mata, who was left to tap into an empty net.

Any hopes of a comeback then looked to be dashed midway through the second period as United scored twice in five minutes, Rooney nodding in Anthony Martial’s miscued shot before Ibrahimovic’s stinging effort from 25 yards evaded Boruc’s outstretched hand and nestled in the bottom corner.

As Ibrahimovic turned to celebrate with Mourinho, Bournemouth appeared in danger of a demolition but instead they quickly grabbed a goal back as substitute Lewis Grabban played in Smith and the full-back showed great composure to turn and drill the ball into the top corner.

It staved off United’s goal glut but there was to be no late drama.

The jubilant visiting fans were left disappointed as they begged Mourinho for a late celebratory wave. The Portuguese knows there is still much work to be done.