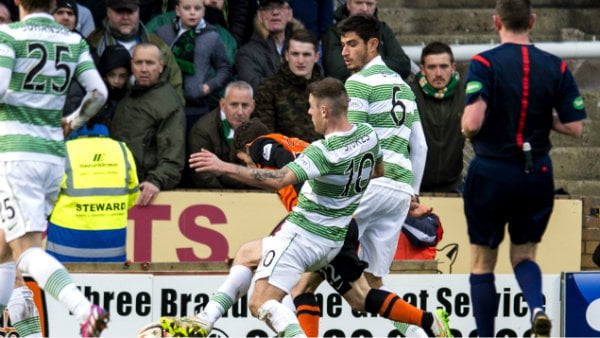 Substitute John Guidetti’s last-minute equaliser has given Celtic a fighting chance heading into the second leg of their Europa League last-32 clash at the Giuseppe Meazza after a pulsating six-goal thriller against Inter.

The visitors made a blistering start to go up two up inside the opening 14 minutes through Xherdan Shaqiri and Rodrigo Palacio to stun a packed out crowd at Parkhead.

The Hoops stormed back into the contest with two goals inside 60 seconds courtesy of Stuart Armstrong and a Hugo Campagnaro own goal.

A mistake by Craig Gordon allowed Palacio to nip in and add a third just before half-time but Guidetti’s wonderful last-minute effort has handed the Hoops a lifeline.

The fixture is steeped in nostalgia after Celtic’s European Cup success over the Italians in 1967 and this game will also have its place in history after an enthralling encounter.

With Kris Commons ruled out before the game the Hoops were unchanged from the side that beat St Johnstone at the weekend, while Inter boss Roberto Mancini made three changes with goalkeeper Juan Carrizo being preferred to Samir Handanovic.

It was a typically attacking and adventurous approach from Ronny Deila in what was arguably his biggest test of his managerial career to date.

And it was also a huge night for Gary Mackay-Steven and Armstrong both of whom made their European debuts for the Hoops.

But it was another debutant who made the perfect start, unfortunately, from a Celtic perspective it was a player in Nerazzurri colours.

Shaqiri – signed from Bayern Munich in January – found space in behind the defence, latched on to Zdravko Kuzmanovic’s through ball; the Swiss attacker’s first shot was blocked but he was sharp enough to fire in the rebound from a tight angle after Craig Gordon was unable to collect.

Celtic looked disorganised and unable to deal with the movement and intelligence of the Inter midfield.

Fredy Guarin and Shaqiri were dictating the play and it wasn’t long before they made that count as the Italians doubled their lead.

Shaqiri collected possession on the edge of the Celtic box he dinked a deft ball into the area, Emilio Izaguirre lashed it clear only to see it cannon off Virgil van Dijk and into the path of Palacio, who slotted under Gordon.

Sixty thousand fans at Parkhead had been silenced, perhaps contemplating a heavy defeat but they were soon in raptures after an incredible 60 seconds of action saw the hosts restore parity.

Armstrong halved the deficit, firing home from Matthews cut back before seconds later the midfielder’s pressure forced Campagnaro to put through his own net from Johansen’s delivery.

The momentum was with the hosts as Griffiths blazed over from a free kick but it was Mancini’s side that went into the break with the advantage.

Gary Medel’s hopeful long ball looked comfortable for Gordon, but Palacio capitalised on a mistake from the goalkeeper, who let the ball squirm away from him to allow the Argentina international to stroke the ball home into an empty net.

Inter could have extended their advantage in the second half after good work by Mauro Icardi found Palacio but his tame effort failed to trouble Gordon, with Shaqiri lurking, before the Swiss himself forced a good save out of Gordon.

The pendulum continued to swing from end to end as Guarin’s free kick smothered by Gordon suddenly turned into a great counter and chance for Mackay-Steven at the other end who tried to clip the ball beyond Carrizo though the Argentine blocked well.

Inter looked to preserve their fragile lead as Icardi made way for Mateo Kovacic, before Celtic threw on Liam Henderson and Guidetti for Armstrong and Griffiths in a desperate attempt to salvage a draw.

The teenager Henderson almost found an equaliser but his volley was straight at Carrizo just as though it looked as if Celtic would go into the second leg trailing, Guidetti, against his former boss, popped up with a sublime finish to level the scores.