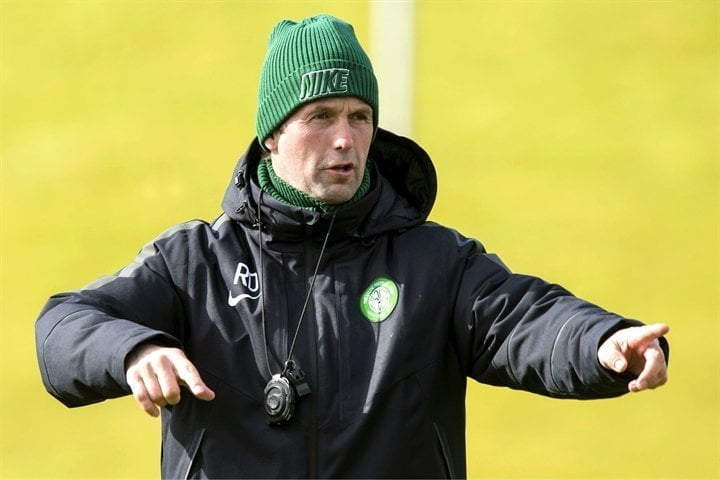 Celtic boss Ronny Deila has confirmed his interest in Hearts captain Danny Wilson and has not given up hope of convincing defender Jason Denayer to stay another season.

The Hoops have been linked with Wilson, who has impressed at the Championship-winning side and could be available for around £400,000.

Deila is looking to strengthen his defensive options at the back and admitted his interest in the former Liverpool and Rangers centre-back.

“He’s one of many names we’re talking about but there is nothing serious in that way. He is a good player.”

The Norwegian boss has revealed that they will be without Jason Denayer for the Champions League qualifiers as the Belgium international will return to Manchester City for pre-season.

However, he hasn’t given up hope of luring Denayer back to Celtic for next season.

“Jason is going back to Manchester City to have a pre-season and we’ll see if we can get him back after. That’s something we want of course but we have to cooperate with city.

“I think it’s good for him to stay here as hopefully we’ll qualify for the Champions League and that will give him more experience.

“Jason is a good example of players coming here and getting the right development and hopefully that will attract others.

“He’s ambitious and wants to play at the highest level. He can do that but it is important he is playing games. At Man City it is very hard to get game time and I think Celtic is good for him.”

Meanwhile, Deila says Liam Henderson still remains in his plans after being loaned out to Rosenborg. The 18-year-old has joined the Norwegian outfit until July and the Celtic boss believes it will be great for his development.

“Liam is a very talented player and he needs games. I think this is a good move for him. We have a lot of options in the midfield and he can play now until July 1.

“He can get as much experience as possible. It’s a big club in Norway, they have high expectations and it will give him more experience as a person and a player.

“He was quite keen about the move that’s what is good with Liam he’s so ambitious, he wants to develop all the time.

“I don’t want to get rid of him. I’m doing this because I think this is good for his development if I was selfish I would keep him here because we might need him.”