Celtic on verge of something special, says Johansen 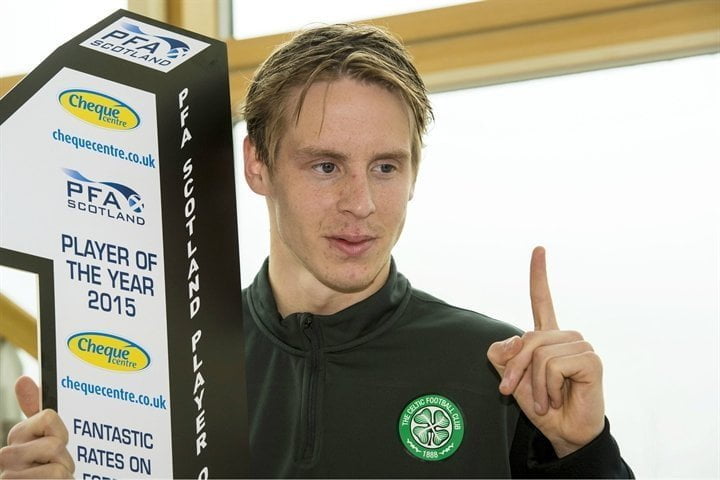 Celtic star Stefan Johansen believes the club are on the cusp of something special after they narrowly lost out on a treble this season.

The Norway international, who was voted Scotland’s Player of the Year at the PFA awards on Sunday, says the disappointment makes him all the more determined to ensure they complete the domestic clean sweep next term.

Celtic added to their League Cup triumph with their fourth successive Scottish Premiership title last weekend, but the Scottish Cup semi-final defeat to Inverness CT means they won’t be in the final later this month.

Nevertheless, Johansen sees plenty of reason to be optimistic about Celtic’s chances of a treble and Champions League qualification in the next campaign.

“Could it be a special era? Yeah it feels like that now. When you get so close to a treble it makes you more motivated for next year.

“When I came to Celtic I knew it was a huge club. It’s a big, big name even back in Norway.

“I enjoy playing here – it’s hard not to when you are winning titles. I’m happy now and I think I can develop more.

“I won player of the year two years running in Norway.

“It is a bit more special here. I’m not being negative about Stromsgodset or Norway, but for me Celtic is a huge club and so to win that award here is a big, big thing for me.

“I’ve gotten so many text messages from back home and that makes you realise how big it is, even back home. I’m very proud of it.

“I come from a city where there are less than 2,000 people living there. It’s important for me that even if you live in a small city like this you can do well in football.

“I hope it’s a good inspiration for the kids over there. My brother Simon is also young, I hope he can use this as an inspiration.”

Celtic failed to make the group stages of this year’s Champions League after being beaten by Legia Warsaw (who were then eliminated for fielding an ineligible player) and Maribor.

But Johansen believes their experience in the Europa League – where they made the Last-32 before being put out by Inter – will stand them in good stead.

“I experienced this year the disappointment in the team and disappointment with the Celtic fans as well. It’s so important to us but it’s also difficult because we are not in it this season so we just need to learn from this year and use the holiday now to come back fit.

“We’ve got important games coming up after the break we need to think about that and be ready for the games.

Johansen also reserved special praise for the supporters, whom he feels can be the difference between a player signing or not at Celtic this summer.

“The fans here are very special to play in front of. I’ve never experienced anything like it before.

“We played away from home in the Europa League but anywhere we went, I never saw fans like ours.

“It’s an honour to have them cheering our team. They help a lot. When you feel tired in the game they cheer and bring your energy back.

“They can be the difference between whether a player signs here or not. The fans are a huge part of this club.

“We have many big players who want to win trophies. But what you know about Celtic when you come here is the atmosphere you get at games. Those nights at Celtic Park are unbelievable.

“I don’t think it’s for nothing that many big players they have enjoyed playing at Celtic Park.”