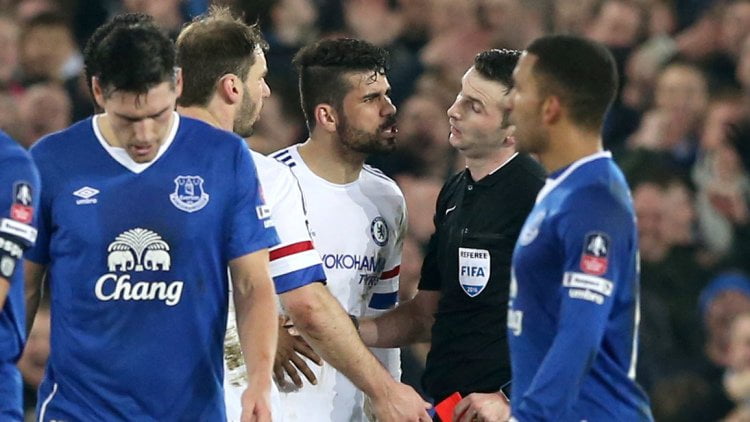 Chelsea striker Diego Costa has been given an additional one-match ban, fined £20,000 and warned over his future conduct after admitting a charge of improper conduct following his dismissal at Everton last month, the Football Association has announced.

Costa was sent off for the first time in his Chelsea career in the FA Cup quarter-final loss at Goodison Park and given an automatic two-match ban, ruling him out of the draw with West Ham and Saturday’s Premier League clash with Aston Villa.

Now Costa, who had no case to answer over suggestions he bit Everton midfielder Gareth Barry or made an inappropriate gesture to Everton fans, will also miss the April 9 match at Swansea.

An FA statement read: “Following an independent regulatory commission hearing on Thursday (March 31, 2016), Chelsea’s Diego Costa has been given a one-match suspension, fined £20,000 and warned as to his future conduct.

“The forward admitted a charge of improper conduct in relation to his behaviour after he was shown a second yellow card in the FA Cup sixth-round tie on March 12, 2016 at Goodison Park.

“This suspension will follow immediately on the conclusion of the player’s current ban.”

Costa’s automatic ban was two games as it was considered to be his second dismissal of the season after he was handed a retrospective three-match ban for altercations with Arsenal’s Laurent Koscielny and Gabriel in September.

Costa has scored 11 goals in his last 16 games for Chelsea under Guus Hiddink. The interim boss admitted on Friday he would use the final eight games of the Premier League season to “experiment”.

“We now have eight games coming up, and there’s not much to win for Chelsea anymore. There might be some time for experiments,” Hiddink said.

The Dutchman refused to be drawn on the prospect of John Terry making an unlikely England return in time for this summer’s European Championship.

The 35-year-old Chelsea captain recently spoke to England boss Roy Hodgson, who on Tuesday night admitted to a lack of defensive options following the friendly loss to Holland and ahead of Euro 2016.

Terry won 78 caps before retiring from England duty in September 2012, accusing the Football Association of making his position within the international set-up “untenable” following its pursuit of a racism charge against him.

“Whether they had a conversation, yes or no… but there was no issue for either of them.

“We didn’t talk about that (an England return). What I know (is) he likes to play football.

“John is doing his job for Chelsea and decided already one or two or three years ago not to be available anymore for England.”