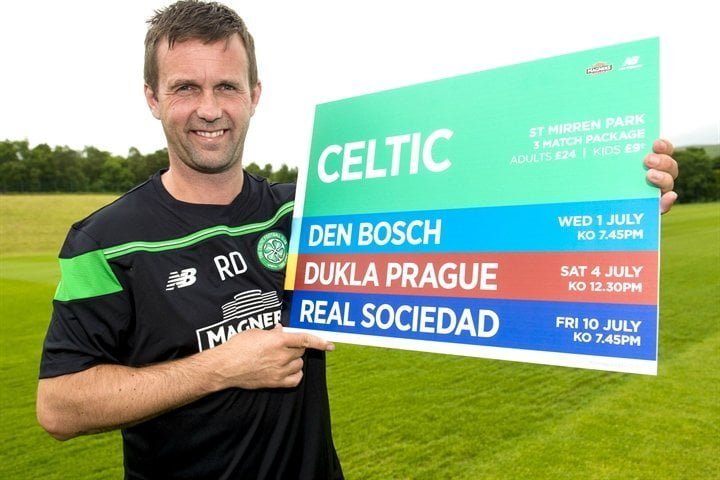 Celtic boss Ronny Deila stressed he’ll keep his eyes open for possible transfer targets but believes his side is good enough to qualify for the Champions League already.

The Hoops have been handed what the Norwegian boss described as a “good draw” after they were paired with Icelandic outfit Stjarnan in the second round qualifier of Europe’s premier competition.

Up until now the Scottish champions have been quiet in the transfer market with just the one addition in Dedryck Boyata who replaced outgoing central defender Jason Denayer.

And despite being linked with a number of players including Genk striker Jelle Vossen, St Pauli defender Marcel Halstenberg and Hibernian midfielder Scott Allan, Deila insisted the pool of players he has at his disposal already is good enough to get them into the group stages.

“I’m confident that these players can get us into the Champions League,” he said. “You seen the level they were at last season and they are at a different level now.

“I’m happy with the players I have and we’ll see if we bring any one else into the team but it has to be someone who can make a difference.”

Last week, Celtic assistant boss John Collins shot down suggestions that they were targeting Scotland internationals Ikechi Anya and Steven Fletcher, admitting they were out of their wage bracket.

But Deila stressed they will monitor the market for any potential talent.

“You never know what you can afford or not but if we don’t have the money then we can’t do it that is of course right,” he said.

“But you have to keep your eyes open and follow what’s happening and that’s we’re going to do in the next month.

“But the most important focus is the players. We have to prepare for the Champions League.”

The Norwegian boss was asked about Genk striker Vossen but said he was just “one of a hundred names” Celtic were linked with and insisted it was more important to keep players.

Defender Virgil van Dijk is one such player and speculation continues to mount about his future after the Dutchman told a Dutch magazine he wanted the club to sell him.

However, Deila stressed that Van Dijk’s focus is on Celtic and his head won’t be turned like last season.

“I speak with Virgil all the time he is very motivated to stay at Celtic,” Deila continued. “He enjoys being here every day, he’s a very important player for us and his task is to help us get into the Champions League.

“I know he will be motivated for that. I’ve been clear to him and everybody else that he will stay here for the qualifiers.

“There’s no contact that I’ve been aware of. It’s a lot of talking and we have to make sure the focus is on the pitch.

“I’m clear that won’t happen again. He’s one year older, hopefully a year brighter and more experienced. He knows that what we do on the pitch is the most important thing.”