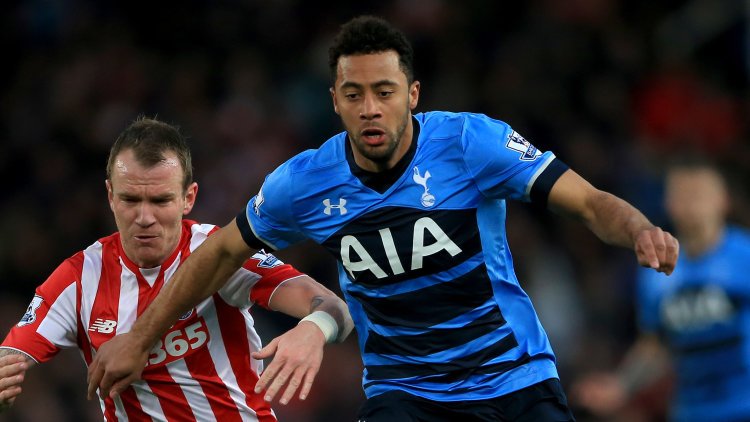 Mousa Dembele has told Leicester to expect a fight until the end as Tottenham look to capitalise on any further slip-ups in the Premier League title race.

Claudio Ranieri’s men dropped points for the first time since March 1 on Sunday and Spurs capitalised in style at the Britannia Stadium.

Mauricio Pochettino’s men ran amok in what was supposed to be a difficult fixture at Stoke, where the margin could easily have been greater than the 4-0 scoreline secured through Harry Kane and Dele Alli doubles.

It was a wonderful display that cut Leicester’s lead to five points and, while there are only four rounds of matches to go, Dembele has promised to keep the pressure up.

“This is the situation where you can see if we are ready or not,” the Belgium international said. “The pressure is there.

“Everyone knows it will be very difficult, but we play like this so you can see the mentality is there. Everyone wants it and we just manage to keep playing our game.

“In the past it was very difficult as well. Everyone saw the way we played: confident, direct, creative, positive.

“One of the best performances – that says something. We just want it and we’re not scared of it.”

Dembele is “very proud” of the way Tottenham triumphed in the Potteries and hopes to take the title race to the final day of the campaign.

Spurs’ hopes look faint given the number of matches remaining, but striker Jamie Vardy’s absence could prove a significant blow for Leicester.

The 29-year-old will miss Sunday’s clash with Swansea after being sent off against West Ham, with his reaction potentially bringing an increased ban after being charged with improper conduct by the Football Association.

“It’s one of their best players so it’s good for us of course but we concentrate on our own game,” Dembele said of Vardy.

“It’s good everyone is there, nobody is injured. Everyone is mentally ready so that’s the most important thing.”

England midfielder Alli echoed the remarks about mental strength after netting delicious goals either side of an embarrassing miss at the Britannia Stadium.

“We showed what we are all about,” Alli said. “We won’t stop fighting until the end of the season.

“Stoke is never an easy place to come and it was a strong performance. We created a lot of chances and could have scored a lot more. It’s a good statement.

“We’ve been pretty strong all season. Maybe a few games not at our best but we’ve got a great team here and we do look like we’re getting stronger.

“We’re a good team and we’ll keep working hard on the training ground.”

Spurs’ inspired display led to a chastening defeat for Stoke, who now face the unenviable task of bouncing back at Manchester City this weekend.

“Don’t underestimate the quality of Spurs, but I have to admit that we were poor,” manager Mark Hughes said.

“We didn’t do the things that we spoke about prior to the game which is disappointing.

“Conceding the goal early on was frustrating again, because it was identical to what happened at Anfield last weekend.

“We need to be more resolute in our defensive work. We know that we have to improve at the Etihad Stadium on Saturday.”