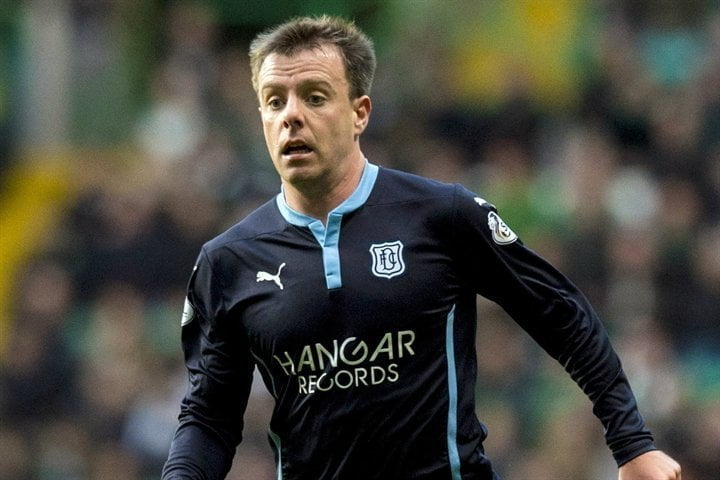 A Scottish Premiership footballer has avoided jail after admitting to assaulting a police officer.

Dundee attacker Paul McGowan kicked PC Jamie White and has been given a 16-week electronic tagging order, meaning he must be at home every day between the hours of 7pm and 7am for the next four months.

The incident is said to have occurred less than 24 hours after Dundee’s 2-1 defeat to Celtic in November last year.

It means he won’t be available for Dundee’s Wednesday evening clash against Celtic on April 22.

It’s the third time McGowan has been convicted of police assault.

His lawyer Liam O’Donnell said McGowan had a gambling problem which is the root cause of his anger.

He added: “This is a sad state of affairs that he finds himself in this situation.

“It is totally unacceptable behaviour. In his statement the officer says he took hold of the accused and he was kicked in the right leg but there was no injury as a result.

“Mr McGowan is a professional footballer and he should know better.

“He has been in trouble before and he has now completed the community payback order which was the subject of the last conviction.

“He was not in trouble aged between 16 and 23. At the age of 23 though, he separated from his partner because of an underlying gambling problem.

“This seems to be the root cause of his offending. When he takes alcohol he becomes aggressive because of the gambling problem.

“He realises he is on the cusp of custody but I would ask for a sort deferral to ensure he is of good behaviour rather than a short term prison sentence.”

“Here you are again. The report before me is a mixed one with things that are favourable and things not so.

“You have a hostile bias towards police when you have a drink in you. Custody is at the forefront of the courts mind. I am sufficiently persuaded there is a direct alternative to custody.”

Dundee have said they will stand by the player, a statement said: “The club does not condone the behaviour which has led to this and wouldn’t from any member of our staff. We fully respect the decision made by the court and Dundee FC will be standing by the player.

“Paul is an integral part of the club and we will be working alongside the PFA with him as he bids to positively resolve his off the field issues.

“With the support of the manager, his team-mates and club staff, we hope Paul will be able to move forward and be part of another successful season next year at Dens Park.

“The club will be making no further comment on the matter.”