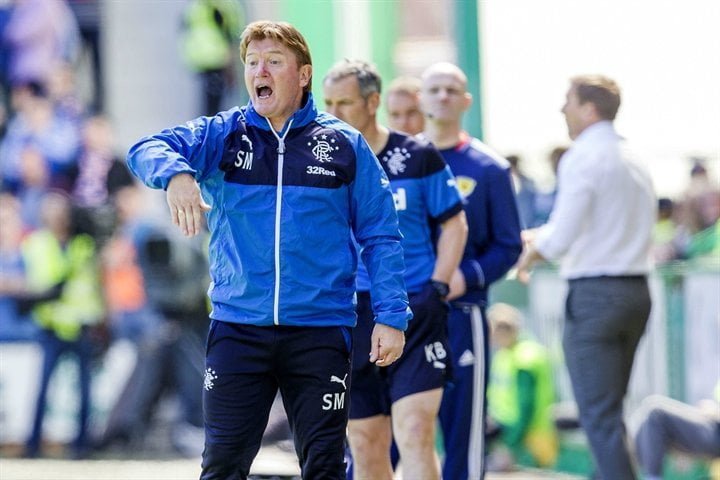 Rangers boss Stuart McCall believes stadiums with empty seats run the risk of harming the image of Scottish football as the play-off final ticket feud with Motherwell rumbles on.

The Championship side, who were due to receive the whole of the away stand in the second leg at Fir Park, have had their ticket allocation reduced to 1500 after only giving Motherwell 950 briefs for the sold-out, first-leg clash at Ibrox.

With the final being broadcast across the country a large audience is expected to tune in and McCall believes a swathe of empty seats behind a goal doesn’t reflect too well on the domestic game.

“I don’t know the ins and outs and what the reasons are behind it. I feel for the Rangers supporters who won’t be able to get to the game.

“Likewise Motherwell will have a 1,000 supporters there at Ibrox and they will try to make themselves heard. That’s the decision that has been made but it’s not great.

“I don’t know if it could have been sorted out in any other way I think originally one of the staff said to me we should be okay for tickets because we were going to get the full stand and now we’re not.

“I’ve seen [Motherwell general manager] Alan Burrows quoted in the papers that he would like the rules looked at [to do with percentages of briefs giving to away fans] so that this doesn’t happen again.

“This is going to be the last game in British football on Sunday and it will be on show with a big audience watching.

“It will look poor when the camera pans in behind one goal and there are empty seats.

“Clubs should be encouraging away supporters to their football ground. We’ve got to look at Scottish football as a whole when the game needs supporters – they are the lifeblood of the game. It’s a bit disappointing.”