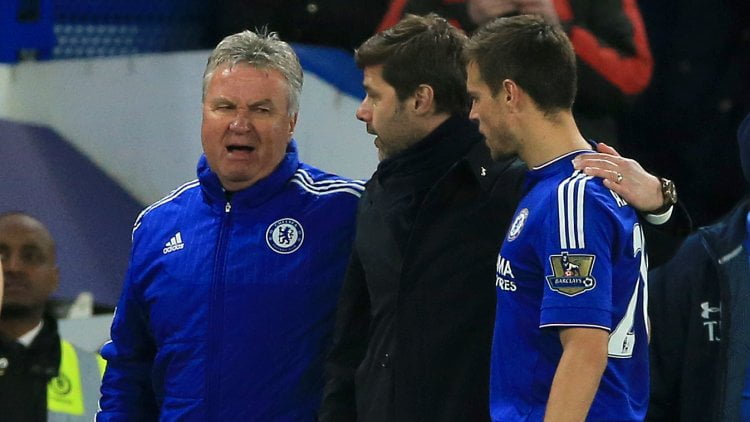 Ranieri, who was sacked by Chelsea owner Roman Abramovich in 2004, guided the Foxes to a remarkable title success, sealed when Tottenham conceded a two-goal lead to draw 2-2 in a bad-tempered clash at Stamford Bridge.

Chelsea interim boss Hiddink said: “I got a call from Ranieri. He called and thanked us for what we did, especially the second half, and I congratulated him for being champions.

“(He said) five times ‘thanks’, because of the emotion. I didn’t see any tears because it was not a Facetime conversation, but his voice was trembling a bit.”

He said: “They didn’t implode. There was no tension when they started smelling the title. That’s why I think they deserve it highly.”

Tottenham’s indiscipline at Stamford Bridge was costly as they lost a two-nil lead and, ultimately, the title.

Spurs needed to end their 26-year wait for victory at Stamford Bridge to have any hope of overhauling the Foxes and were 2-0 ahead at half-time through goals from Harry Kane – his 25th in the league this season – and Son Heung-Min.

Gary Cahill pulled a goal back before substitute Eden Hazard belatedly rediscovered his blistering form of last season with the goal which denied Spurs and saw Leicester crowned champions.

Tottenham’s failure to see out victory can be attributed, at least in part, to their indiscipline in a niggly encounter which will see numerous incidents scrutinised by the Football Association. Nine Spurs players were booked, four after Hazard’s equaliser, and the players left the field squabbling.

Spurs boss Mauricio Pochettino, who congratulated Leicester and Ranieri, said: “Nothing to say. It’s normal, the emotion, fighting on the pitch maybe is not a good example for both teams, but it was hard.”

Asked about the lack of discipline, Pochettino, who did not see the incident when Mousa Dembele appeared to poke Chelsea striker Diego Costa in the eye, added: “This is a feeling that for me is a good lesson that we need to take, to improve. Fantastic night for us.

“We showed we’re strong in our mentality, we fight all together.

“You can see in every game in the last few days a lot of things happen, because we are at the end of the season and a lot of emotion.”

Hiddink added: “I had to come inbetween a lot of people today.

“There was at the end highly emotion and there was a bit of verbal animosity and I tried to come in between and protect a bit.

“Then everyone started dancing around and pushing around. We shuffled a bit on the benches.

“Those incidents we must not have, but it happens and at the end let’s calm down.”

Hiddink played down the confrontations.

“We are not the most beautiful boys, let’s be honest,” the Dutchman added.

Many were left to wonder where the Chelsea on show had been this season.

“In my spell, I cannot complain about the attitude of the team,” he said.

His goal on May 3, 2015 against Crystal Palace earned Chelsea the title and, one day short of that anniversary, his strike saw Leicester crowned winners.

Hiddink said: “Eden has had a difficult season. It’s good to see him come back. He did very well. You saw there what he is capable of.”

Spurs’ most recent win at Stamford Bridge was in February 1990, when Gary Lineker scored the winner.

And now Leicester fan Lineker will have to fulfil his pledge of hosting Match of the Day in his underwear as the Foxes are champions.

He said: “I want to congratulate Leicester Football Club, Claudio Ranieri, all the players. I think it’s a fantastic season for them.

“It’s not the right moment to analyse the game. Our players are feeling very disappointed and sad now but this is a good feeling. It’s a feeling we need to feel and for the future.

“We’re the youngest squad in the Premier League and we’re in a position that is fantastic.”