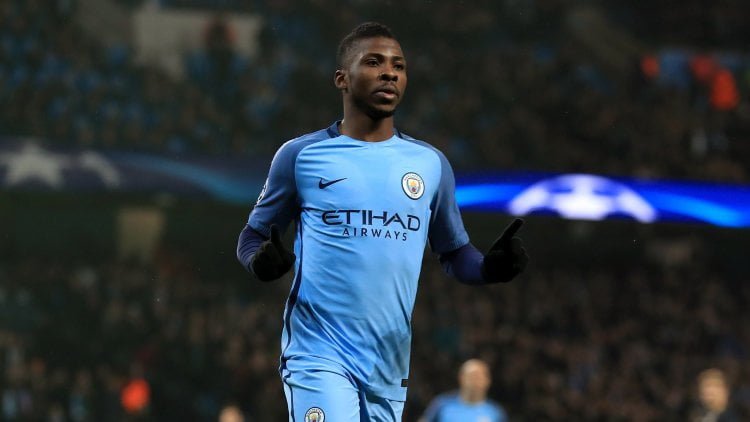 07 Dec Iheanacho ready to step up

Posted at 17:21h in Uncategorized by Peter Martin 0 Comments
0 Likes

Kelechi Iheanacho is ready for the challenge of replacing Sergio Aguero as the prolific Manchester City striker takes an enforced break.

Aguero, who has scored 16 times this season, will miss City’s next four games as punishment for his sending-off in last weekend’s stormy loss to Chelsea.

That means a chance for 20-year-old Nigerian Iheanacho, who played himself into form with a goal as City rounded off their Champions League Group C programme with a 1-1 draw against Celtic on Tuesday.

Iheanacho, who had made just six previous starts this season, said: “It’s a big opportunity for me now.

“Sergio’s not around so I have to take responsibility and fill the gap.

“I need to work really hard to prove myself to the team and help the team get these points we need in the Premier League.”

Iheanacho made a positive impression after being promoted to the first-team squad by Manuel Pellegrini last season, scoring 14 goals. He has found opportunities harder to come by since Pep Guardiola took charge in the summer, but has still struck five times.

His latest came in a pulsating start to a dead rubber against Celtic. With the group positions already finalised – City qualified in second place and Celtic finished last – the game had no wider meaning, but the teams began where they left off after September’s 3-3 draw.

Patrick Roberts, on loan to Celtic from City, struck against his parent club after just four minutes, but Iheanacho cancelled that out within four minutes. He might have had another soon after before the pace dropped as the teams went through the motions in the second half.

Pablo Zabaleta, who played in an unfamiliar midfield role, said: “It was a good game for Kelechi to play just thinking Aguero will miss the next four games.

“He played well and scored a great goal and he must be ready for the next few games because the manager will probably need him more than ever. It is important for him to take that chance.”

Roberts, who signed for City in an £11million deal in 2015 but joined Celtic on an 18-month loan in February, also caught Zabaleta’s eye.

The Argentinian said of the 19-year-old: “We know Patrick really well. He has been with us a short period, but enough to see how good he is.

“I was not happy when he scored, but I am pleased with what he is doing at Celtic. He still has a lot of things to improve, but he will become an important player for Manchester City in the future.”

The nine changes made by City indicated the greater importance of Saturday’s Premier League trip to champions Leicester.

Zabaleta said: “Always it’s a difficult place to go. Even if they are not doing great in the domestic competition they are still a good team, very competitive.

“It is going to be a tough game, we need to win and get three points after the big defeat last weekend to stay in the fight for the title.”