Jamie Vardy’s Having a Party 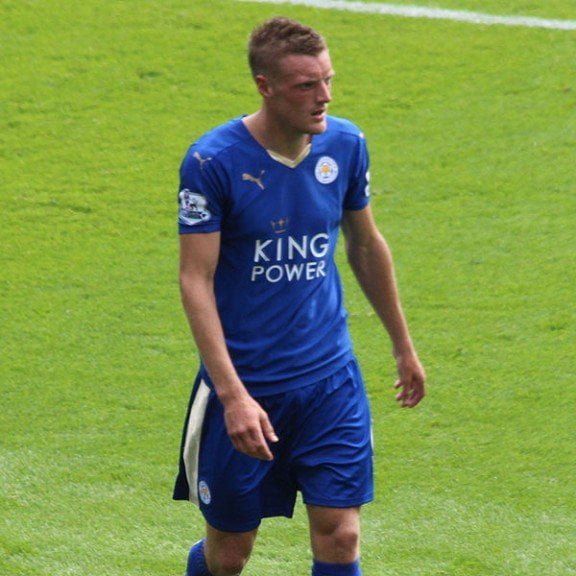 From the outset it looked as though Manchester United would control the game. Van Gaal set his team up with a 3-5-2 formation as Rooney was brought back into the side, but the England star was overshadowed by his fellow countryman as Vardy calmly went about achieving his objective – to score and beat Ruud Van Nistelrooy’s record.

Manchester City sat top of the Premier League after beating Southampton 3-1 in the 3pm kick off, however either Leicester or Manchester United could have gone top with a win. Manchester City remain top on goal difference.

The visitors controlled the first ten minutes, passing the ball around with ease. Ranieri sent his side out to allow Manchester United to control the game so Leicester could break with pace.

On the 23rd minute the Tinkerman’s plan was executed perfectly. Leicester City counter attacked from a Man United corner and it was Vardy through on goal. The move was lightening quick, the intensity was sublime and in just two passes Vardy had scored past a helpless David De Gea.

Vardy didn’t stop there. He fought; battled for every ball and assisted his team across the pitch. Ranieri’s fighting philosophy made it feel like they had three extra men at times.

Martial on the 38th minute created a chance for United when he dribbled behind the Leicester defence, but with no teammates nearby the ball went behind for a corner. United had chances but remained wasteful, with Rooney misplacing passes and giving the ball away. However, against the run of play Bastian Schweinsteiger headed home just before the half time whistle to level the game.

The second half commenced and Manchester United controlled the game. Leicester conceded corners and free kicks but Van Gaal’s side were unable to capitalise on the opportunity. In the 60th minute Okazaki was replaced by Ulloa to give Leicester a different option upfront. Both teams attacked in an attempt to win the match but the match ended 1-1 with both sides sharing the points.

The day will forever be remembered as the day Jamie Vardy broke the record for most consecutive goals scroed by a player in the Premier League.

Jamie Vardy – A Record to Remember

Jamie Vardy lost Daley Blind to slot home the opening goal and beat the ex-Manchester United striker, Ruud Van Nistelrooy’s, record. Where many players would have crumbled under the pressure, Jamie Vardy approached the game like any other. Let’s not forget, Jamie Vardy has worked his way up the leagues, playing for Halifax Town and Fleetwood Town before joining Leicester City for around £1.7 million in 2012.

After impressing in the Premier League, Vardy earned a place in the England squad as the 28 year old proved it’s not too late to be handed your first cap for your country.

Leicester City fans sang “Jamie Vardy’s having a party” as the first goal was scored and the Foxes talisman scored for the 11th consecutive Premier League game. Ruud Van Nistelrooy had held the record for 12 years. It’s an incredible record and a feat not likely to be bettered anytime soon. The achievement by Jamie Vardy is an outstanding example to any aspiring football player that grit determination, hard work and perseverance can yield record breaking results.