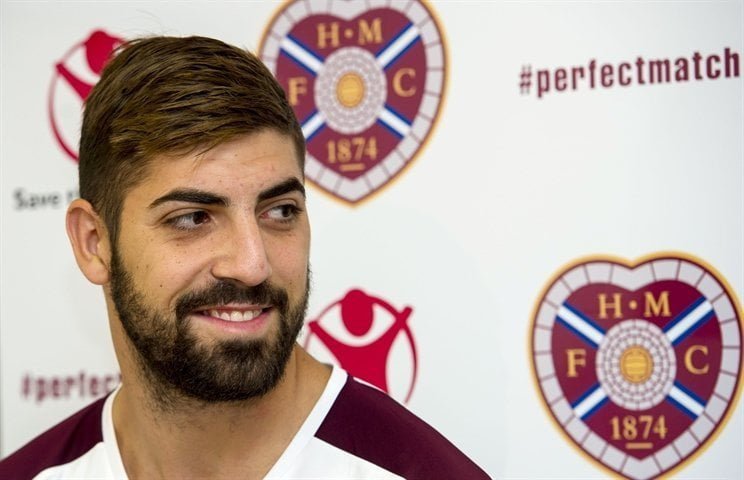 New signing Juanma Delgado says Hearts should be pushing to be in the top three of the Scottish Premiership this season.

The Spanish striker who signed a three-year deal from Greek Superleague side Kalloni was bullish about the Midlothian outfit’s chances at his unveiling at Tynecastle on Friday.

Robbie Neilson’s men have just been promoted to the top tier after emphatically winning the Scottish Championship and Juanma sees no reason why they can’t challenge for Europe.

“Robbie gave me the right feeling that this was a very ambitious club. He explained that he wanted me as part of the team,” he said.

“I think it’s going to be a really good season. I think Hearts will have a team that can be top three in the league definitely. I’m confident that I can be part of a team which qualifies for Europe.

“I think I will fit well into Scottish football with my style of play and strength and I’m looking forward to playing.”

Juanma joins fellow Valencian Miguel Pallardo at the club with whom he chatted to about moving to Hearts.

“I spoke to Miguel in the summer and he spoke wonders about both the city and the club,” he said.

“I like the city, the club, the support and the surroundings of the project. I can see it’s a club which wants to go to the top and I just felt it was the right decision for me.

“We had a little bit of work solving the paperwork with Kalloni and that’s been solved.”

The 24-year-old believes his time at Hearts could be a launch pad to bigger things down south in England.

He added: “I see Hearts as a great opportunity to take a big step forward professionally.

“I’d really love to be in a top league like the English Premier League in the future and I see this as a great opportunity.”