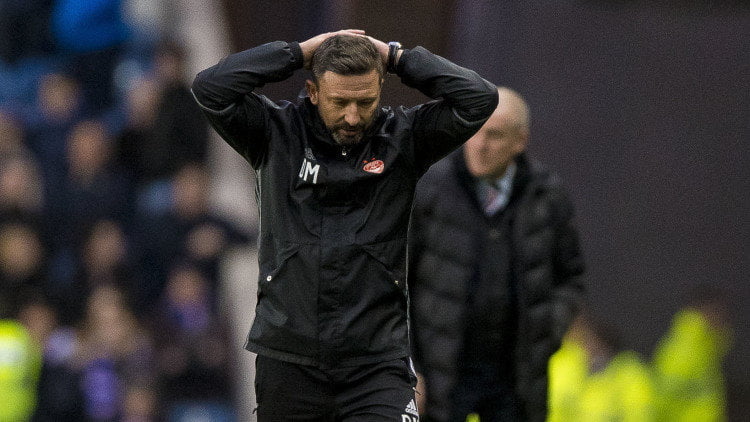 Posted at 23:17h in Uncategorized by Peter Martin 0 Comments
0 Likes

The Dons were lacklustre in their 3-0 defeat to Celtic in the Betfred Cup final at Hampden, and while their performance improved against Rangers in the Ladbrokes Premiership on Saturday, they left with a 2-1 defeat which leaves them five points behind the Ibrox club who moved into second place.

But the Granite City club have two games in hand over Rangers, the first of which is against Kilmarnock at Pittodrie on Tuesday night.

And although McInnes acknowledged the disappointment among the Red Army, he believes it is time for cool heads.

He said: “It’s been a tough week but it’s important we all stay calm. It’s two defeats in Glasgow to Celtic and Rangers and we’re back now at home.

“We’ve not been back at home since October so it’s good to get back to Pittodrie.

“We’ve now got three home games, which we want to try to maximise.

“If we can win all three home games, and there are no guarantees, then we’ll go back to second in the league.

“We know exactly what the team is capable of and hopefully we can show that starting with tomorrow night.

“Only Celtic have beaten us here this year and we want to continue our strong home form.”

After the Killie game, Aberdeen welcome St Johnstone and then Motherwell before facing Ross County in Dingwall with a trip to Fir Park also scheduled before Christmas.

A home game against Hamilton and a trip to Tynecastle to face Hearts completes the Dons’ fixture list before the winter break.

McInnes insists there is no need for despondency in the Granite City but stressed the need for unity.

He said: “There are still a lot of good things going on here, I know people are disappointed.

“I think the fans have had a tough nine days or so and I get that and feel for them.

“But it is important that we all stick together and get some wins on the board and come out of December in good shape.

“I like home games under the lights and hopefully we can take advantage of that.

“We’re used to winning at home, we enjoy playing at home, none more so than midweek games. It’s a busy spell for all teams but especially for ourselves.”