King: Rangers will invest whatever it takes to win Championship comfortably 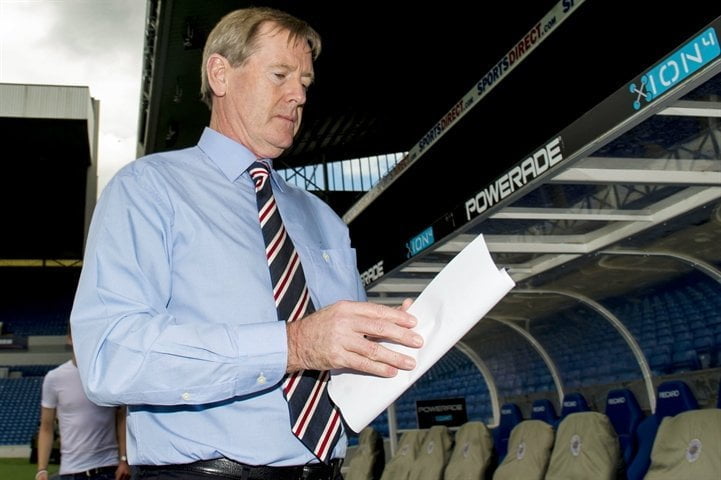 Rangers chairman Dave King has outlined his three-year vision for the club and says they will need to “over invest” and do “whatever it takes” to win the Scottish Championship “comfortably” next season.

The South Africa-based business man jetted into Glasgow to oversee the launch of the club’s drive for season ticket renewals, which he hopes will bring in at least £12 to £13 million in revenue for the club.

However, there is still a question mark over the vacant mansger’s position at Rangers and the squad at his disposal after 11 players were told they could leave Ibrox this summer.

King indicated that the process of looking for players had already began but that substantial investment was needed to have Rangers competing at the top level.

“The immediate mandate for the manager who comes in is that he will need to get additional players in.

“So there will be a fairly substantial investment required in the next couple of months from me and the other investors.

“But to look at the funding plan, it is to spend whatever it takes to win the Championship next year and have at least the nucleus of a squad to move up to the Premier League the year after.”

Stuart McCall was unable to guide Rangers to promotion after taking on the manager’s job on an interim basis in March but that has not jeopardised his chances of gaining the position full-time, according to King.

The Light Blues chairman refused to divulge details about the candidates involved, despite reports that former Brentford boss Mark Warburton is favourite to take over, but conceded that failure to achieve promotion has put off some potential managers.

“I think the club has made progress. It’s been a little bit frustrating from our point of view because it has taken longer than we would of liked,” he continued.

“But it has been necessarily long. Clearly the awkward parts of looking at the management situation has been the need to resolves the play-off issue.

“So I think it was important in terms of the season coming up and the market for available candidates that we did resolve that before making any progress in the negotiations.

“Stuart McCall is still involved as a possible candidate.

“I haven’t spoken to Mark Warburton but there are a number of people who the committee have spoken to. We are hoping to make progress within a week.”

He added: “I couldn’t give names but there were potential managers who dropped out of the race because we stayed down in the Championship.

“There are possibly five realistic candidates that might fit the bill. Obviously with a club like Rangers there are a lot names that do come forward but I think we have some clarity of what we require over the next couple of years.

“I think it is very important we balance the obvious urgency of making an appointment with the need to get it right.

“We need to make an appointment that sees us through for the next three years.

“I think he would be a manager but a coach in the sense 11 players have gone out so there is going to need to be a major rebuilding of the squad.

“We are going to try and now build up the squad with a level of player that we think will allow us to comfortably compete in the Championship but also players who can also compete in the Premier League next season.”

King has previously said it would take around £30m in investment to get Rangers to the top of Scottish football and now he says that investment would be accelerated.

“The only thing that has changed in my own personal thoughts over the last couple of weeks is the acceleration of that.

“I think it is very, very important that we win the league this year, so it’s probably the right thing to over-invest this season and make sure we do comfortably come out of the league and have a strong squad going into next season.

“The funding figure of what will be required is based on a number of things outwith our control. It would depend on our ability to renegotiate the commercial arrangements, the level of season-ticket uptake, whether we repay the £5million loan.

“So what I’m saying is the investment must be whatever it takes to comfortably win the league and substantially take us forward into the following season.”