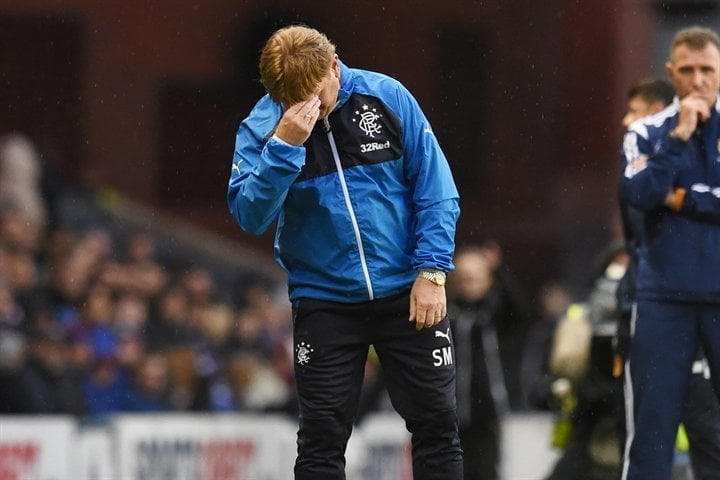 Rangers boss Stuart McCall says it’s now or never for the club after a shock 3-1 defeat to Motherwell in the play-off final first leg.

A deflected Lee Erwin strike and a Stephen McManus header had the Steelmen in control before half-time. Lionel Ainsworth looked to have killed the tie as a contest with a third shortly after the break.

However, Darren McGregor’s late header has given the Light Blues a lifeline and McCall has urged his side to seize it.

“What we have to do on Sunday is go and have a real go. We know we are out at this stage.

“We know if it was a cup final we would not get a second chance but we still have one.

“And while you have a second chance in football you have got to go and do everything you can.

“It will be interesting if we do go and get that first goal – but obviously then we need to go get another.”

McCall reflected on a bitterly disappointing night for the Championship outfit, which could ultimately leave them facing another year in the second tier.

“I’m hugely disappointed, that’s as poorly as we’ve been in possession of the ball since I’ve been at the football club,” he said after coming face to face with his old side.

“It’s so frustrating, but take nothing away from Motherwell. I thought they hit us on the break well. I’m sure had they played like that for the majority of the season they wouldn’t have finished 11th.

“But we gave the ball away cheaply too much. I cannot criticise the players because they’ve given everything since I’ve been here and have done well in the majority of the games.

“But tonight too many of us had off-nights.

“Darren McGregor’s late goal gives us a lifeline but Motherwell will be clear favourites and quite rightly so. The first goal on Sunday will be crucial and we’ve got to aim to get it.”