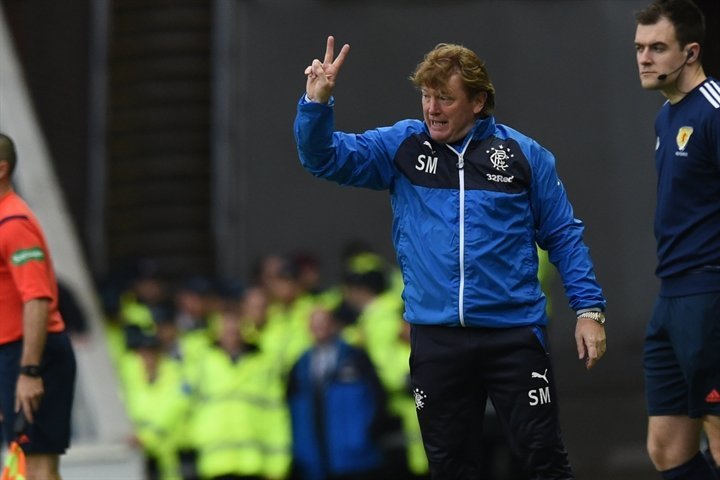 Stuart McCall has hailed Rangers’ gritty determination which saw them land a first-leg advantage in the Scottish Premiership semi-final play-off against Hibernian.

Goals from Nicky Clark and Kenny Miller have put the Light Blues in a commanding position but McCall conceded he would have settled for a draw just before they scored at Ibrox.

That was perhaps because Hibs looked comfortable and could have scored had Jason Cummings connected with Dominique Malonga’s cross but somehow contrived to miss from six yards out.

Nevertheless, McCall was pleased with the spirited performance but knows the tie is not over heading into the second leg at Easter Road on Saturday.

“Three minutes before half-time, I was probably thinking that 0-0 wouldn’t be a bad result. Because Hibs showed at times what a good footballing team they are.

“We were gritty, determined – we had to defend well.

“Hibs showed what a good, good side they are. I felt the first half was terrific, end to end.

“You could tell in the last 25 minutes who had been on the beach for a few days and who had been playing hard football because our energy levels dropped.

“We stuck in there, we had to defend some outstanding set-plays from Scott Allan. But we scored two really good goals so to come away with a 2-0, naturally I’m delighted.

“We have had fingers pointed at us – and rightly so – for losing goals and being a bit soft.

“But that’s two consecutive clean sheets against Hibs, who showed they are a really good side. Credit where credit is due. It was sheer guts and determination.

“Dean Shiels pulled out of training yesterday and was sent home. I didn’t expect him to play. He has come in wanting to play and we’ve had a couple of others with knocks and bruises. That shows the togetherness in that dressing room.

“But there is still a lot of hard, hard work to do. It puts us in a good position.”