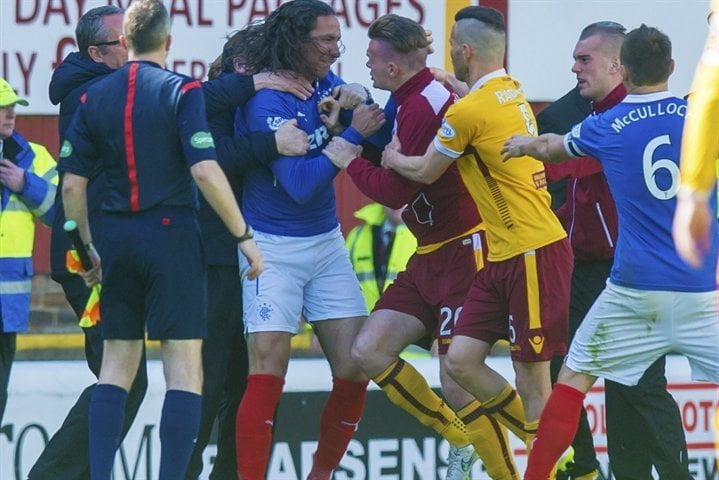 Former Rangers defender Bilel Mohsni has threatened to walk away from football after he was hit with a seven-game ban for his involvement in the Fir Park brawl after the Premiership play-off final between Rangers and Motherwell.

The Tunisian, who is no longer at the club, was handed the ban by the SFA after a disciplinary tribunal convened on Thursday and increased his original four-game suspension to seven.

The suspension will be tied to his player registration, which would kick in immediately if he signs for another SPFL side.

If, however, he signs for a club outwith Scotland which has been suggested by his agent Jerome Dakad, it will be up to that nation’s FA to implement the ban.

Speaking to Press Association Sport after the hearing, he said: “You know what? I don’t care anymore. If a manager trusts me, I will be happy to play for him. If no-one trusts me, it’s okay. I will find a job and work.”

Mohsni was charged with kicking and punching the former Motherwell striker Lee Erwin after he refused to shake the attacker’s hand and pushed him. The charge of “violently struggling” with Fraser Kerr – who was also sent off in the melee – was dropped.

But the defender still stands by his actions and said he was “upset” that no punishment was given to Erwin, insisting it was “very harsh”.

“If you see everything on the video, it is clear if he had not pushed me I’d have gone away and would be back in France on holiday right now, not coming back to Glasgow for a hearing,” he continued.

Mohsni also had a swipe at former Light Blues boss Stuart McCall, he said: “He didn’t think I was good enough to play for him. I played against Queen of the South when we lost 3-0 and he blamed me for the game. So I was like, ‘Wow, this manager doesn’t like me. Okay, no problem’.

“But when I heard what he said after the play-off, I was like ‘Wow, wow, wow’. Normally every manager protects their player, whether they are wrong or not.

“Him? He didn’t have a job and he was still like ‘I’m not going to re-sign him’. But he didn’t have the job so why is he speaking?

“After May 31 both of us were out of a job, so it was not his business to speak about me.”