PFA nominee Stewart thought he might not make it 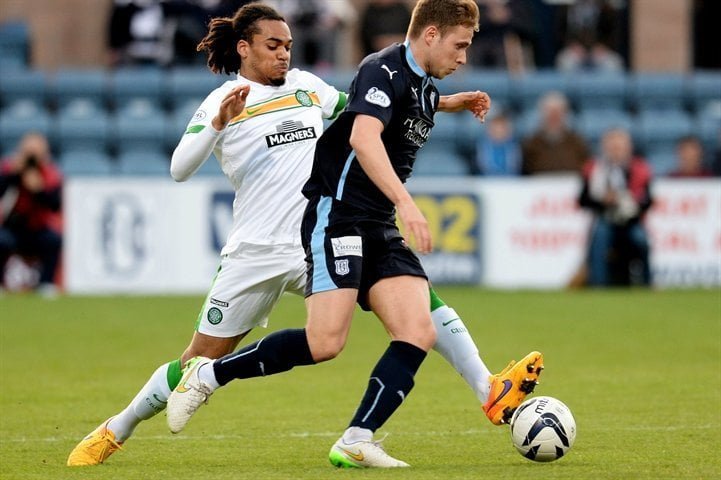 Dundee striker Greg Stewart admits he thought his chance in professional football had passed him by whilst he was working at Grangemouth oil refinery a couple of years ago, now, he’s sharing the spotlight with the cream of the crop in Scottish football.

The 25-year-old, in his first season in the top flight, has been in impressive form for the Dark Blues netting 15 times in 35 games, which has earned him a spot on the PFA Premiership Player of the Year shortlist alongside Celtic duo Stefan Johansen, Virgil van Dijk and Aberdeen’s Adam Rooney.

But he admits the recognition from fellow pros such as Celtic stars Johansen and Van Dijk left him “flabbergasted”.

“There are a lot of top players there. Johansen is an internationalist and I’m sure him and Van Dijk could play down in the English Premier League; Rooney he’s scored a lot of goals this season as well.

“I’m a wee bit flabbergasted to be honest. I voted for Johansen myself and to be voted by players of that calibre I’m delighted.

“To get the nomination is a wee bit surreal as it’s only my first season in the top flight and I managed to score a few goals.

“My target was initially just to get into the team first of all but other than that I hadn’t set myself any goals.”

Stewart concedes he thought his chance of being a footballer had gone. The attacker played part-time football for Cowdenbeath last season, whilst working at the oil refinery in Grangemouth and he said it was hard going.

“I got up at six in the morning Monday-Friday, then had to rush home from work to make training so I wasn’t getting much rest and I’ve got a wee one as well whom I didn’t see much of.

“When I got the chance to become a full-time footballer I just managed to grab it with both hands.

“There was a point where I maybe thought my chance was gone but I kept on working hard and managed to get a few goals last season.

“Paul Hartley took a chance on me in the summer, I’ve learned a lot from him and hopefully I’ve repaid him.”

Dundee ensured a place in the top six just before the split and, with Hartley signing a new three-year deal at the club, Stewart believes they can target Europe next season but he hasn’t given up hope of sealing fourth spot and a potential place in Europe this year.

“There seems to be a bit of stability at the club, which hasn’t been there before and if we can keep the core of the squad for next season then hopefully we can kick on and try to get into Europe.

“When I first signed Hartley said he wanted to try to compete with United across the road because they’ve been doing really well the last few years.

“There’s five points between us and United so hopefully we can push on and get that fourth place.”