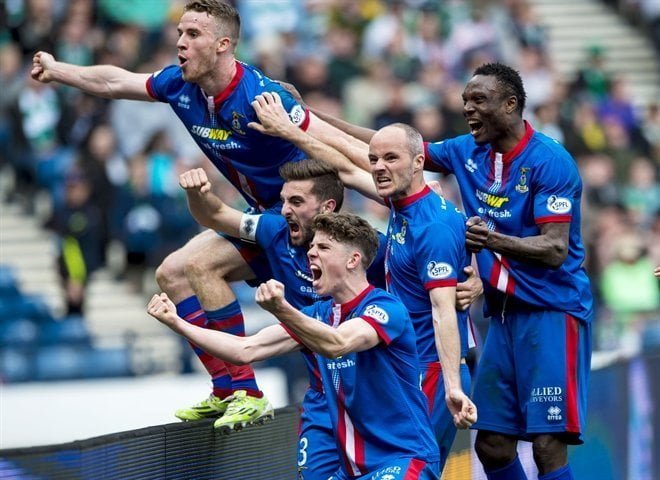 There will be no Ronny Roar at Hampden in the Scottish cup final and the ‘treble yell’ has also been silenced by John Yogi Hughes and his highland warriors.

Let’s cut to the chase, the referee Steven McLean and his goal-line official Alan Muir had a nightmare. How they didn’t spot Josh Meeking’s hand-ball to stop a certain goal from Leigh Griffiths beggars belief.

Celtic should then have been awarded a penalty and a sending off for Meekings, it didn’t happen.

Add to that Craig Gordon correctly being sent-off for bringing down Marley Watkins in the box and you sensed it wasn’t going to be Celtic’s day as Greg Tansey slotted home the penalty to draw Caley level in the second half.

15 years ago Inverness were going ballistic at upsetting Celtic in the cup, nowadays, you expect it.

Let’s take nothing away from Inverness, they deserved their win and now stand on the verge of winning their first major trophy in their history against Falkirk in the final.

John Hughes is my manager of the year right now. He’s guided Caley to third in the table on a fraction of the budget of Celtic, Aberdeen and Dundee United and all this secured without his top striker Billy Mackay, who was sold in the January transfer window.

Calls for Robbie Neilson in a lower league with Hearts to get the manager’s award are merited, but it’s not on the same level as Yogi’s achievements for me.

In contrast, let’s look at Ronny and his constant roar for the treble. It was waiting to come back and bite him on his buttocks and thankfully, David Raven’s winner in extra-time spared us all the thought of Ronny dropping his trousers Norwegian style to celebrate.

The young Celtic manager has a lot to learn, better men and far better teams have failed to win a treble in the club’s history. Someone should also take him aside and mention that other clubs and managers in Scotland deserve a little more respect.

Now, after failing to win the treble, possibly winning the double seems scant consolation because of his bragging about what they were going to do.

In the summer, Ronny’s biggest job will be clearing out more deadwood from what should be a title winning side, but it’s not in the bag yet.

The previous Celtic manager, Neil Lennon had the 2014 title wrapped up before the end of March with one defeat, three draws and seven games to spare.

Ronny Deila’s 2015 side need ten more points and any slip up on Wednesday at Dundee might just set the alarm bells off and re-ignite Aberdeen’s quest for silverware.

Well done to John Hughes and everyone connected with Inverness, I have a feeling Yogi is about to etch himself into the history books come May in a final that no-one predicted.