Scotland 1-0 Qatar: Scots warm up for crunch Euro 2016 qualifier against Ireland with win 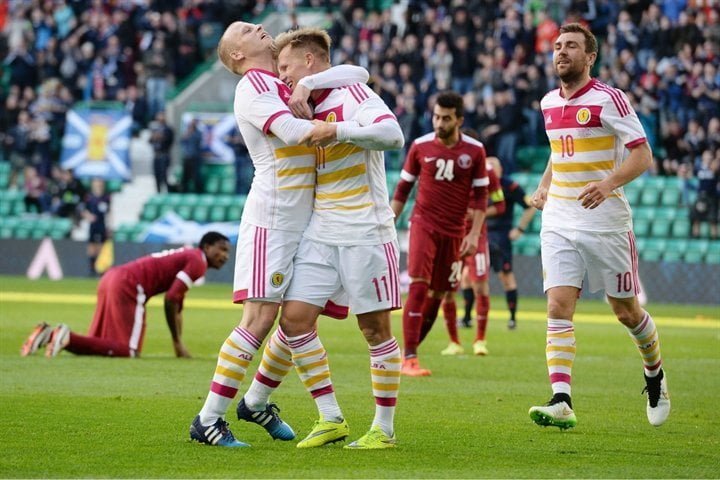 Scotland warmed up to their huge European Championship qualifier against Republic of Ireland next Saturday with a comfortable 1-0 victory over Qatar.

The Scots created a host of chances before Matt Ritchie grabbed his first goal for his country just before half-time.

Steven Naismith had a chance to double Scotland’s lead but his effort was denied by the post.

Qatar rarely troubled the back four while the Scots could have added to the scoreline, but in the end had to settle for just the solitary Ritchie strike.

It wouldn’t have been viewed as a glamour friendly but it was a worthwhile exercise before facing Ireland in Dublin at the Aviva Stadium next week.

Strachan gave a run out to those who had seen very little competitive action since the end of the season and he would have been relieved to see his players came through the 90 minutes unscathed.

The Scotland boss had mentioned beforehand that he didn’t like friendlies as a player as they lacked an edge and this game was no different as often it was played at a pedestrian tempo.

He gave Celtic duo Charlie Mulgrew and James Forrest a start while there were places for a number of English Championship players who hadn’t featured since early May.

Despite a subdued atmosphere at Easter Road, due to sections of the Tartan Army boycotting the match in protest at human rights issues in Qatar, the hosts started brightly.

Forrest had an effort blocked by Ahmed Al Sayed before he played in Craig Forsyth down the left, whose cutback found Naismith but his effort was comfortably saved.

Anya, who slotted in the unusual right-back role, demonstrated a lovely piece of skill but the finish was unable to match the footwork as he slashed his shot wide.

Forrest was proving a nuisance up against Mohammed Tresor. He slid the ball into Naismith who forced a decent save out of Amine lecomte and Mulgrew couldn’t capitalise from the resulting corner as he put his free header wide from Shaun Maloney’s delivery.

Ritchie then spurned a great opportunity when Forsyth found him in space but his volley was poorly executed. However, the Bournemouth man atoned for that miss when Naismith’s pass fell to him and he slotted home from just outside the box.

Scotland almost doubled the lead before the break when James McArthur chipped a lovely pass into Naismith but the Everton striker saw his effort clip the post.

There were concerns for Naismith when he clattered into goalkeeper Lecomte early in the second half but he recovered before firing a volley into the side netting and being replaced by Leigh Griffiths.

Scotland were rarely troubled but when Anya lost Abdelkarim Hassan for a split second it looked ominous however the 27-year-old recovered well to get in the block.

A Scotland corner led to rapid Qatar counter the ball eventually was played out wide to Hassan Khalid who forced substitute shot-stopper Craig Gordon into his first meaningful save.

Scotland subsitute Johnny Russell had a glorious chance to finish with a flourish but couldn’t convert Griffiths’ tremendous delivery before the Celtic striker thought he had scored but was flagged offside.