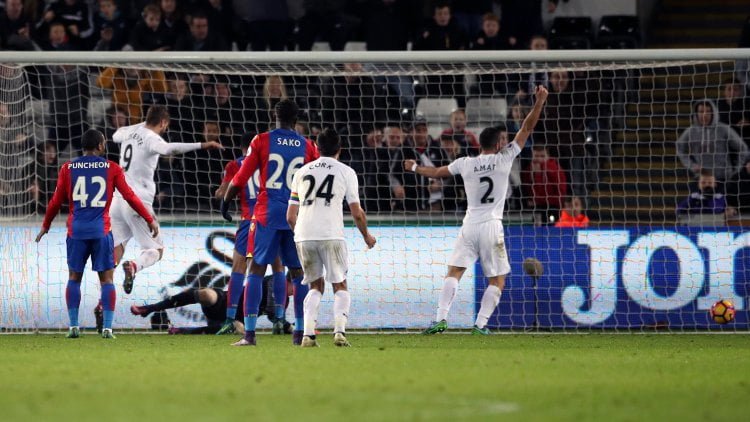 Posted at 17:49h in Uncategorized by PLZ Team 0 Comments
0 Likes

Palace – who had earlier led through Wilfried Zaha’s 19th-minute goal – were 3-1 down before James Tomkins (75), a Jack Cork own goal (82) and Christian Benteke (84) turned the game on its head.

But Swansea, who had seen Leroy Fer add a second-half double to Gylfi Sigurdsson’s superb free-kick, claimed a first Premier League win since the opening day of the season when Llorente twice finished from close range.

It was Palace’s sixth straight defeat – and surely the cruellest in that stretch – with Pardew’s position set to be the subject of more speculation.

Swansea set themselves up like an away team, with Sigurdsson operating as a false nine, and were keen to utilise the pace of Modou Barrow on the break.

The result was early Palace possession and pressure, with Benteke wasting an inviting opening after some pinball in the Swansea box.

Barrow burst away from Martin Kelly to set up a chance which Sigurdsson scuffed straight at the grateful Wayne Hennessey.

But Palace were ahead after 19 minutes and it was entirely predictable as Swansea’s aerial struggles were exposed against the powerful Benteke.

The Belgian nodded the ball down into the path of Zaha and the winger made the most of some timid defending from Neil Taylor and Federico Fernandez to fire his fourth goal of the season past a helpless Lukasz Fabianski.

Swansea’s shortcomings at the back were again underlined when Fabianski was forced into a smart save at the foot of a post after Kelly’s cross found Connor Wickham unmarked.

But the mood changed inside the Liberty Stadium when Jason Puncheon was adjudged to have fouled Cork on the edge of the area.

Palace were clearly not happy with the decision and took an age to get their wall back 10 yards, but when they did Sigurdsson struck a terrific free-kick which left Hennessey rooted to the spot.

It was a lifeline for Swansea as they had rarely threatened up until that point, but they almost threw it away two minutes later when Zaha headed Yohan Cabaye’s cross against the crossbar before the ball was bundled to safety.

Palace lost Wickham after the break – the forward was taken from the field on a stretcher with what appeared to be a knee injury – and were being pushed back as Sigurdsson and Barrow became increasingly influential.

Tomkins produced a brilliant last-ditch tackle to deny Barrow after Jay Fulton had split the defence, but Swansea were soon ahead, with substitute Llorente’s first touch proving crucial after 66 minutes.

Llorente headed goalwards and, although Cabaye stopped the ball on the line with the possible use of an arm, there was Fer to squeeze home the rebound.

Two minutes later Palace struggled to cope with another set-piece and Fer finished again at the far post for his sixth goal of the season.

But Palace gave themselves a lifeline when Tomkins bundled home before Zaha’s cross struck Cork and looped over Fabianski in agonising fashion.

And Palace were incredibly in front when Benteke found the net off a post in a crowded goalmouth.

B ut Swansea were not finished yet and Llorente – dropped at Everton last week – diverted home a Sigurdsson shot before prodding in the winner to send the Liberty Stadium into raptures.