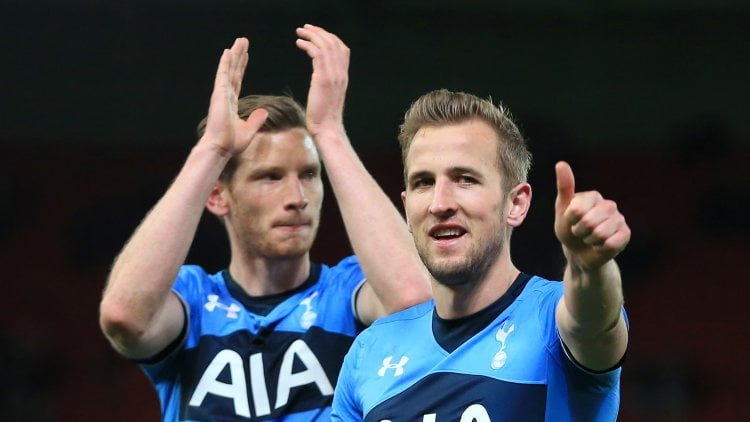 Tottenham boss Mauricio Pochettino felt his men issued a major statement to title rivals Leicester with a “perfect” performance as they thrashed Stoke 4-0 at the Britannia Stadium.

England stars Harry Kane and Dele Alli notched two goals apiece as second-placed Spurs cut the gap to the Foxes to five points, with each side having four more games left to play.

Asked afterwards if he thought Leicester – who drew 2-2 at home against West Ham on Sunday – were feeling the pressure, Pochettino said: “I don’t know – I am very focused on our team and our job.

“But all can happen in football. The most important thing is that the performance we showed today was perfect. It was a big signal that we are there waiting and fighting.”

Striker Kane had made clear in the build-up Tottenham’s intention to hunt down Leicester, posting a picture of a group of lions on Instagram on Sunday.

Pochettino was aware of Kane’s post and said: “I think it is a good thing because it shows how the group is, how our squad is – we can win or not, but the desire and passion we show and how we enjoy the game is fantastic. It is a pleasure to work with them.”

On a night when so many Tottenham players shone, Kane and Alli put in fine displays as they took their Premier League goal tallies for the season to 24 and 10 respectively.

Each demonstrated wonderful finishing technique – although that also deserted Alli at one point when he rounded Stoke goalkeeper Shay Given only to shoot against the post when it looked easier to score.

Pochettino had looked angry about the miss at the time, but said afterwards he had only said “congratulations” to the 20-year-old midfielder immediately following the final whistle.

The Argentinian added: “He played very well – I think all the team did.

“Sometimes it is difficult – he is very young and some ups and downs is normal.

“He showed unbelievable skill to score two goals, as well as miss one clear chance.

“But today for me we need to give the credit to the whole team because the collective effort, the mentality we showed and the way we played was fantastic…

“They deserve all the credit today and from the beginning of the season – they have worked very hard to arrive at this moment, where we are trying to put pressure on Leicester to reduce the gap. This is our dream. We need to try, and believe.”

Stoke boss Mark Hughes – whose ninth-placed side have won only one of their last six games – also had plenty of praise for Tottenham and suggested they may well overhaul Leicester.

“We are disappointed with what we produced,” Hughes said.

“But Spurs on the night were very impressive – stronger, faster and they had more power in the team that what we were able to put out there.

“Sometimes you have to give credit to the opposition. They are quick and sharp and have got that edge that chasing major trophies gives you.

“With their mentality at the moment, you wouldn’t bet against them catching Leicester.”