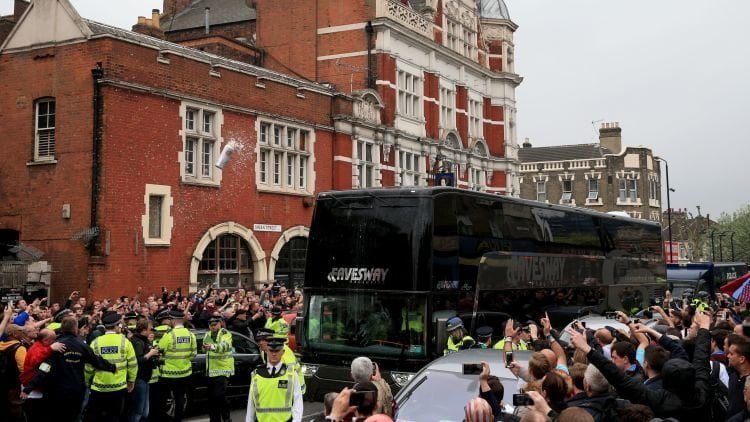 West Ham have promised to ban for life any fans found to have been involved in ugly scenes which marred their last-ever match at Upton Park on Tuesday night.

On the pitch, the Hammers signed off in style as Winston Reid’s header completed a come-from-behind 3-2 win over Manchester United, but kick-off had been delayed for 45 minutes after United’s coach came under attack on its approach to the stadium.

Bottles were also thrown at United goalkeeper David de Gea during the match, while another fan invaded the pitch to confront the Spaniard.

“We have already had thousands of Tweets and emails from fans to say how proud they were to be a part of such a special evening in West Ham’s history.

“However, we are aware that there were some supporters outside the Boleyn Ground who didn’t act in an appropriate way when the Manchester United team bus was damaged.

“That was not acceptable and we will work with the police to identify those responsible and ban them for life.”

The statement came after West Ham co-chairman David Sullivan – apparently unaware of the scale of the trouble outside the ground – initially blamed United for the delay to kick-off, and said match officials and police had been ‘kind’ to the visitors.

”It is depressing really,” he told BBC Radio Five Live.

”It will be a late night for our fans and some of them won’t be able to stay. I don’t understand why United couldn’t get here at 4pm. They could have got here early. They knew it would be busy. It’s crazy.

”There was congestion in the street and they couldn’t get the coach in. There were people around the coach, but there was no attack on the coach.

”If you check the coach there won’t be any damage to it. If we arrived late at Old Trafford they wouldn’t put the kick-off back.”

The Metropolitan Police confirmed that one officer and a member of the public sustained minor injuries in the trouble.

A statement from the force said: ”We are aware that a number of items were thrown towards Manchester United’s coach this evening, Tuesday, 10 May.

”One police officer and a member of the public sustained minor injuries.

”There have been no arrests. An appropriate policing plan is in place.”

United’s departure was also delayed as a result of the trouble, as they were forced to wait until after midnight for a replacement coach to arrive.

A number of West Ham players were also held up as their cars were blocked in by the stricken coach.

The FA released a statement saying it would launch its own investigation into the unrest – including the incidents during the match.

The statement said: “The FA strongly condemns the unsavoury incidents this evening involving both the Manchester United team coach outside West Ham United’s Boleyn Ground and objects thrown from a section of the home support during the game.

“We will work closely with both clubs and the Metropolitan Police to fully investigate these matters.”