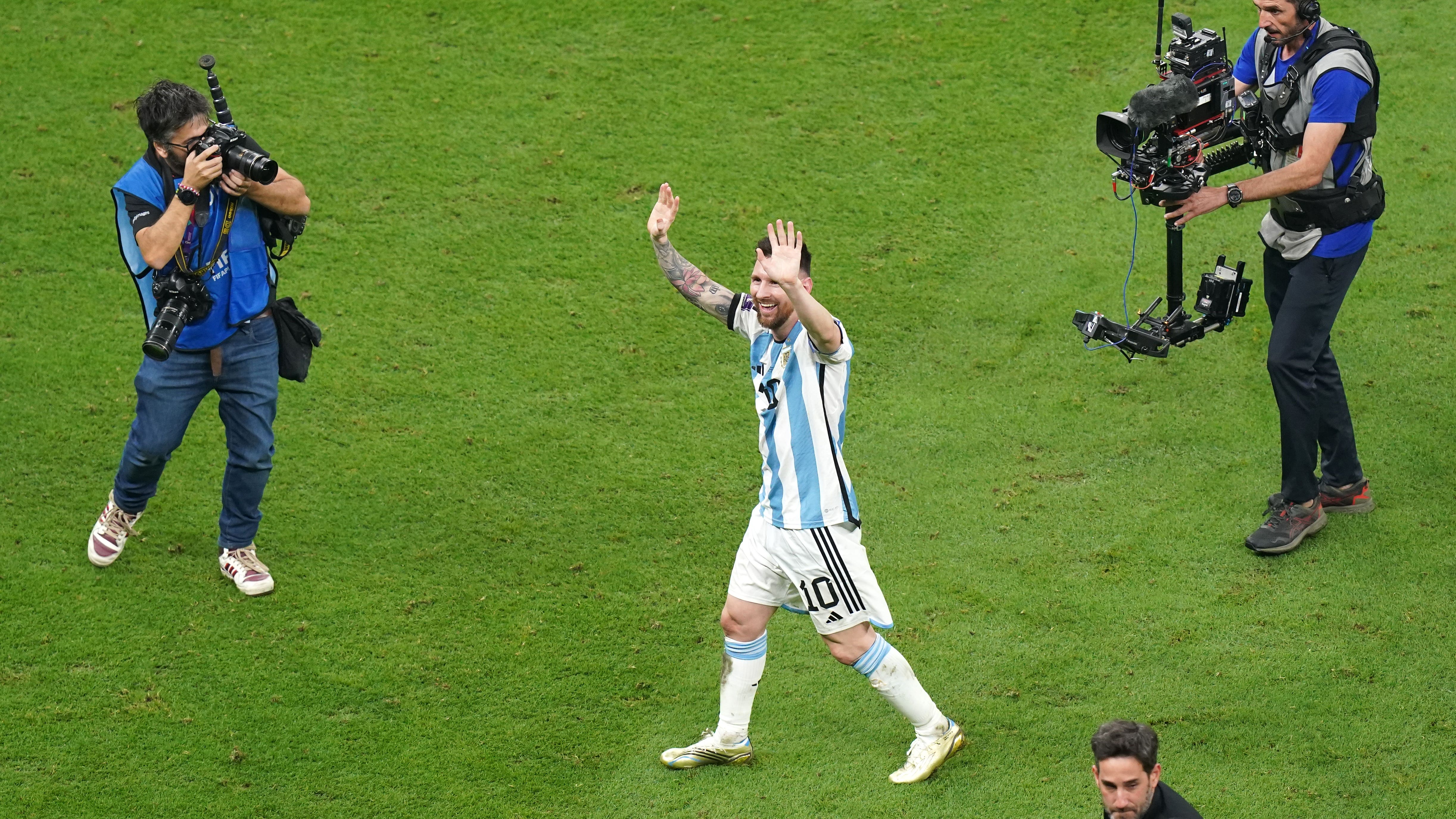 Lionel Messi’s World Cup triumph is the culmination of one of the most astounding careers the game has ever seen.

The Argentina captain has surely put an end to the debate of who is the greatest player of all time.

Even before he scored twice in the extraordinary 3-3 draw against France in Lusail, and rolled in his penalty as his side won the shootout, based on numbers alone Messi had a strong claim to be considered the ‘GOAT’.

The argument is all but over. Messi’s early penalty and extra-time strike in the final took his tally to 13 goals at World Cups, on his record 26th appearance at the finals.

They were his 97th and 98th goals for his country in 172 matches and his sixth and seventh in Qatar, meaning he is the first player to score in every round.

Yet these figures do not even do him justice.

As well as being a prolific goalscorer, Messi is a magical playmaker blessed with amazing ball control, nimble footwork, a sharp eye for a pass and an equally devastating ability to deliver it.

“He is the best I have ever seen and probably the best I will ever see,” said his former Barcelona manager Pep Guardiola in one of many tributes over the years.

Messi dovetails beautifully with the players around him, most famously with Xavi and Andres Iniesta in his early years at the Nou Camp and later with Luis Suarez and Neymar in a formidable Barca forward line.

His dynamism is not only a result of his sublime natural talent, but from his dedication, work ethic and will to win. This is a potent combination and rarely do his standards seem to slip, even with the pressures and expectations that accompany being one of the world’s most recognisable and popular athletes.

He has coped well with the limelight. While his fame and commercial potential was undoubtedly a major factor in his late-career move to Paris St Germain in 2021, it was not something he has actively sought at every opportunity.

Indeed, in contrast to his great contemporary Cristiano Ronaldo, he often comes across as humble and unassuming, and this is part of his appeal.

“I just wanted to surpass myself, to be the best I could be, and not better than any other,” Messi said when reflecting on his career in 2021.

Whether he has actually supplanted the likes of Pele and Diego Maradona to be regarded as the greatest of all time was a matter of debate, until now.

There may not even have been a definitive settlement to deliberations over whether he or Ronaldo was the greatest of their generation, such did the pair match each other goal for goal, and Ballon d’Or for Ballon d’Or for a while.

But contrast Ronaldo’s tearful Qatar exit – having been reduced to a role of Portugal substitute – with Messi’s glory night, and the answer is clear.

Few can touch what he has achieved in the club game, either. The Champions League in its modern guise is a challenge Pele and Maradona never encountered and Messi has delivered in it year after year.

He was the inspiration for Barca’s successes in 2009, 2011 and 2014 after also collecting a winner’s medal in 2006, when he missed the final through injury. He currently has 129 goals in the competition to his name, 120 of which were for Barcelona.

Admittedly Ronaldo has eclipsed Messi both in terms of Champions League wins and goals but in the years the pair went head to head in LaLiga, it was the Argentinian who edged it.

“I have no doubt that Lionel Messi has made me a better player and vice-versa,” said Ronaldo. “When I am winning trophies it must sting him and it’s the same for me when he wins.”

Ronaldo won the league ‘only’ twice in his nine seasons with Real Madrid and finished top scorer three times compared to Messi’s five. Messi actually claimed the top scorer accolade eight times overall before his move to PSG and remains the competitions all-time leading scorer with a phenomenal 474 goals from 520 appearances.

Messi broke into the Barca team at the age of 17 in 2004 and was their greatest goalscorer by the time he was 24. He netted 672 goals in 778 games and won 34 trophies with the Catalan giants.

That represented some return for a club that took a risk on Messi at the age of 13. As a teenager, he had required treatment for growth hormone disorder, something his parents could not fully afford in Argentina. Barcelona’s offer to fund the treatment proved decisive in his family’s decision to relocate to Spain from Rosario.

His time at Barcelona came to an abrupt end with a financial crisis preceding his move to Paris.

On the international front, Messi’s career has been more up and down. He was not initially taken to heart in the way Maradona was and he briefly retired from the scene in 2016 after losing a fourth major final.

Yet his role in winning the 2021 Copa America went some way to establishing a more befitting legacy – and Qatar 2022 saw him transcend all who had gone before him.