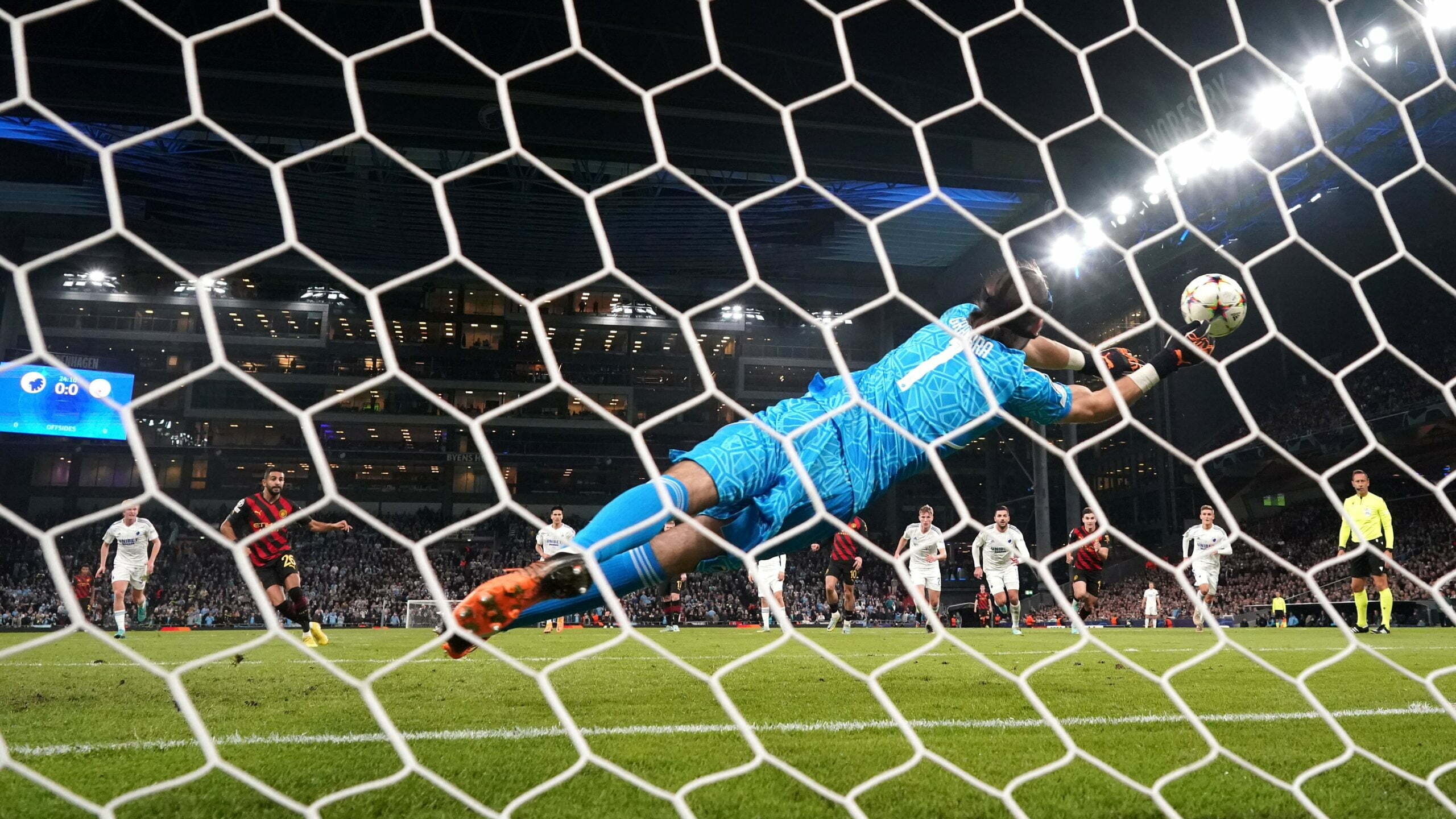 Manchester City rested Erling Haaland, failed to score and had Sergio Gomez sent off in a frustrating VAR-dominated goalless draw with FC Copenhagen on Tuesday.

Rodri also had a goal disallowed and Riyad Mahrez missed a penalty after referee Artur Dias made repeated visits to the pitchside monitor at a raucous Parken Stadium.

The stalemate still all but guaranteed City’s place in the last 16 of the Champions League for another year – but it was not a night that will live long in the memory.

All of the main talking points came in the first half and it was remarkable the Group G clash remained scoreless.

Yet with the prolific Haaland on the bench for the first time this season, City were not at their fluent best and Copenhagen tested them much more than in last week’s 5-0 thrashing in Manchester.

There was a heart-in-mouth moment for goalkeeper Ederson after just four minutes when he miscontrolled a backpass to concede a corner. For a split-second, he appeared to think the ball was rolling towards his own goal.

City thought they had taken the lead when Rodri fired a crisp shot into the top corner from outside the area after 11 minutes.

Yet, in what was to become a common theme, the Portuguese referee was invited to have a second look. Much to City’s consternation, he ruled out the strike for handball against Mahrez in the build-up.

Mahrez looked like being the beneficiary of the VAR’s intervention soon after, however, when Artur awarded City a penalty following another review.

There was then further drama at the other end when Gomez tangled with Hakon Haraldsson on the edge of the area. Artur initially allowed play to go on but, after later studying replays, decided to send the City left-back off.

Replays suggested Copenhagen might even have had a case for a penalty but they had to settle for a free-kick on the edge of the area, which came to nothing.

Forced to play with 10 men for an hour, City manager Pep Guardiola decided to sacrifice Mahrez to send on an extra defender in Ruben Dias. The visitors unusually lacked cohesion and, spurred on by a vociferous home crowd, Haraldsson shot narrowly wide.

City started the second half stronger with Kevin De Bruyne forcing Grabara to make a good save but Copenhagen continued to frustrate them.

The hosts enjoyed some good possession and Isak Johannesson was close to turning in a dangerous low ball across the box.

The game fell flat and there was a shortage of goalmouth action until Joao Cancelo tested Grabara from distance late on.

The introduction of Phil Foden could not spark City and the game petered out.