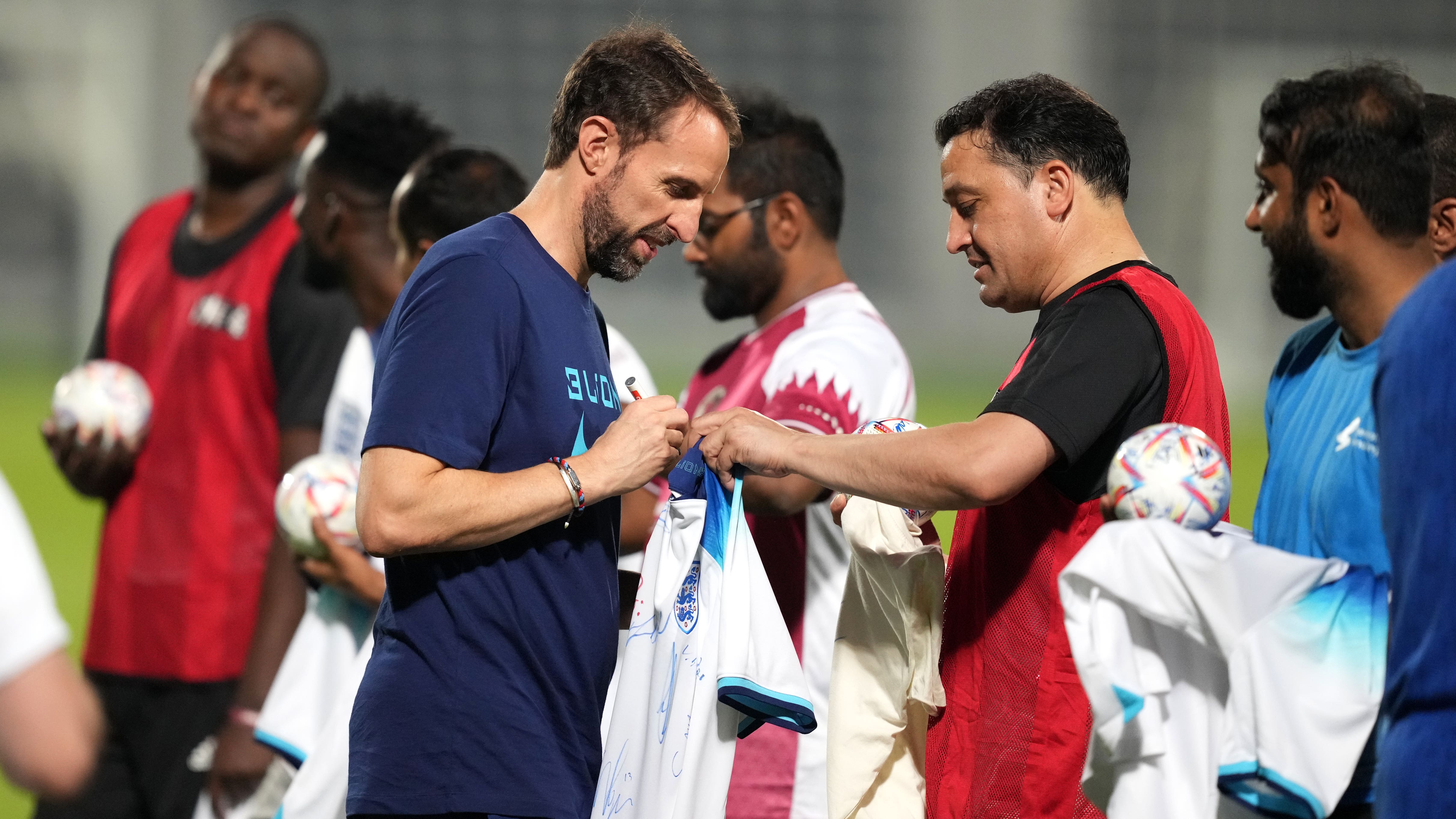 Gareth Southgate believes England have “made a rod for their own back” by speaking out on human rights at the World Cup but will not stop his players from talking on such issues in Qatar.

FIFA president Gianni Infantino wrote to all 32 competing nations earlier this month urging them to focus on the on-field action and “not allow football to be dragged into every ideological or political battle that exists” during the contentious tournament.

Southgate has been asked about human rights issues in Qatar right back to England’s qualification campaign and his players have also fronted up when questions surrounding the treatment of the LGBTQ+ community and other societal talking points have been raised.

Harry Kane is one of several national captains planning to participate in the ‘OneLove’ campaign during the tournament to oppose discrimination while England travelled to Qatar on Tuesday on a plane named ‘Rain Bow’ – the symbol of LGBTQ+ pride.

Leicester midfielder James Maddison was the first player to face the media and was asked about LGBTQ+ rights, saying the squad “stand for diversity and inclusivity”.

Southgate – who along with his squad on Thursday met migrant workers at England’s Al Wakrah training base – believes the expectations on players to speak out on political points has risen in recent years but, while he is keen for it to not impact on performances, he wants them to voice their opinions.

“We are now asked more of those types of questions than ever before,” he said.

“Perhaps it’s because we’ve made a rod for our own back in that we’ve dealt with some pretty hefty issues fairly well, I think, as a group.

“But the reality is, very few of us were university educated, we’re doing our best to make sure that we’re as informed as we can be and I think we will speak up when we think we can make a difference.

“I think that the background to why they have had that awareness and have had that impact is because their upbringings have been so diverse.

“I think the diversity of the team brings that difference in thinking because of the experiences in their own lives.”

A collective experience for much of Southgate’s squad has been suffering racism in recent years – with both Bulgaria and Hungary hit with sanctions after their fans hurled abuse during matches.

“We’ve then also been thrown into situations where we’ve had to deal with a team with racism,” Southgate told BBC Radio 5 Live.

“For example, in Bulgaria, where probably 20 years ago, we wouldn’t have even discussed it, taken any action or thought about walking off a pitch or anything like that.

“So society has also changed and I think there are different expectations around that. I think it’s always my job to try to protect the players, I’ve got to lead them as well as I can, but also protect them and make sure they’re able to focus on the primary objective over the next few weeks.

“So we’re not going to duck questions on human rights issues in Qatar, for example, but we’ve also got to be conscious of how much we can affect and also make sure that it’s not taking more energy and more time away from the focus of getting the team to the best possible level.”

Speaking of his own role as someone who has become something of a spokesperson for the nation during recent times, Southgate feels he may have had it harder than his predecessors.

“We’ve lived through a period where there have probably been more off-the-field situations to deal with than periods I can remember in my playing career,” he added.

“But maybe my managers with England did have to deal with that, it’s hard for me to think back to what they might have dealt with.

“It certainly feels as though there is more demand in commenting or being aware of social issues and how you might be able to influence and affect them.

“I understand that, it’s a role where we can make a difference and that’s part of the privilege of the job that you can affect things in a positive way but of course, I’ve got to get that balance right that people expect us to win football matches and they want to see me focusing my energy and time on that.

“If we’re talking about taking this role six years ago and now… you’d be pretty dumb if you didn’t learn a bit in that six years really!”