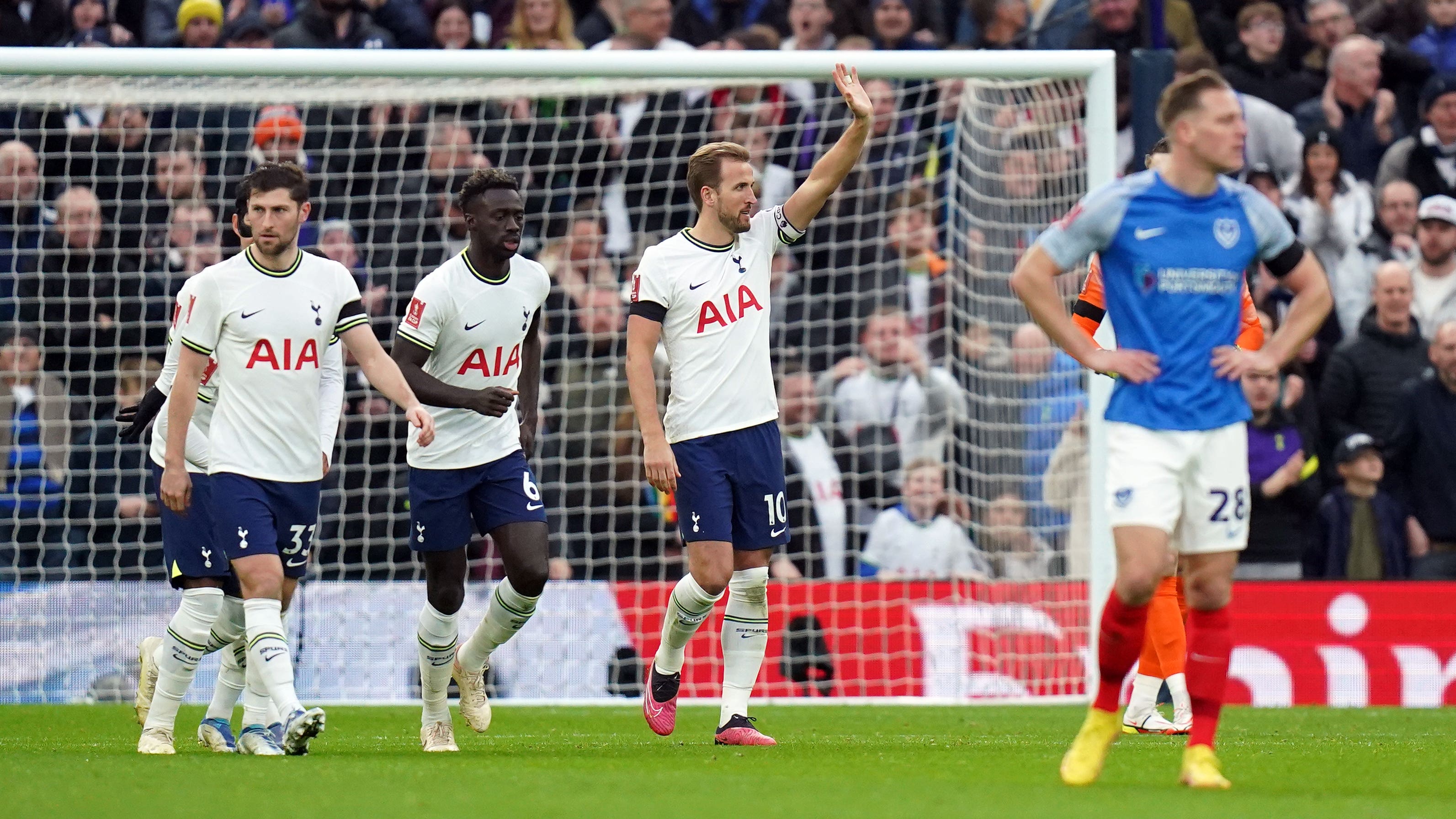 Harry Kane edged ever closer to Jimmy Greaves’ scoring record for Tottenham with the only goal of the game to down Portsmouth in the third round of the FA Cup.

Kane’s 50th-minute curler moved him onto 265 goals for his boyhood club, one away from Greaves’ tally which has stood for more than half a century, and saw Antonio Conte’s side edge past a dogged Pompey outfit.

With Dejan Kulusevski, Lucas Moura and Richarlison all injured, Spurs were once again reliant on this season’s top scorer Kane, who grabbed his 17th goal in all competitions after a lacklustre first half.

Sky Bet League One opponents Portsmouth more than held their own but rarely threatened the hosts’ goal and bowed out against a youthful Tottenham team containing six players aged 23 or under.

This was a first meeting between the teams since the 2010 FA Cup semi-final at Wembley, which saw Pompey win 2-0 after extra time.

The two clubs have embarked on different journeys since, with the visitors languishing in the third tier while Spurs, largely in part due to Kane, have regularly challenged for the biggest trophies and made the Champions League final three years ago.

Kane started this match only two away from equalling Greaves’ club record of 266 goals and had his first sight of goal in the 14th minute but saw a scuffed effort at the back post blocked by Denver Hume.

Portsmouth, who sacked Danny Cowley on Monday after a nine-match winless league run, started brightly in the capital backed by a large away following, with Reeco Hackett-Fairchild testing Fraser Forster with an acrobatic effort early on.

The travelling support were olaying every pass by the half-hour mark with Tottenham struggling to break down the back five of the away side.

Conte’s men improved towards the end of the first 45 but Davinson Sanchez headed over before full debutant Pape Sarr and Son Heung-min sent speculative efforts well wide to ensure it was 0-0 at the break.

Spurs were able to maintain their momentum after the interval with Emerson Royal heading against the inside of a post from a tight angle following excellent wing play by Son.

It meant Josh Griffiths in the Portsmouth goal had still not been tested, but with 50 minutes on the clock he was picking the ball out of his net and predictably after another Kane goal.

Kane, fresh from a midweek brace at Crystal Palace, exchanged passes with Ryan Sessegnon on the edge of the area before he opened his body and curled the ball into the corner.

It put the stand-in Tottenham captain one away from Greaves’ record, but regular partner in crime Son was in the thick of the action immediately afterwards with one blazed effort followed up by a free-kick being fired over the crossbar.

Another Spurs academy graduate should have put the match to bed with 22 minutes left but Oliver Skipp, a late call-up after Yves Bissouma was injured in the warm-up, smashed over after fine work by Bryan Gil.

Pompey remained in the tie and Sanchez had to block an Owen Dale effort in the 70th minute with the visiting support louder than ever despite the wet weather in London.

There would be no late drama though, with Tottenham comfortably holding on and Conte able to introduce Djed Spence and Alfie Devine late on for some rare minutes.