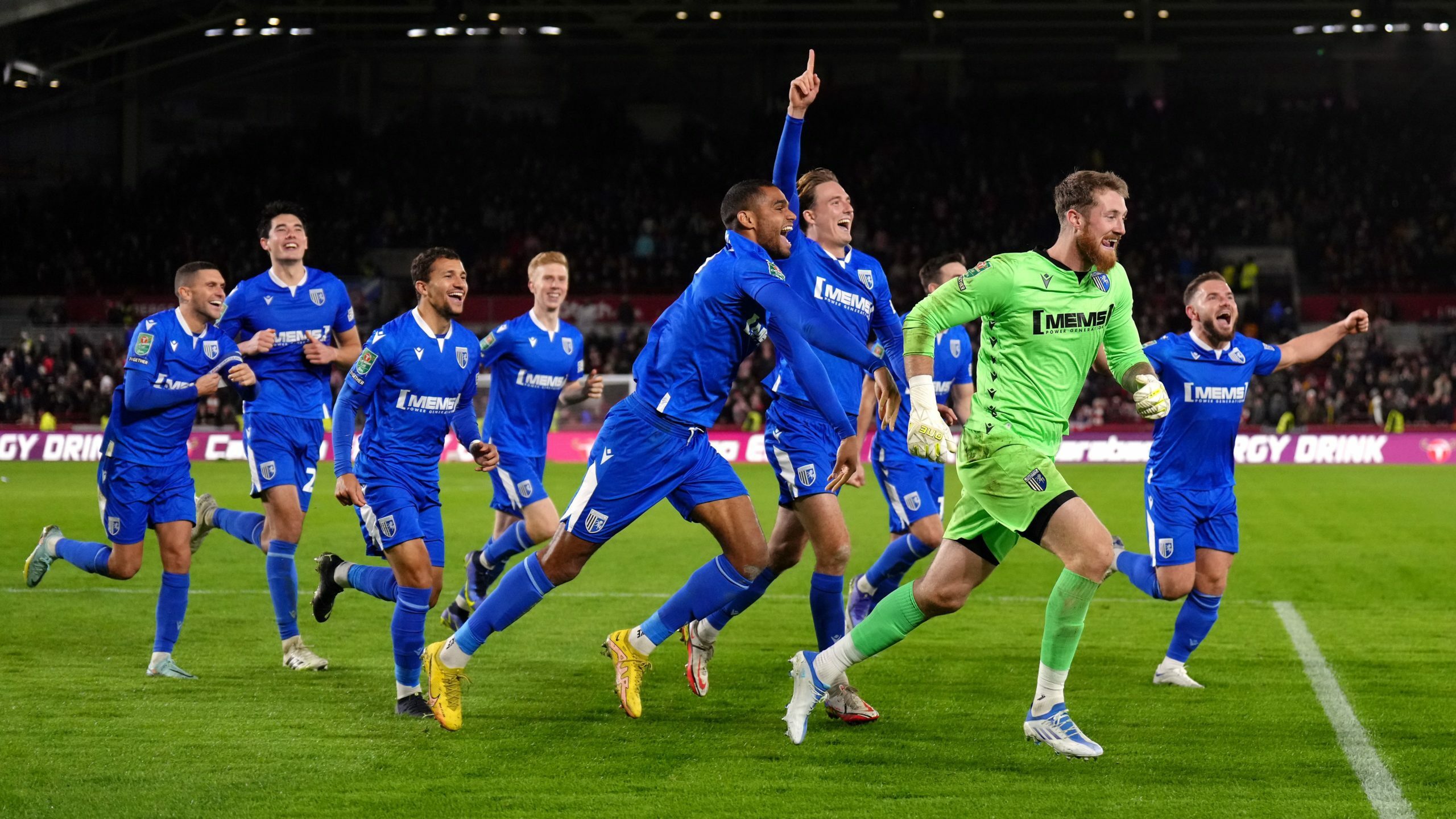 Neil Harris revealed Gillingham had to walk the last part of their journey to Brentford before running away with a place in the fourth round of the Carabao Cup.

The League Two Gills stunned their top-flight hosts with a 6-5 win on penalties after battling to a 1-1 draw.

Ivan Toney’s early goal put the Bees ahead but Gillingham hit back through a 73rd-minute header from substitute Mikael Mandron.

And after 11 successful spot-kicks Brentford midfielder Mikkel Damsgaard crashed his penalty against the crossbar to send the underdogs through.

It made it all the more memorable a day for the Kent club given the circumstances surrounding their arrival, which meant kick-off was delayed by 20 minutes.

“We had to walk here, we had to climb over barriers and help each other get over fences,” said Gills boss Harris.

“We got to about a quarter of a mile from Chiswick Roundabout and we got stuck. Fortunately we had a tactics board on the bus.

“But we couldn’t move and they couldn’t get a police escort to us. So we got in touch with the officials and decided to walk – probably about a 10-minute walk.

“And we had to leave two hours early this morning because of protestors. It’s been a bit of a carnage day.

Brentford boss Thomas Frank picked a strong team including England World Cup hopeful Toney, who did at least have the chance to showcase his nerveless penalty technique in the shoot-out one last time before Gareth Southgate names his squad.

“First of all congratulations to Gillingham, it’s well done by them,” said Frank.

“I don’t think you could doubt that I wanted to win with the team I put out. But Gillingham did their job very well, they took their chance and they were spotless in the penalty shoot-out.

“It is very frustrating. We wanted to go far in the competition. But this is cup football and why we love cup football. That’s why there are so many stories in the cup. That’s the ‘beauty’ of it, and I hope Gillingham enjoy it.”

Asked if he had spoken to Damsgaard, Frank added: “I gave him a hug, that’s it. He will feel down, but he will learn from this. “