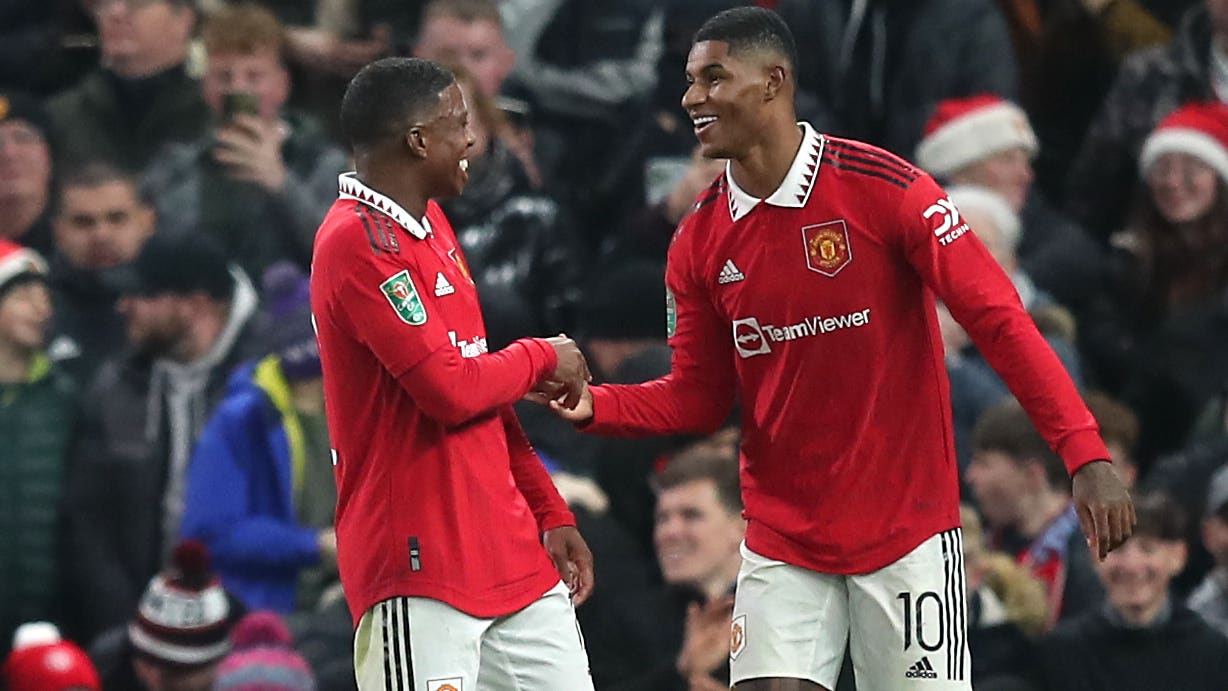 Marcus Rashford scored a superb solo effort as Manchester United moved into the Carabao Cup quarter-finals with a 2-0 victory over Burnley at Old Trafford.

Returning to action after the World Cup – and for their first match since Cristiano Ronaldo’s departure – Erik ten Hag’s men took the lead in the 27th minute through a close-range finish from Christian Eriksen, one of the various players on show that had been at the tournament in Qatar.

The advantage was then doubled by another 12 minutes into the second half when Rashford, scorer of three goals for England during the World Cup, went on a run taking the ball from his own half to the visitors’ box and drilled it into the net.

Vincent Kompany’s Championship table-topping Burnley threatened a number of times in attack – and almost benefited from some errors by United goalkeeper Martin Dubravka – but could not spring an upset.

Aside from the obvious absence of Ronaldo, following his exit by mutual agreement last month in the wake of his explosive TalkTV interview, other players who had been at the World Cup missing from United’s squad included finalists Lisandro Martinez and Raphael Varane, and fellow centre-back Harry Maguire, who was ill.

But there were five back from Qatar – Rashford, Bruno Fernandes, Eriksen, Casemiro, being utilised as a central defender, and Tyrell Malacia – included in a strong starting XI as Ten Hag made four changes from the 2-1 Premier League win at Fulham on November 13. Also, Luke Shaw, Antony and Fred were among the substitutes, and all got on in the second half.

Former Manchester City captain Kompany named a side showing two adjustments from their 3-1 win over Middlesbrough on Saturday, with long-serving forward Ashley Barnes one of those coming in.

As well as being post-Ronaldo, this was also a first competitive outing for United since the news their owners the Glazers were open to relinquishing control of the club, with a sale among the considerations in a “process to explore strategic alternatives”.

Some anti-Glazer chants could be heard from the stands in the opening stages of the game, while on the pitch, Barnes sent an early header wide, with the flag raised for offside, and Alejandro Garnacho, fed by Fernandes, hit a shot that was blocked by Bailey Peacock-Farrell’s boot.

United then grabbed the lead when Aaron Wan-Bissaka, making his first start of the season, stretched on the right to connect with Fernandes’ delivery and the resulting cross was met by Eriksen, who fired in.

Anthony Martial saw an effort caught by Peacock-Farrrell, before Manuel Benson struck into the United side-netting and brought a good save from Dubravka.

Moments later, Dubravka survived two scares in quick succession, firstly seeing Casemiro clear a goal-bound ball after the goalkeeper had misjudged an attempted punch, then hacking the ball away himself having miscontrolled a backpass.

Peacock-Farrell then made another stop in the 40th minute, keeping out Martial’s deflected strike.

Scott McTominay sent an attempt off-target shortly after the break, before inadvertently giving the ball to Benson, who skewed wide.

Rashford then produced a moment in keeping with his fine World Cup form, bursting forward with the ball from United’s half, advancing between two defenders as he got to the Burnley area and cracking a low shot beyond Peacock-Farrell.

Burnley made a decent push to hit back, with substitute Darko Churlinov shooting wide and Barnes over, both from good positions, and the latter then sending another effort wide in the final 10 minutes.

Antony saw a drive saved by Peacock-Farrell at the other end before the final whistle confirmed United’s place in the last eight.