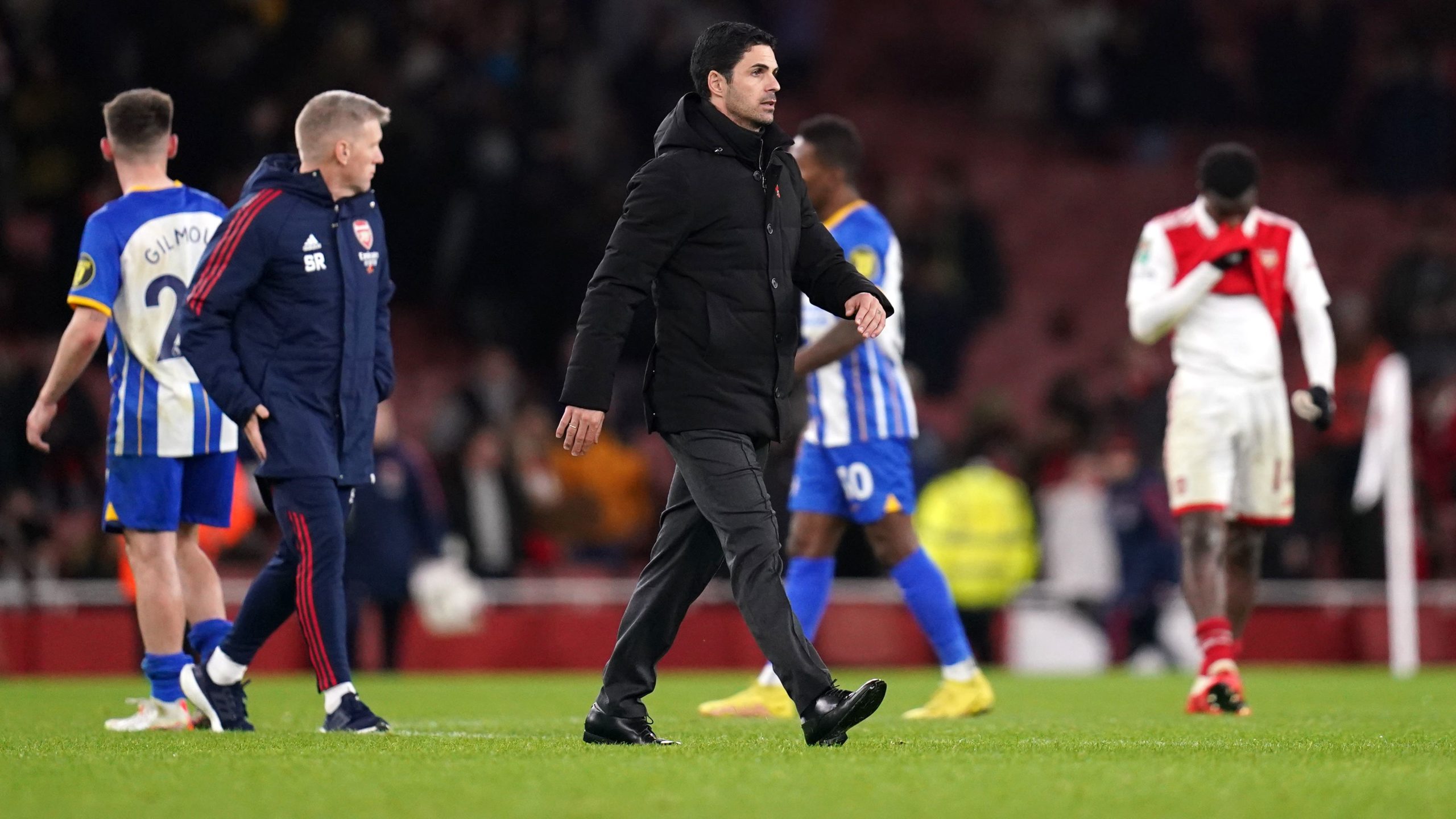 Mikel Arteta admits Arsenal could add to their “short squad” in the January transfer window after his much-changed side slumped to Carabao Cup defeat to Brighton.

The Gunners showed 10 changes from their weekend win at Chelsea which took them back to the top of the Premier League as Brighton left the Emirates Stadium with a 3-1 win.

Eddie Nketiah opened the scoring for the hosts with his 11th goal in 12 Carabao Cup outings, but Brighton stormed back.

Danny Welbeck levelled from the penalty spot after the former Arsenal man had been fouled by Gunners debutant Karl Hein, the Estonia goalkeeper slipping over before jumping back to his feet just in time to trip Welbeck.

Kaoru Mitoma and Tariq Lamptey scored on the break to send Brighton through as Arteta’s call for the cavalry – Gabriel Jesus, Gabriel Martinelli, Gabriel Magalhaes, Granit Xhaka and Oleksandr Zinchenko all coming off the bench – failed to rouse a response.

With Arsenal top of the league and progressing as winners of the Europa League group, Arteta believes reinforcements may be required in the window to consolidate their strong position.

“That’s the squad that we have,” he replied when asked if the result showed the need to spend in the transfer market.

“We have to utilise in the best possible way and today we came short, especially because we didn’t do what we have to do in both boxes to win a football match. We paid that price.

“It’s the same squad as when we win. I said from day one that we have a short squad because at the end we left some players. It’s what we have.

“If everyone’s available and no one is injured we are okay, but the moment there is, we know what it is. It’s nothing new. I think I said it the first day after the transfer window.”

Pushed on whether January could change things, Arteta added: “That’s a window that is open and we’ll have to discuss the opportunities that we have, the capacity that we have for any changes and be on the market for opportunities because we don’t know what’s going to happen the last game before the World Cup.

“So it’s a lot of options that are open.”

Brighton themselves showed eight alterations from their win at Wolves on Saturday but manager Roberto De Zerbi was pleased with what he saw.

“We can play better,” he said.

“We made mistakes but anyway I’m happy for this win, since we were a bit lucky in the first part of the second half.