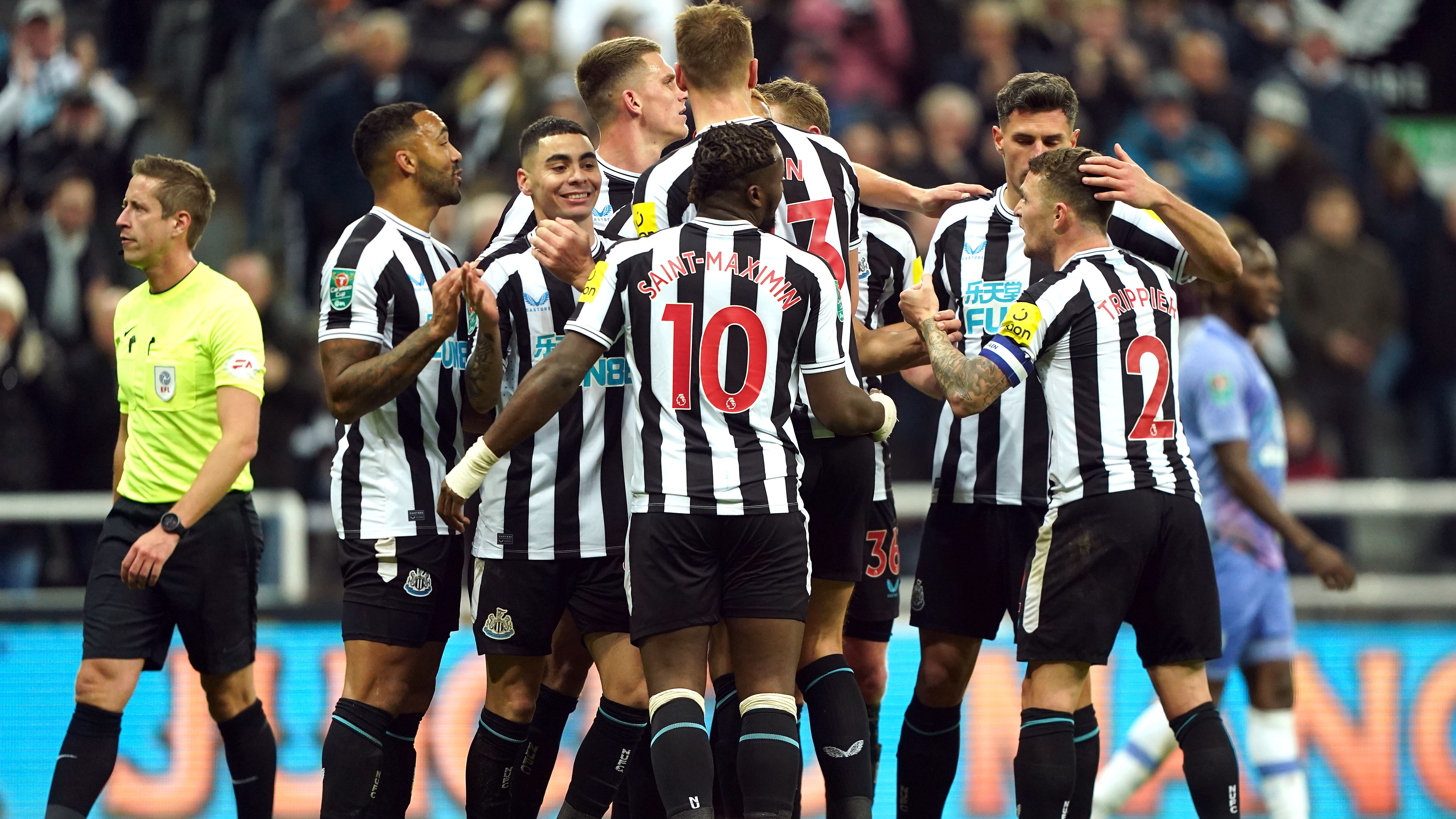 Newcastle into Carabao Cup quarter-finals with win over Bournemouth

By By Damian Spellman PADecember 20, 2022No Comments

Adam Smith’s own goal handed Newcastle a place in the Carabao Cup quarter-finals as Eddie Howe’s men edged past his former club Bournemouth.

The Cherries skipper’s 67th-minute misfortune was enough to secure a 1-0 victory for the Magpies at St James’ Park and increase hope that they can finally end a domestic trophy drought dating back to 1955.

If the win was deserved – the Magpies dominated much of the 90 minutes in front of an expectant crowd of 51,579 – it proved hard-fought with keeper Nick Pope having to save from substitute Jack Stacey and Dominic Solanke to preserve his clean sheet and ensure a seventh successive win.

Howe made a significant statement when he named all five of his returning World Cup stars – Pope, Kieran Trippier, Fabian Schar, Bruno Guimaraes and Callum Wilson – in his starting line-up.

Pope had to be alert to collect Kieffer Moore’s knock-down ahead of Ryan Christie as the visitors responded, but opposite number Mark Travers was relieved to see Schar’s 20th-minute piledriver fly just wide of his right post with no chance of getting to it.

Howe and assistant Jason Tindall were camped in the technical area repeatedly encouraging their side to move the ball quicker with Bournemouth sitting deep, and they thought they had gone ahead with 26 minutes gone when Wilson poked a shot past Travers, only to be greeted by a delayed offside flag.

The England frontman headed a driven Trippier cross over and then cleared the crossbar with a well-struck 35th-minute volley with Newcastle redoubling their efforts, but Travers comfortably fielded Guimaraes’ effort from distance six minutes before the break.

Miguel Almiron should have opened the scoring on the stroke of half-time, but he miskicked as he met Dan Burn’s cross beyond the far post, and the home side were grateful that a slick stoppage-time link-up between Jaidon Anthony, Jordan Zemura and Solanke ultimately came to nothing.

The Magpies lacked the required precision in the early stages of the second half with Schar failing to connect with an inviting Trippier free-kick in front of goal, and they were handed a 57th-minute warning when Moore sent a diving header wide from Smith’s cross.

With Anthony and Zemura increasingly influential as Bournemouth put together a series of counter-attacks, the game opened up, but the visitors contributed to their own downfall as the deadlock was finally broken.

Smith battled manfully in the air in an attempt to prevent Wilson from reaching Trippier’s cross, but succeeded only in heading the ball into his own net despite the best efforts of team-mate Marcos Senesi on the line.

Stacey tested Pope with a firmly-hit shot 16 minutes from time and Travers had to claw away Guimaraes’ deflected shot, but Solanke was denied by the England keeper at the death.