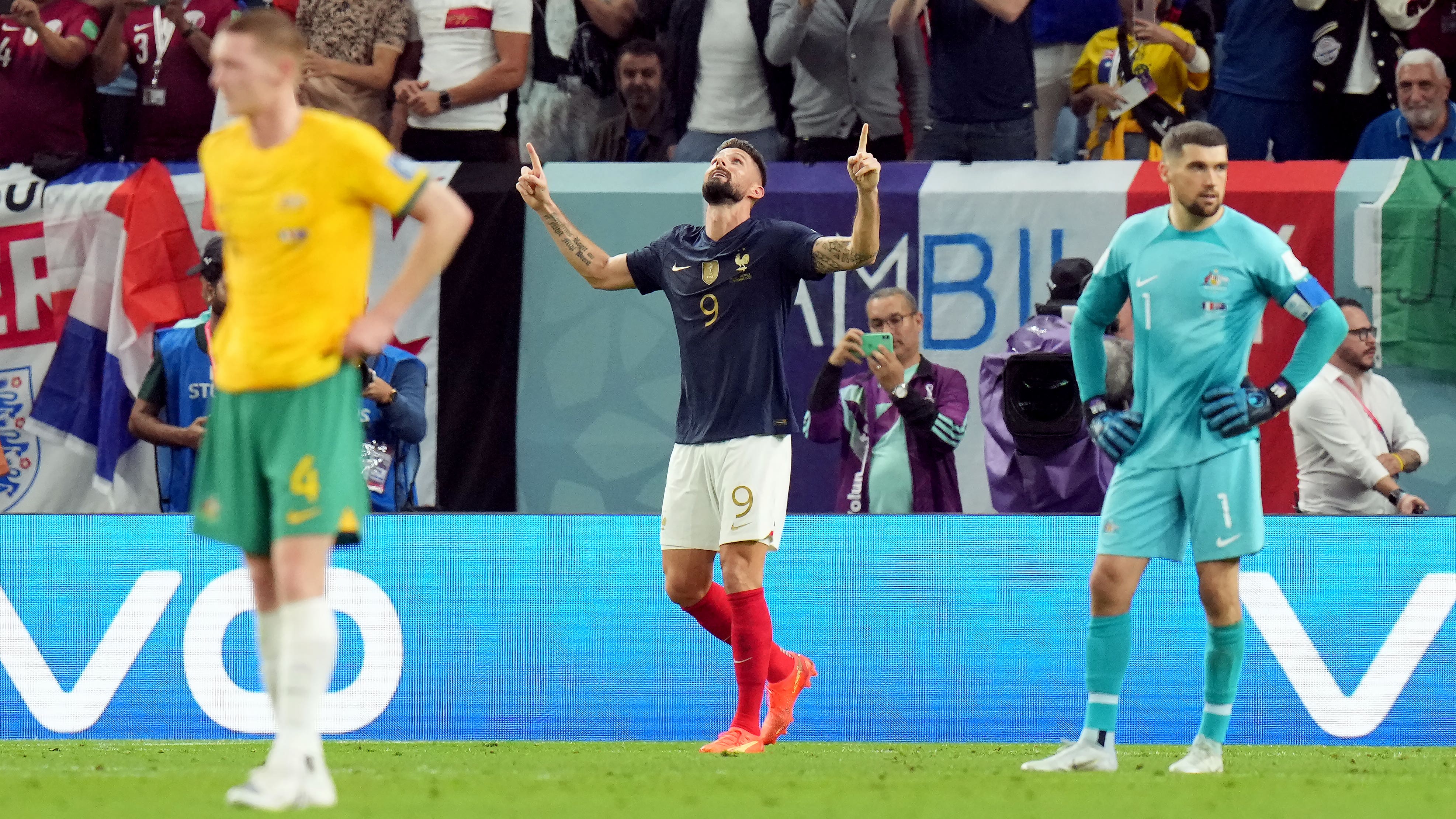 By Press AssociationNovember 22, 2022No Comments

Olivier Giroud equalled France’s all-time goalscoring record as his brace helped the holders recover from an early scare to make light work of Australia and begin their World Cup defence with a comfortable victory.

A number of injures rocked the France squad heading into the finals and they were stunned as Craig Goodwin opened the scoring on nine minutes before rallying to record a 4-1 win.

Even with Karim Benzema, N’Golo Kante, Presnel Kimpembe, Christopher Nkunku and Paul Pogba all missing the finals through injury and Raphael Varane only fit enough for the bench, Les Bleus showed their tournament credentials.

Argentina had slipped up earlier in the day by losing to Saudi Arabia in one of the biggest World Cup shocks of all time and France boss Didier Deschamps will be happy his side did not go the same way after Australia took a shock lead.

Goodwin arrived at the back post to convert from a low Mathew Leckie cross, with Lucas Hernandez adding another name to France’s injury list as he limped off to be replaced by younger brother Theo after seemingly twisting a knee in the build-up.

Mitch Duke almost stunned France with a brilliant second, collecting the ball following a loose back-pass from Theo Hernandez and firing inches over from outside the box.

The holders would level shortly afterwards, Rabiot’s powerful header from Theo Hernandez’s cross too strong for Mat Ryan to keep out.

Rabiot was involved in the goal that put France ahead just five minutes later, Nathaniel Atkinson caught in possession trying to play out with Mbappe playing in Rabiot, whose cross was turned home by Giroud.

The AC Milan striker will be relieved to get off the mark in the opening game having gone through the whole tournament four years ago without scoring.

Mbappe somehow managed to put an effort over the crossbar as he slid in from close range and the Socceroos almost levelled immediately afterwards as Jackson Irvine headed against the post.

Giroud sent an acrobatic volley wide, Mbappe was prevented from getting a clear shot at goal due to a Kyle Rowles challenge and Griezmann saw an effort cleared off the line as France dominated after the break.

The Australian resistance ended on 68 minutes, however, Mbappe getting off the mark with a fine header from Ousmane Dembele’s cross.

Giroud, 36, would go on to match Henry’s total, this time Mbappe putting in the cross which the former Arsenal and Chelsea striker nodded home before being replaced late on as France cruised over the line.