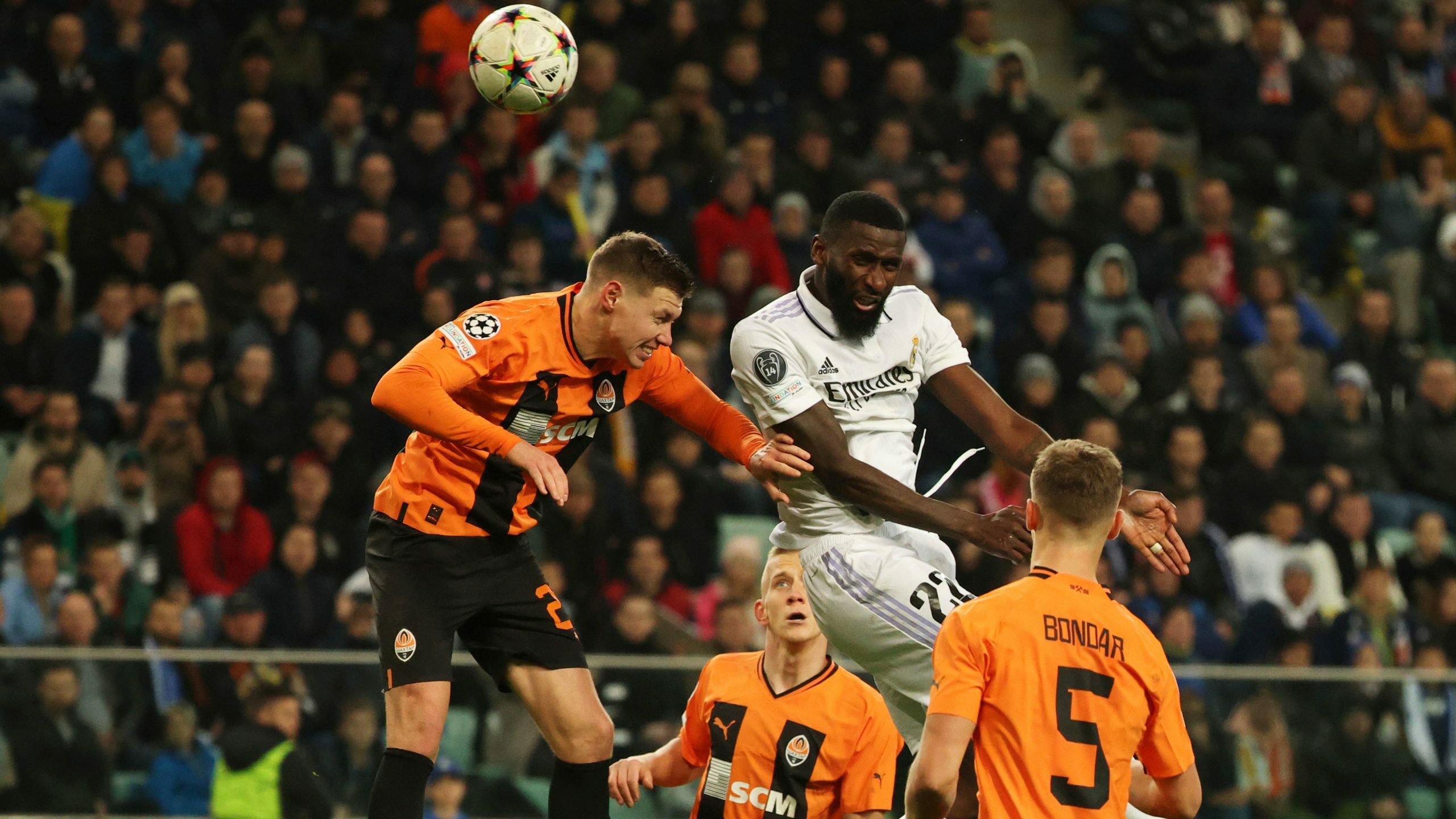 Shakhtar Donetsk were denied a memorable win over Real Madrid as Antonio Rudiger scored a stoppage-time equaliser in their Champions League Group F match in Warsaw.

Oleksandr Zubkov headed the Ukrainians, beaten 2-1 by Real in Spain last week, in front at the start of the second half.

That had looked to be enough for a hard-earned victory, but former Chelsea defender Rudiger headed in a dramatic equaliser in the fifth minute of added time.

Real Madrid sit top of the table, now four points ahead of RB Leipzig, who won 2-0 at Celtic.

The Bhoys went close in the first half when Matt O’Riley and Reo Hatate were both denied by the woodwork in the same attack before Kyogo Furuhashi headed over.

Celtic goalkeeper Joe Hart had saved from Christopher Nkunku then Willi Orban early in the second half, but former Chelsea forward Timo Werner eventually headed Leipzig in front with 15 minutes left and substitute Emil Forsberg wrapped things up late on to leave the Scottish side bottom and unable to progress.

Chelsea are top of Group E after a 2-0 win at AC Milan, who played most of the match with 10 men.

The English side took an early lead from the penalty spot with Jorginho converting after former Blues defender Fikayo Tomori was shown a red card for pulling back Mason Mount.

Pierre-Emerick Aubameyang doubled the lead in the 33rd minute after being played in by Mount, and substitute Conor Gallagher fired wide during the second half.

Dinamo Zagreb and RB Salzburg drew 1-1 at the Maksimir Stadium.

Manchester City had a goal ruled out, failed to convert a penalty and then had defender Sergio Gomez sent off in an eventful first half of a goalless draw away to Copenhagen, which was still enough to see them into the last 16 from Group G.

Rodri’s superb 22-yard early strike was ruled out by VAR for an unintentional handball from Riyad Mahrez, who saw his 25th minute spot-kick saved.

City were reduced to 10 men after half-an-hour when left-back Gomez was shown a straight red card for pulling back Hakon Haraldsson following another VAR intervention.

The tempo of the match dropped in the second half, with Joao Cancelo eventually testing Copenhagen keeper Kamil Grabara from distance late on – but it finished 0-0.

Borussia Dortmund fought back to draw 1-1 against Sevilla at Signal Iduna Park.

Tanguy Nianzou headed Sevilla in front following a free-kick on 18 minutes, but England midfielder Jude Bellingham bundled in an equaliser before the break.

Dortmund sit second in the table, five points ahead of Sevilla and Copenhagen.

Paris St Germain and Benfica remain locked together at the top of Group H following a 1-1 draw in the French capital.

Kylian Mbappe converted a penalty late in the first half to give PSG – without Lionel Messi because of injury – the lead, but Joao Mario equalised from the spot just after the hour.

Juventus crashed to their third group defeat as they lost 2-0 away to Maccabi Haifa, who secured their first win.

Omer Atzili headed Haifa into an early lead and doubled the lead shortly before the break as Juve were dealt another setback following Saturday’s Serie A defeat to AC Milan.