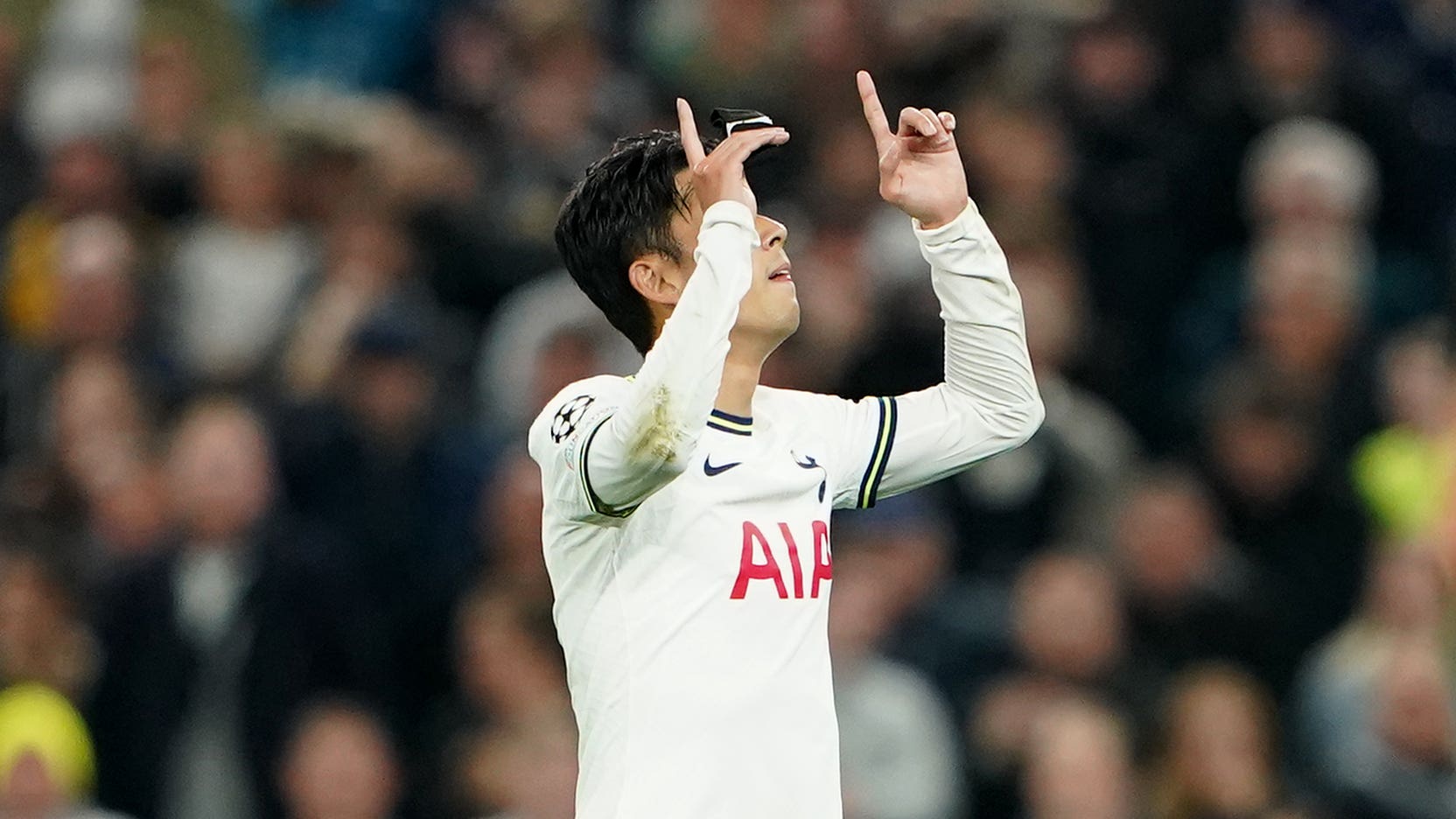 Spurs were left stunned when the visitors took a 14th-minute lead through Daichi Kamada but Son’s first-half brace – sandwiched between a Kane spot-kick – ensured Antonio Conte watched his team fight back to taste success for a sixth consecutive time in N17 this season despite Faride Alidou’s late header.

Kane did blaze a second penalty over in stoppage-time and Frankfurt ended with 10-men after Tuta’s red card but Tottenham’s win sent them to the Group D summit and victory over previous leaders Sporting Lisbon in two weeks will put Conte’s men through to the knock-out stage.

This was Spurs’ first home game in almost a month and after an emotional win at Brighton, further tributes were paid to late fitness coach Gian Piero Ventrone, who died last week.

A minute’s applause took place for the Italian and ex-Tottenham forward John Duncan, after his death on Saturday, before an uneventful opening to this crucial Group D tie.

That changed after quarter of an hour when the visitors took the lead to spark a frantic 15-minute period where three goals were scored.

A catalogue of errors saw Frankfurt break the deadlock when Eric Dier’s heavy touch in the area was punished with Jesper Lindstrom robbing the defender and, while his cross to Randal Kolo Muani was intercepted by Hugo Lloris, away captain Sebastian Rode had the presence of mind to set up Kamada for a simple tap-in.

Kamada had netted in the German club’s last two visits to London – wins at Arsenal and West Ham – but his 14th-minute opener was quickly wiped out.

It was the same combination that downed Brighton at the weekend only this time Kane turned creator in chief with a perfect through ball for Son, who slotted home to level after 20 minutes.

Son took off his black armband and pointed to the sky in memory of Ventrone, but moments later wanted a penalty after a coming together with goalscorer Kamada.

Referee Carlos Del Cerro Grande waved away those appeals and did the same when Kane went down with 25 minutes on the clock but VAR had other ideas this time.

The Spanish official was told to have another look at Kane’s bulldozing run which saw him beat Djibril Sow and then Kristijan Jakic, who shoved the forward to the ground.

Del Cerro Grande decided on second view a spot-kick was justified and Kane made no mistake from 12-yards to end his lengthy wait for another Champions League goal – netting for the first time in the competition since November 2019.

Tottenham’s stadium was rocking now although Lloris had to be alert to deny Lindstrom’s snapshot and that proved crucial with a third following for the hosts minutes later.

Pierre-Emile Hojbjerg was the architect with an excellent run into the area and his chipped cross was emphatically volleyed home by Son to make it 3-1 in the 36th minute.

Kevin Trapp’s boot thwarted Son’s bid for a first-half hat-trick and the Germany goalkeeper impressively tipped wide Cristian Romero’s stoppage-time header but more misery was around the corner for Frankfurt.

Centre-back Tuta received his marching orders on the hour mark for fouling Son for the second time in three minutes with both offences earning him a caution and a subsequent red card.

Frankfurt were perhaps fortune Makoto Hasebe did not follow suit when he hauled down Kane twice in quick succession and also Son for good measure but referee Del Cerro Grande kept his card in his pocket on this occasion.

Kane stayed down after both challenges and yet it was Richarlison who made way when Conte introduced Yves Bissouma and Oliver Skipp with 23 minutes left.

Despite their numerical disadvantage, Frankfurt reduced the deficit with three minutes left when Alidou headed home Lindstrom’s corner but more drama was to follow.

Substitute Bryan Gil won a stoppage-time penalty after being brought down by Hrvoje Smolcic.

There would be no icing on the cake for the hosts after Kane smashed over the crossbar from 12-yards to ensure a nervy final few minutes followed before Spurs sealed the points.