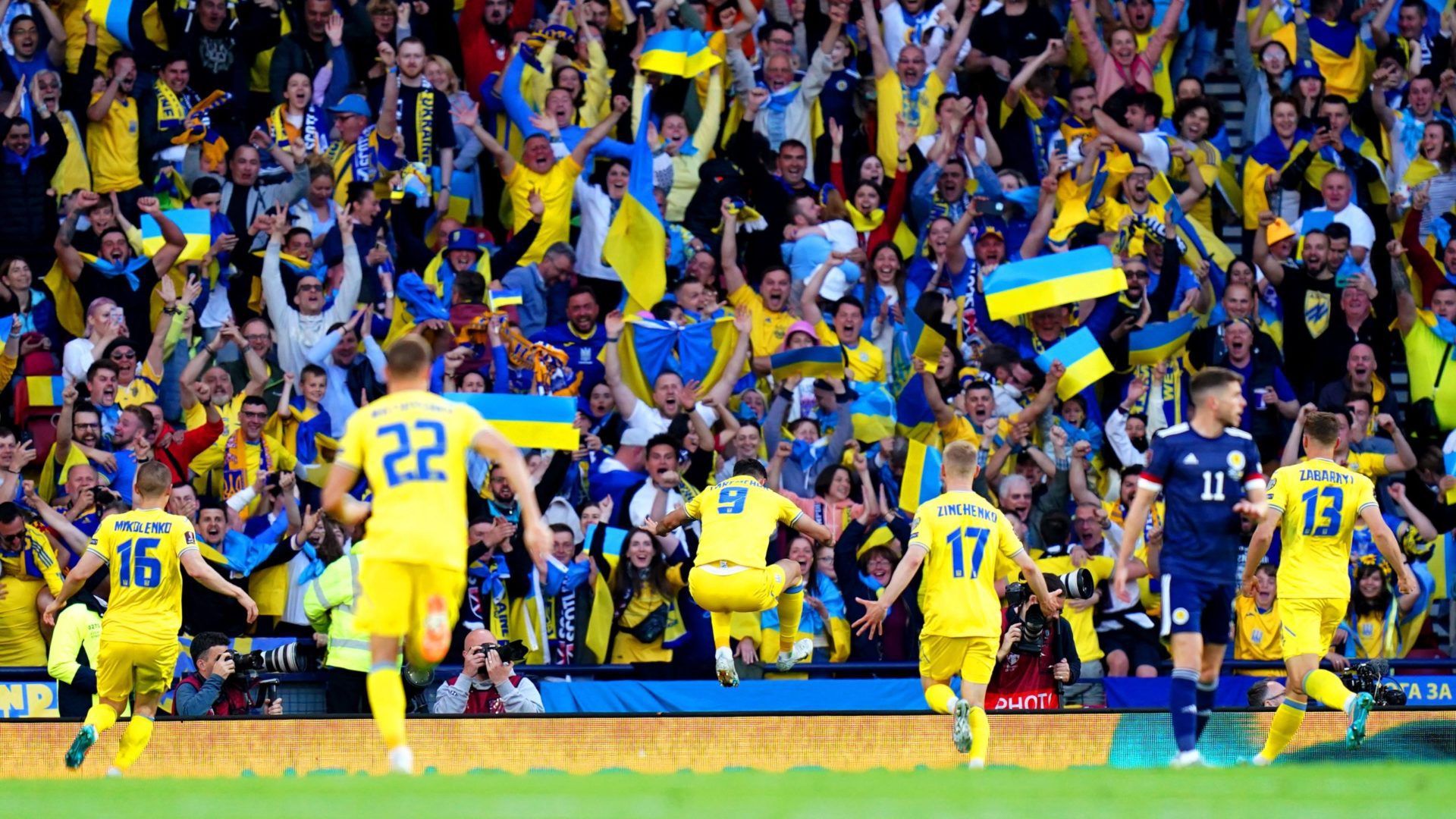 By By Ronnie Esplin PAJune 1, 2022No Comments

Scotland’s 2022 World Cup hopes ended in devastating fashion after a 3-1 defeat by Ukraine in their play-off semi-final at an emotionally-charged Hampden Park.

Worldwide attention was on the game due to Russia’s invasion of their neighbours in February but when the focus turned to football it was Ukraine who were the more accomplished.

Scotland’s 39-year-old keeper Craig Gordon kept the visitors at bay only until the 33rd minute when skipper Andriy Yarmolenko deservedly put the visitors ahead and Roman Yaremchuk doubled that lead with a header three minutes after the break.

Midfielder Callum McGregor pulled a goal back in the 79th minute as Steve Clarke’s men rallied but it was too little too late and Ukraine substitute Artem Dovbyk drove in a breakaway third in added time to book a place against Wales in the play-off final in Cardiff on Sunday.

After their first defeat in nine games, Clarke’s squad now has to regroup and somehow get ready for the Nations League opener against Armenia at Hampden Park next week.

The night had promised Scotland so much. Clarke gave 19-year-old Bologna defender Aaron Hickey his first competitive start at right wing-back with Liam Cooper beside Scott McTominay and Grant Hanley in a back three and Che Adams and Lyndon Dykes the main strikers.

Ukraine, backed by around 3,500 fans, started with six players who have not played a competitive game in 2022.

The visitors’ domestic league halted for a winter break in December and never resumed after Russia’s invasion.

Ukraine’s national anthem was roundly applauded by the Tartan Army who then belted out Flower of Scotland before the long-awaited game got going, if rather nervously.

Veteran Gordon had to be at his best. The Hearts keeper, who had played in the 2007 win over Ukraine, had to tip over Viktor Tsygankov’s first-time drive from 16 yards, with the corner coming to nothing.

Gordon’s save on 17 minutes from Yarmolenko was better, terrific in fact, grabbing the ball at the second attempt a yard from the line after blocking the attacker’s first attempt from point blank range.

Moments later, Gordon thwarted Yaremchuk after the home defence had been opened up again.

However, the Scotland keeper was eventually beaten, and rather simply, when Ruslan Malinovskyi’s long pass from defence found Yarmolenko who expertly lobbed Gordon from the edge of the box.

The home fans vented their displeasure at half-time and it was clear that Clarke had work to do and plenty of it.

Ryan Christie replaced Dykes for the start of the second half but it soon got worse for the Scots when Yaremchuk rose highest six yards out to head a cross from Oleksandr Karavaev back across Gordon and into the net.

Scottish boos again rang around the stadium as the Ukraine players celebrated with their supporters.

The home side were staggering and Gordon had to save a drive from Yarmolenko.

In the 56th minute Ukraine keeper Georgiy Bushchan’s all too casual clearance was charged down by McGregor but the ball flew over the bar.

Christie combined with Adams before his low drive was smothered by Bushchan and increasing frustration in the stands was exacerbated in the 66th minute when midfielder John McGinn missed a glorious chance when he headed past the post with the goal gaping after Bushchan had flapped at a McTominay cross.

Gordon was called into action again in the 70th minute following a swift Ukraine counter, the Tynecastle keeper having to parry Tsygankov’s drive away before it was cleared to safety.

Adams and McGinn had efforts blocked as the pressure increased before McGregor brought Hampden to life again when his shot from 16 yards in a packed penalty area was palmed into the net by Bushchan, despite the efforts of defender Taras Stepanenko to clear.

Seconds later the Celtic captain chased back to stop Dovbyk getting a shot away and the tension increased further.

Scotland piled forward in the closing minutes but Ukraine took advantage with Dovbyk scoring a third on the break take a step closer to Qatar, leaving Hampden Park stunned.