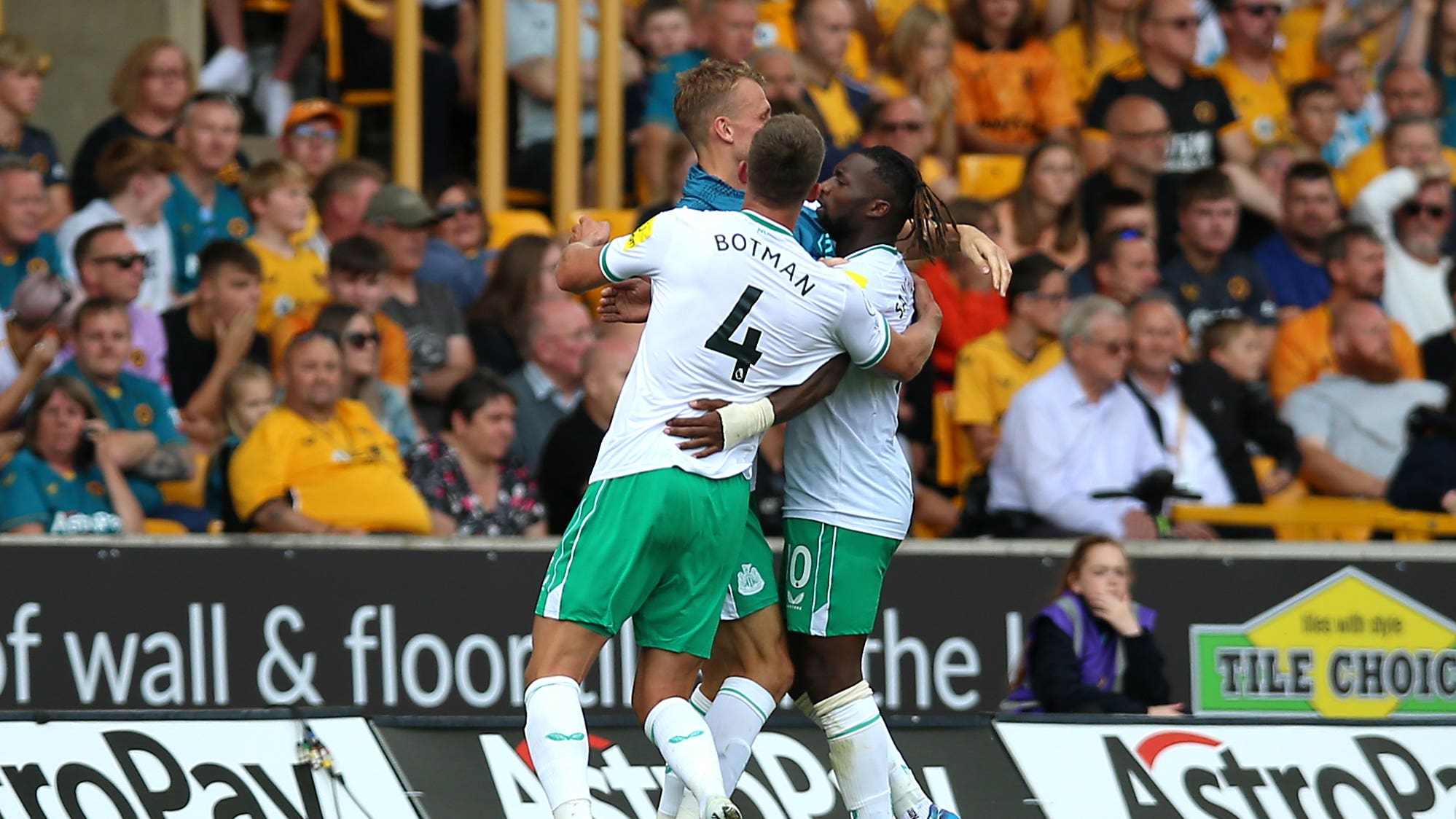 The forward struck in the final minute to snatch a 1-1 draw just as the Magpies looked to be slipping to their first defeat of the season.

Ruben Neves’ screamer had given Wolves the lead but the hosts had to hold on with Elliot Anderson hitting the bar in stoppage time.

Newcastle needed Saint-Maximin to produce as Eddie Howe was unable to call on new £60million signing Alexander Isak with the Sweden international yet to receive his work permit.

With Bruno Guimaraes injured, along with Callum Wilson, the Magpies were robbed of their best creative outlets, Saint-Maximin aside.

The point does little to raise hopes at Molineux with Wolves still looking for their first Premier League win of the season.

Newcastle were the first to threaten when Jose Sa thwarted Chris Wood inside the opening five minutes after the striker seized on a loose ball and went to round the goalkeeper.

Yet, as much as Neves oozed quality in the middle, his team-mates were nervy at the back and indecision almost cost them after 12 minutes.

It fell to Joe Willock but with just Sa to beat the midfielder steered wide form six yards.

Newcastle could sense an opening and, even though there was much to admire about Wolves’ early build-up play, it was the Magpies who were more fluent.

Saint-Maximin was a menace while Longstaff protected the visitors and probed for openings.

But they almost gifted Wolves a goal after 29 minutes when
Trippier recklessly lost possession to Raul Jimenez.

The striker had time to pick out the onrushing and unmarked Nunes, only for the club-record signing to wastefully head wide.

It emboldened Wolves and they began to find some momentum, which was capped by a trademark Neves rocket seven minutes before the break.

The skipper started the move by finding Neto on the right who, in turn, spread the play to Guedes on the left. He played the ball inside to Neves and the midfielder unleashed a stunning low drive into Nick Pope’s bottom corner from 25 yards.

It knocked the stuffing out of Newcastle and, while Fabian Schar’s effort deflected wide after the break, the visitors lost their early impetus and looked devoid of ideas.

Pope saved from Neto as Wolves grew comfortable with their lead and defended resolutely.

The Magpies pressed but left themselves open to the break and Wolves thought they had doubled their lead with 10 minutes left only to see Jimenez’s goal disallowed.

Neto had given Ryan Fraser a shove in the build up, before breaking and finding Jimenez to tap in, and referee Peter Bankes rightly ruled it out, although only after checking the monitor.

Newcastle then took full advantage of the reprieve in the final minute.

Under pressure from Jacob Murphy, Hwang Hee-Chan sliced a clearance into the air and it dropped for Saint-Maximin to thump a brilliant volley into the corner from 20 yards.

There was still time for the Frenchman to test Sa as Newcastle suddenly went for a win and Anderson’s header hit the bar in injury time.