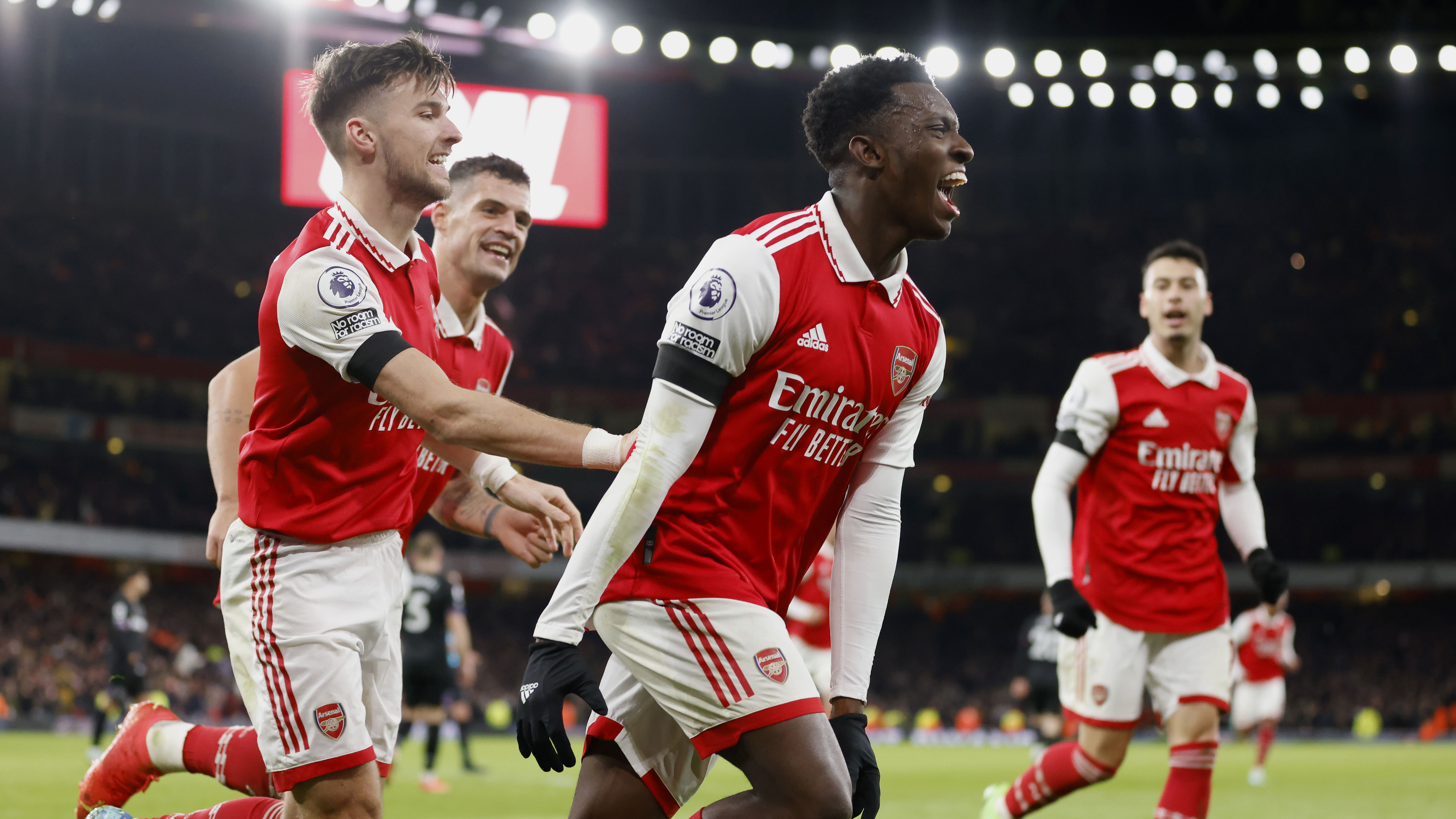 Eddie Nketiah scored on his first start for Arsenal this season as the Premier League leaders completed a 3-1 comeback win over West Ham.

The hosts dominated possession in the first half but were frustrated as Said Benrahma’s spot-kick was the only goal at the break.

But the Gunners regrouped and Bukayo Saka struck the equaliser eight minutes after the restart before Gabriel Martinelli fired Arsenal ahead.

Nketiah’s goal in the 69th minute ensured the Gunners secured all three points and equalled their longest-ever Premier League home winning streak with their 10th straight victory at the Emirates.

As predicted, Nketiah started in place of Gabriel Jesus, who is sidelined with the injury he sustained while playing for Brazil at the World Cup.

Arsenal thought they had gone ahead inside five minutes when Saka found the back of the net, but the ball had taken a touch off Nketiah in the build-up, resulting in an offside call.

Martinelli then went on a fine run down the left before he was brought down by Jarrod Bowen, who was immediately booked. The Gunners were awarded the eighth-minute free-kick but could not make anything of it.

Arsenal squandered a good opportunity to pull ahead when Martin Odegaard attempted to set up a one-on-one for Granit Xhaka but instead overpowered his pass and the Switzerland skipper could not get to the ball before West Ham keeper Lukasz Fabianski.

The Gunners, who dominated possession in the first period, continued to find themselves frustrated by the resilient visitors, who ultimately pulled ahead when William Saliba brought down Bowen just inside the area, clipping the West Ham forward’s left foot.

The referee pointed to the spot and Benrahma stepped up, firing into the back of the net as Aaron Ramsdale went to his left to open the scoring in the 27th minute.

The Gunners piled on the pressure with wave after wave of attack throughout the first 45 minutes, frequently finding themselves in the final third but ultimately producing nothing.

The first half ended in more frustration for the hosts when Odegaard fired a sharp left-footed strike that hit Aaron Cresswell, whose arm was raised as he made the block. Arsenal were initially awarded the handball, but a VAR check confirmed the ball had hit Cresswell’s head and ensured the Gunners went into the break 1-0 down.

Michail Antonio saw his attempt to double the Hammers’ lead shortly after the restart thwarted. Thomas Partey’s effort was then turned away at the right post and Fabianski blocked the resulting corner.

The Gunners equalised in the 53rd minute when Odegaard’s effort instead found its way to the feet of Saka at the edge of the six-yard box. Saka wasted no time, slotting into the bottom left corner to level the scores.

Arsenal took the lead just six minutes later after a few quick touches found Martinelli at the left of the area and he beat Fabianski with a low effort at his near post.

Nketiah had enjoyed the vocal support of the Emirates crowd from kick-off and they were finally rewarded when Odegaard tapped the ball to the 23-year-old, who neatly pivoted around his marker before firing into the bottom corner as the elated fans chanted his name.