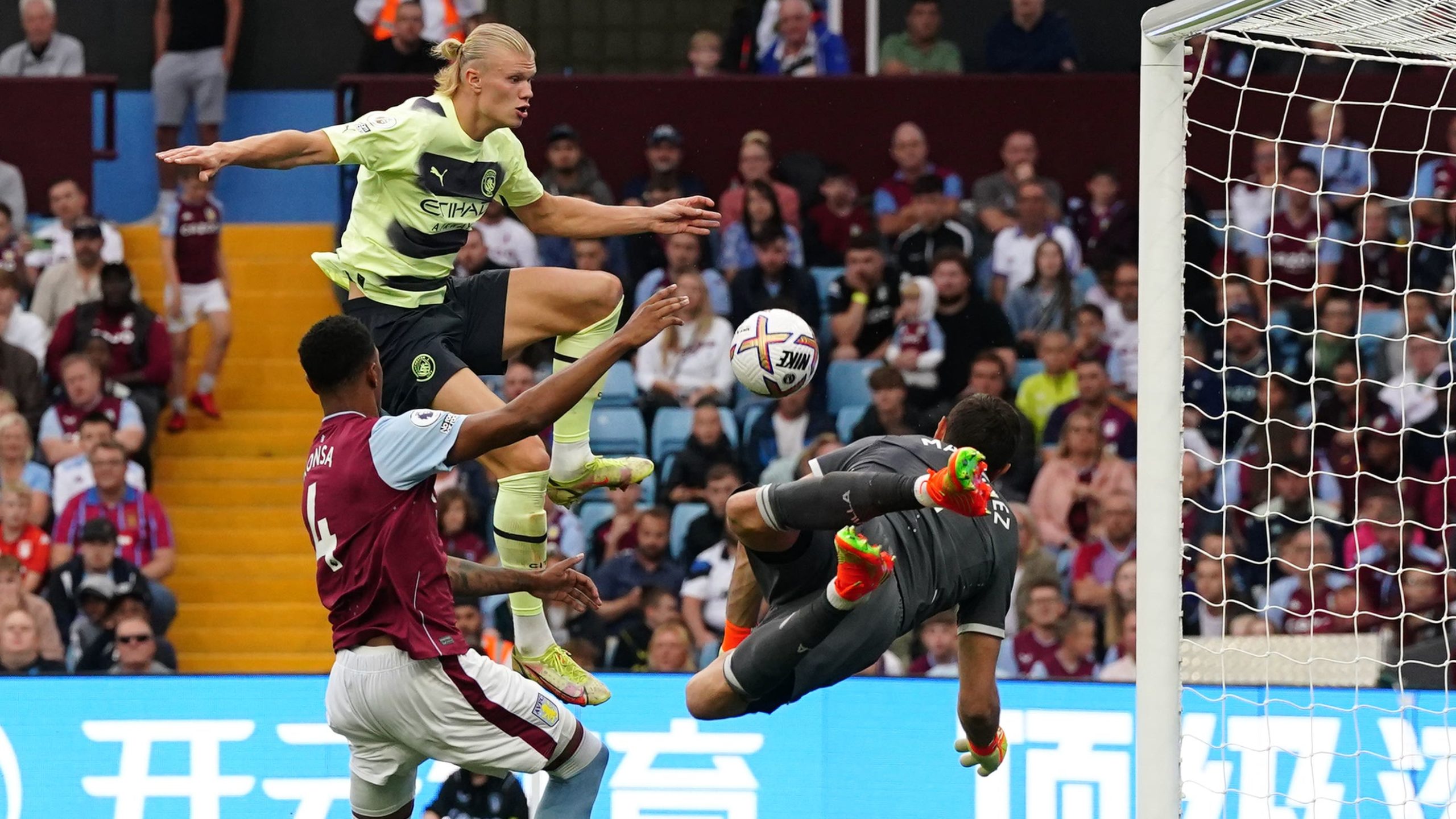 Erling Haaland became only the second player in Premier League history to reach 10 goals in their first six appearances but Manchester City failed to make their dominance count as Leon Bailey secured a much-needed draw for Aston Villa.

City’s 22-year-old striker has sparkled since swapping Borussia Dortmund for his father’s former club in the summer and followed back-to-back hat-tricks with another effort on Saturday evening.

Haaland nudged home Kevin De Bruyne’s inch-perfect cross early in the second half and the pair toyed with Villa at times, only for City to be caught cold by Bailey’s fizzing strike in a 1-1 draw.

It ended a three-match losing streak for under-pressure Steven Gerrard, whose side held firm in the first half only to concede five minutes after the restart at Villa Park.

Haaland ghosted in at the far post to turn in De Bruyne’s perfect cross and net his 10th goal in six games – a feat only Coventry’s Micky Quinn managed in Premier League history in 1992.

De Bruyne hit the crossbar with a free-kick and was showing incredible early understanding with Haaland, but Villa held tight and scored a well-taken equaliser.

Bailey unleashed a fierce strike from a Jacob Ramsey ball in front of the Holte End, who were celebrating again when substitute Philippe Coutinho’s strike went in off the underside of the bar.

Referee Simon Hooper had already blown his whistle for offside when the Brazilian struck, but replays showed he was in fact onside in the build-up.

That decision will be pored over following this draw and Guardiola is sure to be annoyed with his side’s profligacy in front of goal.

Kyle Walker had the first chance of the game. The right-back may have strayed offside in the build-up but that did not take the edge off of Haaland’s anger when he lashed off target rather than passing to him.

De Bruyne struck a 20-yard effort just wide and there was a collective sigh of relief when the brilliant Belgian’s inviting cross just evaded Ilkay Gundogan.

Villa were struggling to contain the visitors and were hit by an injury to right-back Matty Cash, who was replaced by Ashley Young in the 27th minute.

There was a huge roar when the veteran brilliantly tracked back to halt a De Bruyne-led counter before launching their own, leading Ollie Watkins to go through and get away a shot that John Stones deflected across the face of goal.

Villa grew in confidence as half-time approached, but would fall behind in the 50th minute.

De Bruyne clipped a superb cross from the right that crept agonisingly out of Emiliano Martinez’s reach and dropped perfectly for Haaland to nudge home at the far post.

City fans goaded Gerrard with chants of “you’re getting sacked in the morning” but a rare Rodri mistake soon had them panicking.

Ramsey had won the ball and collected a return pass from Ollie Watkins, only for Ederson to race out to deny him. Bailey fired wide from the edge of the box soon after.

City eventually regained control and Haaland swivelled to hit a strike that Martinez saved, with the striker then drawing a foul from Tyrone Mings that led De Bruyne to hit a 22-yard free-kick off the crossbar.

The Belgian teed up the Norwegian to get a shot away that Martinez parried, before the roles reversed and the midfielder struck wide with the outside of his boot.

It looked a matter of when rather than if City would score again, but they were made to pay for not turning those chances into goals in the 74th minute.

Ramsey drove forward then played over for Bailey to hit a sweet first-time strike with his left foot that flew past Ederson.

City attempted to take advantage of their let-off as they laid siege to the Villa goal.

Rodri sent a shot skipping wide from the edge of the box and Riyad Mahrez missed the target, unaware offside would end up being called. Guardiola’s men kept knocking but they could not eke out a winner.