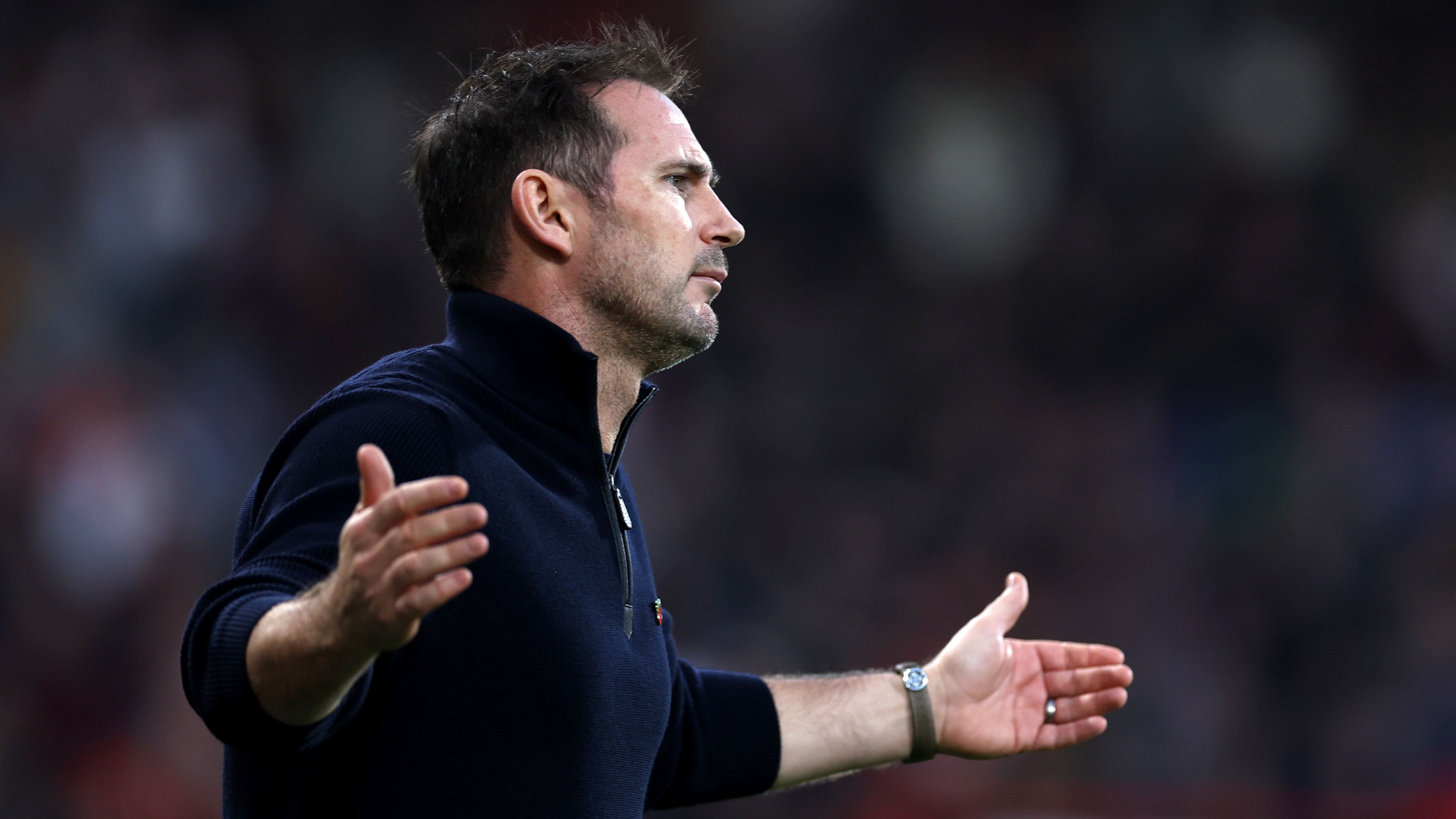 Frank Lampard has been sacked as Everton manager after just under a year in charge.

Lampard leaves Goodison Park with the club 19th in the Premier League and embroiled in a second successive relegation battle after a run of nine defeats in 12 games.

The PA news agency understands the Toffees parted company with Lampard on Monday but there has not yet been any official confirmation from the Merseyside outfit.

Former Chelsea and Derby boss Lampard was appointed last January as successor to Rafael Benitez, who had lasted just 200 days in the post. His departure means Everton are now looking for their eighth permanent manager since owner Farhad Moshiri took over the club in February 2016.

Moshiri offered public backing to Lampard as recently as January 13, but hugely damaging defeats to fellow strugglers Southampton and West Ham have forced a change.

The 44-year-old won just nine and lost 21 of his 38 Premier League matches and leaves eight days before the first anniversary of his appointment.

Everton scored just 34 goals during that period, and only 15 goals in 20 games this term. They have only managed to find the net more than once in a game twice this season.

With a first relegation since 1951 looming large, Lampard’s departure adds to the turmoil amid a period of fan unrest after numerous demonstrations against the club board in recent weeks.

The club’s delay in confirming the news, when it was being widely reported on Monday afternoon, is likely to add to supporter frustration.

However, while fans had largely backed Lampard, former Everton striker Kevin Campbell felt the club had no choice but to make the change.

He told Sky Sports News: “The inevitable has happened. It hasn’t gone according to plan and the club have pulled the trigger.

“I backed Frank Lampard but ultimately it’s about results and I think the club had to make the move.

“Sitting second bottom the club find themselves in a difficult situation. The club’s a bit toxic at the moment so they’ve got to do something to address the slide. They should not be second bottom or anywhere near the bottom.

“I’m looking forward to hearing from the board and the owner what’s to come. Those fans want a plan, they want commitment and they haven’t had it, and now another manager bites the dust. Here we go on the merry-go-round again.

“They are going to have to make a decision on the manager quickly because there’s not a lot of the window left. The manager’s got to come in and make decisions, if they’re allowed to. Everton’s squad is under-achieving.”

The club now have to move fast to find Lampard’s replacement with eight days remaining of the transfer window as events mirror those of 12 months ago.

Then Lampard was not appointed until deadline day – more than two weeks after Benitez’s departure – and was followed through the door with the last-minute arrivals of Dele Alli and Donny Van de Beek, on loan from Manchester United.

A loan deal for Villarreal winger Arnaut Danjuma has been agreed and is likely to be announced in the next 24 hours but further reinforcements are required to help steer the club away from safety.

Former Burnley manager Sean Dyche, himself sacked last April after a decade with the Clarets as he failed to keep them in the Premier League, is the bookmakers’ favourite.

The odds on former Everton striker Duncan Ferguson, who left the club’s coaching staff in the summer to pursue managerial opportunities but has yet to find a job, have shortened – especially as he has already done the caretaker role for the Toffees on two previous short-lived occasions after the exits of Marco Silva in 2019 and Benitez last year.

Another ex-Toffees favourite, Wayne Rooney – currently in charge at Major League Soccer side DC United – has also been touted as a successor, as has former Leeds manager Marcelo Bielsa.

Former Southampton manager Ralph Hasenhuttl, who was in consideration before Lampard was given the job last year but was still employed by Saints, is another option, as is Nuno Espirito Santo.

Everton’s director of football Kevin Thelwell has previously worked under Nuno at Wolves but the Portuguese is currently in charge at Saudi Arabian side Al-Ittihad and has a reported £8million buy-out clause.