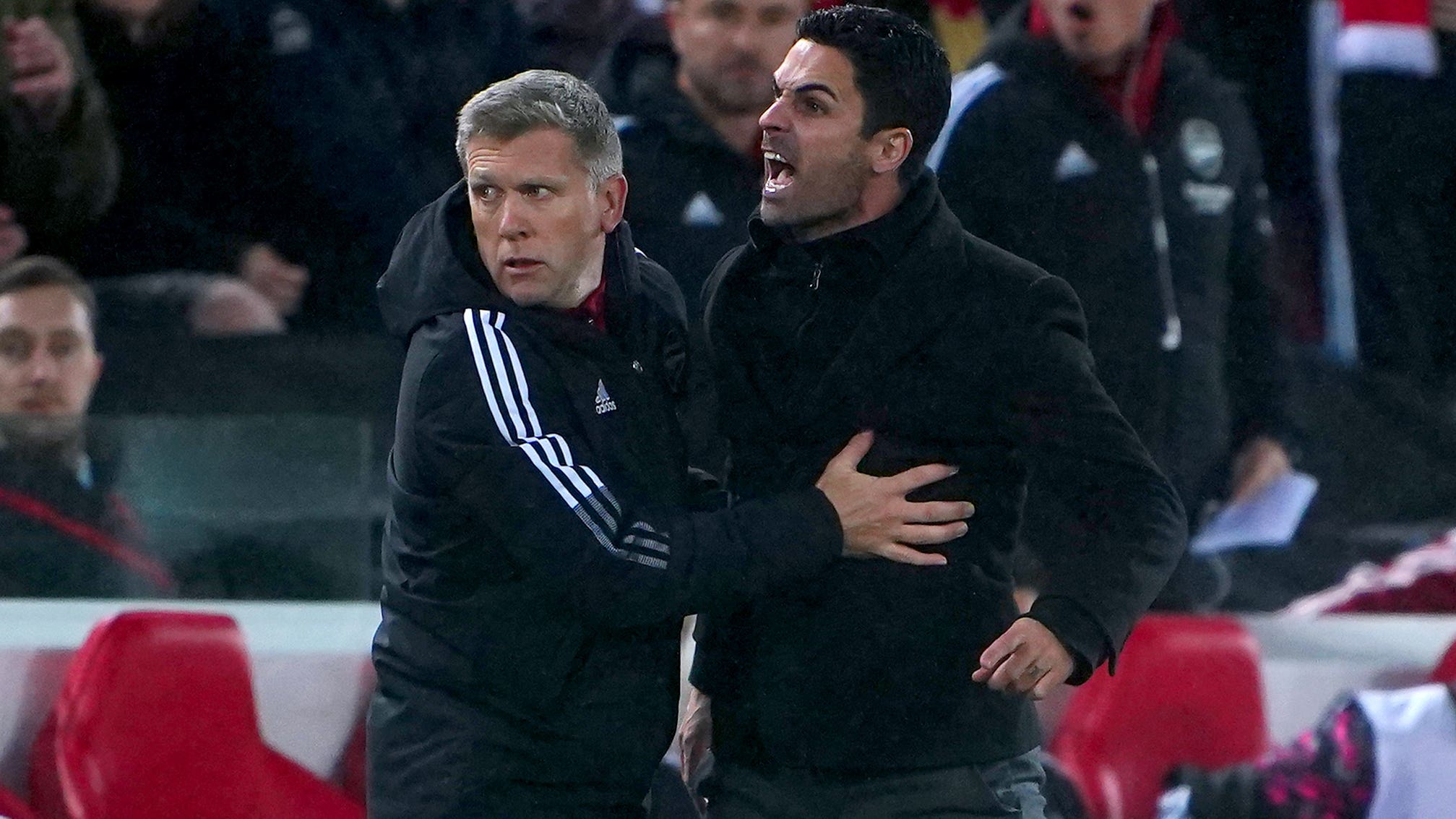 Arsenal boss Mikel Arteta admits his touchline behaviour can sometimes make for difficult viewing – and accepts all managers have a huge responsibility to try to keep their emotions under control.

Liverpool manager Jurgen Klopp has been charged with improper behaviour by the Football Association following his sending off during the 1-0 win over Manchester City on Sunday.

Klopp was shown a red card for his angry reaction towards referee Anthony Taylor and one of his assistants after Liverpool forward Mohamed Salah was not awarded a foul following a challenge by Bernardo Silva.

The German was not the first manager to lose their cool on the touchline in the heat of the moment – and nor will he be the last.

Arteta was involved in a heated row with Klopp during the Gunners’ 4-0 league defeat at Anfield in November 2021, having to be pulled back by his coaching staff.

The Spaniard understands why emotions run high in the dugout, but also why they must try to be kept in check.

“We do have a responsibility, not only to the referees, but to the game and the way we want it to be played and respected,” Arteta said.

“I have enough with my behaviour. I am trying to do the right thing for our club. It is very intense. It gets heated.

“There are moments you have seen in the last few games where VAR has to step in and there is a lot of controversy and a lot of moments when the result is in the air because it spins on a decision.

“It is not easy to manage, but we have a huge responsibility. If I have to watch myself on a camera after a match, there are probably things I would do differently.

“But once you are there, the way you talk, even to your own players, you might do it differently.

“It is something we have to learn. We are all conscious of it. Sometimes the heat of the game makes you behave in certain ways.”

Leeds head coach Jesse Marsch has been an animated figure on the touchline since taking over from Marcelo Bielsa in February.

The American was handed a one-match touchline ban and fined £10,000 by the Football Association for furious protests during the 5-2 defeat at Brentford during September.

Marsch had also been involved in a verbal spat with then Wolves boss Bruno Lage on the opening day of the new season.

“I don’t think any of us are proud when sometimes we have to be a bit more emotional than we would like to be,” he said.

“Certainly we all respect referees and we want to see them treated fairly. I think I try to do that, try to have dialogue, try to support the referees when I think they’ve done a good job.

“Even when I’m critical of them, I try not to make it accusatory and I respect the work that they do and how important they are to the game. Of course the decisions often dictate what is a fine line for a club like us, what success and failure is.

“We have to live with that and accept that and focus on ourselves. I think that’s the most important thing a manager can do.”

Fulham boss Marco Silva also understands how easy it can be to get swept up in the heat of the moment.

“Of course the emotion of the game sometimes makes you to go where you don’t want to go – over the limit – of course, and Klopp said that. Sometimes the emotion is that, but he apologised to the referee as well,” the Portuguese said.

“It was a particular moment from Jurgen, (but) not Jurgen Klopp as a manager, they are two different things in my opinion.

“No one wants to pass over the limits, but of course people have to understand sometimes that the emotion of the game, even if something should not happen, (that) sometimes things goes the wrong way and even if you want to control it, it is difficult.”