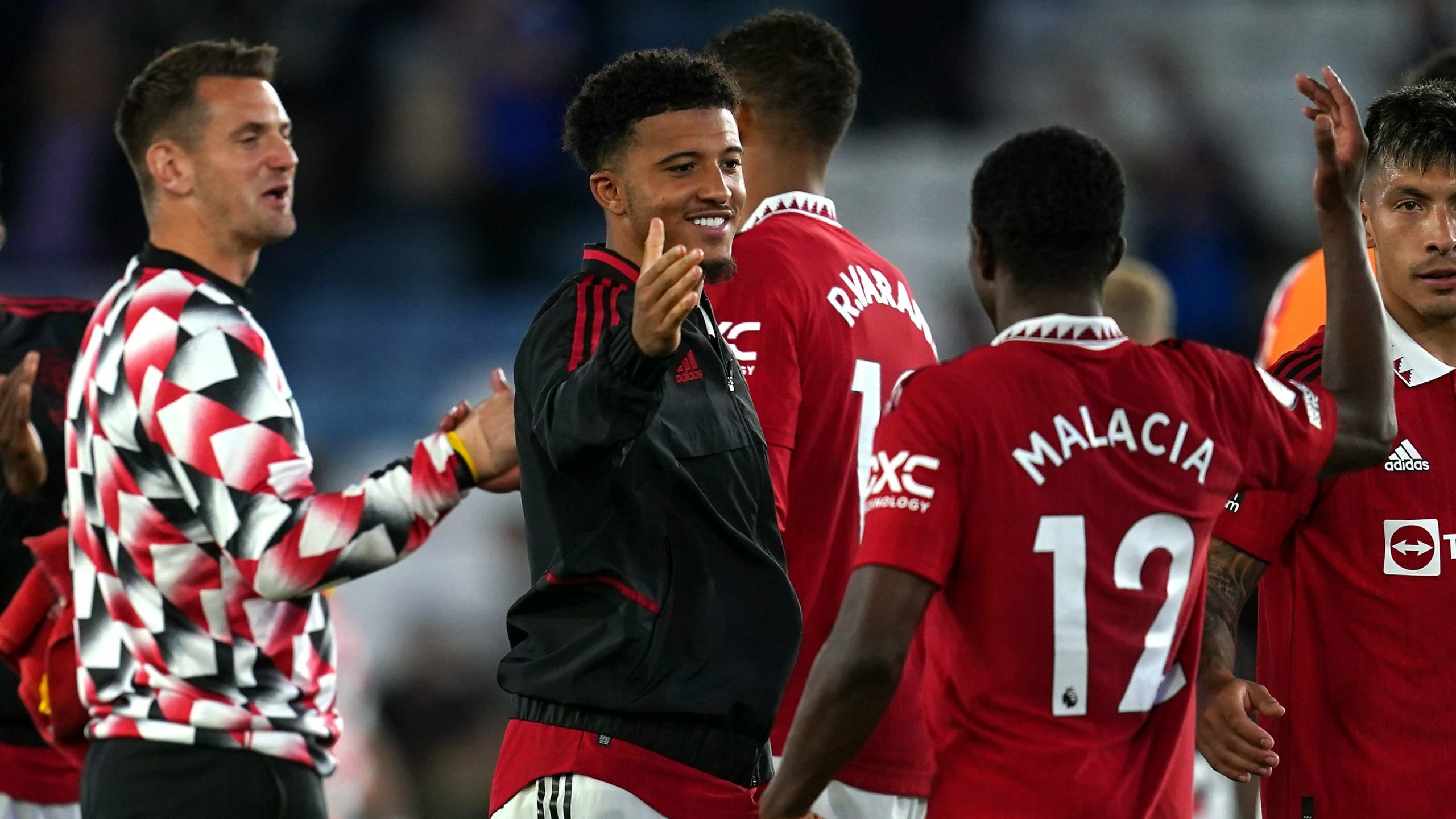 Erik ten Hag backed Jadon Sancho to become a prolific goalscorer after sealing Manchester United’s victory against a Leicester side that Brendan Rodgers admits face an uphill battle after a quiet transfer window.

The Red Devils continue to make progress following their wretched start to the season and left the King Power Stadium having secured a third straight Premier League win.

Sancho scored a fine effort in the victory against Liverpool and added a cool first-half goal in Thursday’s 1-0 win against Leicester, with Ten Hag hopeful more are to come after the forward’s difficult first season at United.

“I think he had quite a good pre-season,” the Dutchman said.

“I’m sure this is just the start for him. With his potential, there’s much more room for improvement.

Asked if he believes Sancho can become a prolific goalscorer, Ten Hag said: “Yes, I think he can.

“He has the capabilities and he did it also in a different league, but this is the Premier League.

“The intensity is higher so he has to adapt to that, mentally, the physical (side). The capabilities are there, the skills.”

Ten Hag named an unchanged side for a third straight match, meaning Cristiano Ronaldo started from the bench on a night when the transfer deadline passed without a much-discussed exit coming to pass.

“Maybe that is too quick to say that (we have turned a corner),” Ten Hag said after United’s latest win. “We are happy with it, that is sure.

“You can see there is raising a team, a squad raising, they are sticking together.

While United end the window having strengthened in a number of areas, Rodgers is left picking up the pieces following a frustrating summer.

Leicester chairman Aiyawatt Srivaddhanaprabha explained their restricted transfer approach in his programme notes ahead of a game that ended with boos at the final whistle.

“I’m happy that the window’s shut, if I’m being honest,” Foxes boss Rodgers said. “I mean, there were huge distractions for this window.

“You’ll have read the programme notes and seen the situation that the club is in, so to have to watch virtually every single club in the top five leagues get players in and for us not to be able to improve, that was difficult, not just as a manager but for the players, because players want to compete.

“This group have shown that they can compete, but we needed (help) but unfortunately we haven’t been able to get that.

“So, in terms of the results, it’s my responsibility. I take that.

“We should have won by now. We’ve been in a couple of games and in really good positions, but we weren’t able to see it through, so I totally understand it.

“Supporters want to see the team win and if they’re not they’ll tell you.

“So, for us, we won’t hide behind the rock and go away. We’re ready to fight now but it’s going to be really, really important that the supporters really get behind the players.

“As I said, it’s a really, really challenging situation with not being able to freshen up this team and this group of players.

“We really need their encouragement and help to push the players through.

“We’ll get a win sooner rather than later but we really need them behind us and that’s important.”