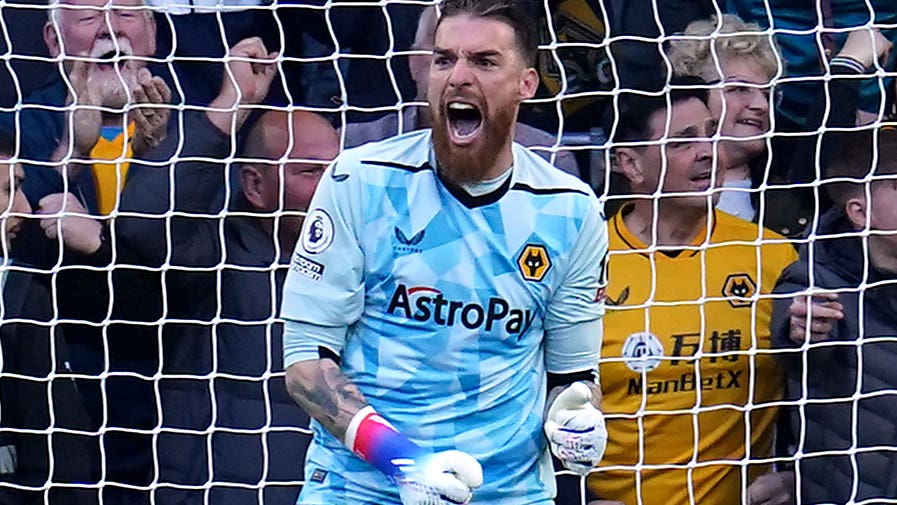 Jose Sa insists Wolves must be “warriors” to survive after it was revealed he had played most of the campaign with a broken wrist.

The goalkeeper was the hosts’ hero on Saturday when he saved Brennan Johnson’s late penalty to secure a 1-0 win.

Victory, their first since Bruno Lage was sacked this month, lifted managerless Wolves out of the bottom three.

Ruben Neves’ penalty won it and Sa – who broke his right wrist in the second game of the season – believes they need to put themselves on the line for Premier League safety.

He said: “After I did it against Fulham we played Tottenham and it was difficult. But this is our life – we have to be like warriors to help the team.

“Yes it hurt and yes I needed painkillers. Sometimes it still hurts but I came out for a punch immediately after the penalty and used my right fist and it was OK.

“It was painful before but it was an important time for the team and that’s why I took the decision to continue.”

Under-18 coach Steve Davis remains in caretaker charge after Julen Lopetegui rejected a move to Molineux last week due to personal reasons.

Wolves go to Crystal Palace on Tuesday and Sa said the players are just waiting for news on a new manager.

He said: “We have to keep going and we have to keep working with Steve who is a good manager and after, what happens, we will see.

“We take it step by step. We won today and now on Tuesday we have another game.

“It’s important to get the win which takes us out of the bottom three. But this is still very early in the league season and we are all together.

“If we win next week we can soon go to ninth or 10th. It’s still very early, we have a lot of time left and we are a good team.”

Forest remain bottom and are winless in their last eight games after Harry Toffolo was ruled to have handled Adama Traore’s shot in the area for Neves’ winner from the spot.

Defender Steve Cook said: “As a defender now, you haven’t got much of a chance.

“If you go to block a ball, the natural thing is to have your arms out as well. It’s very harsh. I’ve seen a lot of handballs given and not given and I’m not sure anymore what is a penalty and what isn’t.

“Yes, it just looks harsh to me. The lawmakers want goals and defenders suffer for it.”