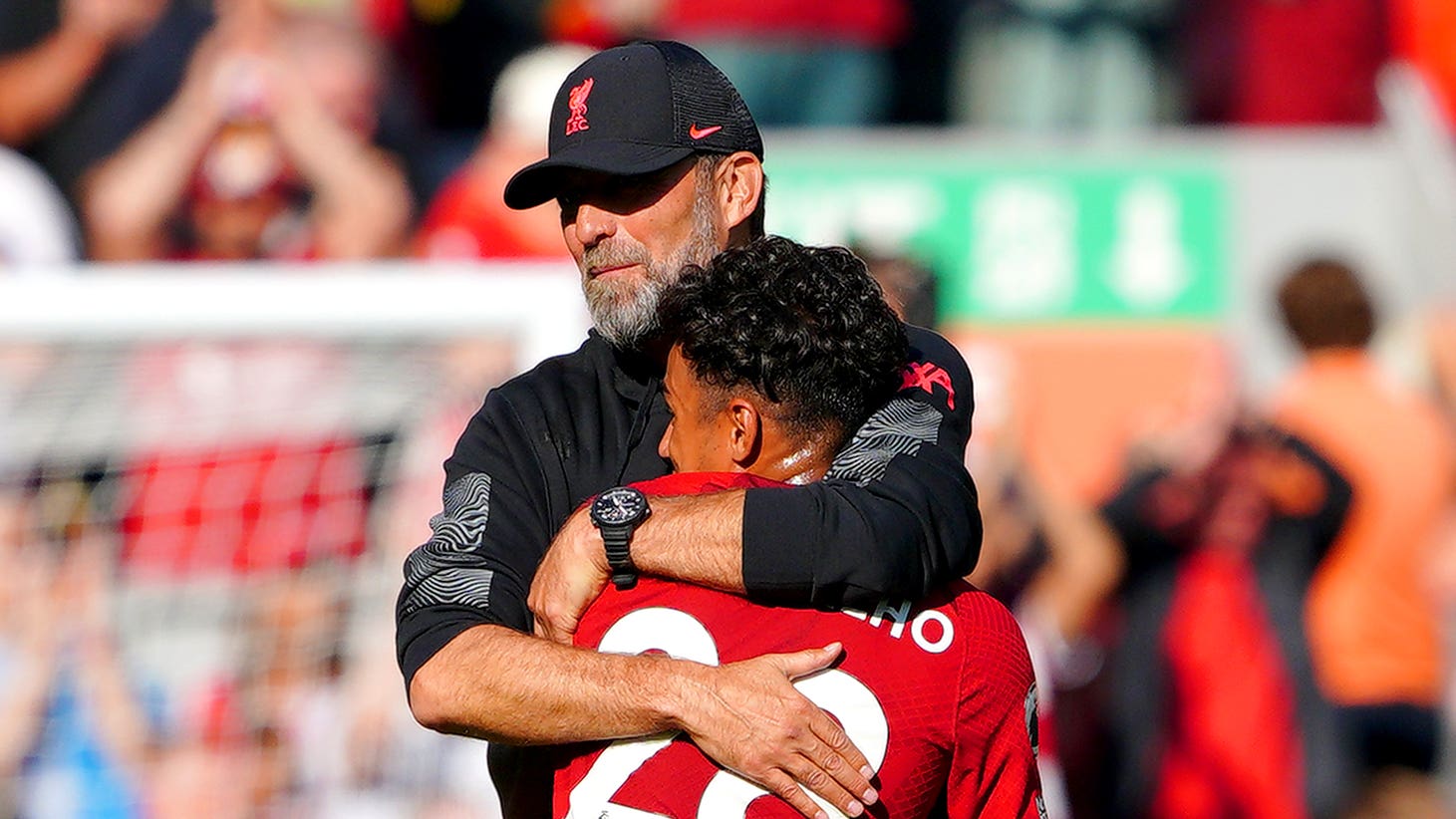 Jurgen Klopp called it the “perfect football afternoon” after Liverpool recorded their first win of the season with a record-equalling 9-0 Premier League victory against promoted Bournemouth.

Just pipped to the title last term, the Reds struggled in the opening weeks of this campaign as draws against Fulham and Crystal Palace were compounded by Monday’s galling loss at rivals Manchester United.

Klopp’s calls for a reaction were heeded in style on Saturday, when nobody inside a rocking Anfield could have predicted they would witness Liverpool matching their biggest top-flight win ever.

Chris Mepham’s own goal set the tone for the second half, with Firmino, Fabio Carvalho and Diaz scoring as Liverpool just failed to take it to double digits.

“After a short pre-season with mixed results, having an absolute highlight (by winning the Community Shield against Manchester City) that early in the season, playing really good stuff and then dropping for some reason.

“I know how it sounds when you lose a game and then you try to explain it. It’s always the same.

“Each manager in the world is a fantastic entertainer when you win football games. When you have to answer questions after you lose a game and try to find explanations, it sounds like excuses or whatever.

“That’s why the public part of my job is completely not important. It’s just important what’s the conclusion for us. That’s why I said we had to prove a point for us.

“We were not happy with the way we played. We had good moments in nearly all the games where we showed things which we are strong at, and other things where we have to improve.

“That’s what we had to do today, but you cannot make a list and take them all off the list step by step. You just have to give the game a proper direction and that’s why I loved the start today so much.

“You get this early goal and you get the second. And we kept going, scored different goals but always with the same purpose: keep going, put them under pressure, don’t stop.

“Then it’s 5-0 for half-time and I couldn’t respect more what Scott (Parker) is doing at Bournemouth in not the easiest circumstances, how I can see (it) from outside.

“At half-time it was important that we, again, keep going because it’s early in the season. It’s not for us now to control it a little bit and let him score one and have this kind of bitter taste after a wonderful afternoon.

“You get out of the blocks again with 6-0 and then everybody’s scored, we could bring on the kids, which deserve it so much, so we could rotate if we want at the start of the most busy period I’ve ever experienced.

“I can say it already before we’ve played it will be crazy and in the end it was the perfect football afternoon for us.

“A lot of different goalscorers, all these kinds of things. Wonderful goals, fantastic situations and we all know that we needed something like that.

“We had bigger chances in other games and didn’t use them. That’s the nature of the thing.”

Bournemouth manager Parker had warned of a potential backlash from Liverpool in the build-up and was left rocked by a result that underlined the need for new faces ahead of Thursday’s deadline.

“It goes without saying it’s a real humbling experience and one which was pretty shell-shocking, really, in the sense of the result.

“And probably not surprised so much, to be honest with you, in the sense of the levels we’re playing against here and the quality is just far greater than what we have in this present moment in time at our disposal.

“While of course it’s not me making any excuse because there’s some goals in that game that were of our own doing in terms of the set-play goals were really poor and we can do something about that.