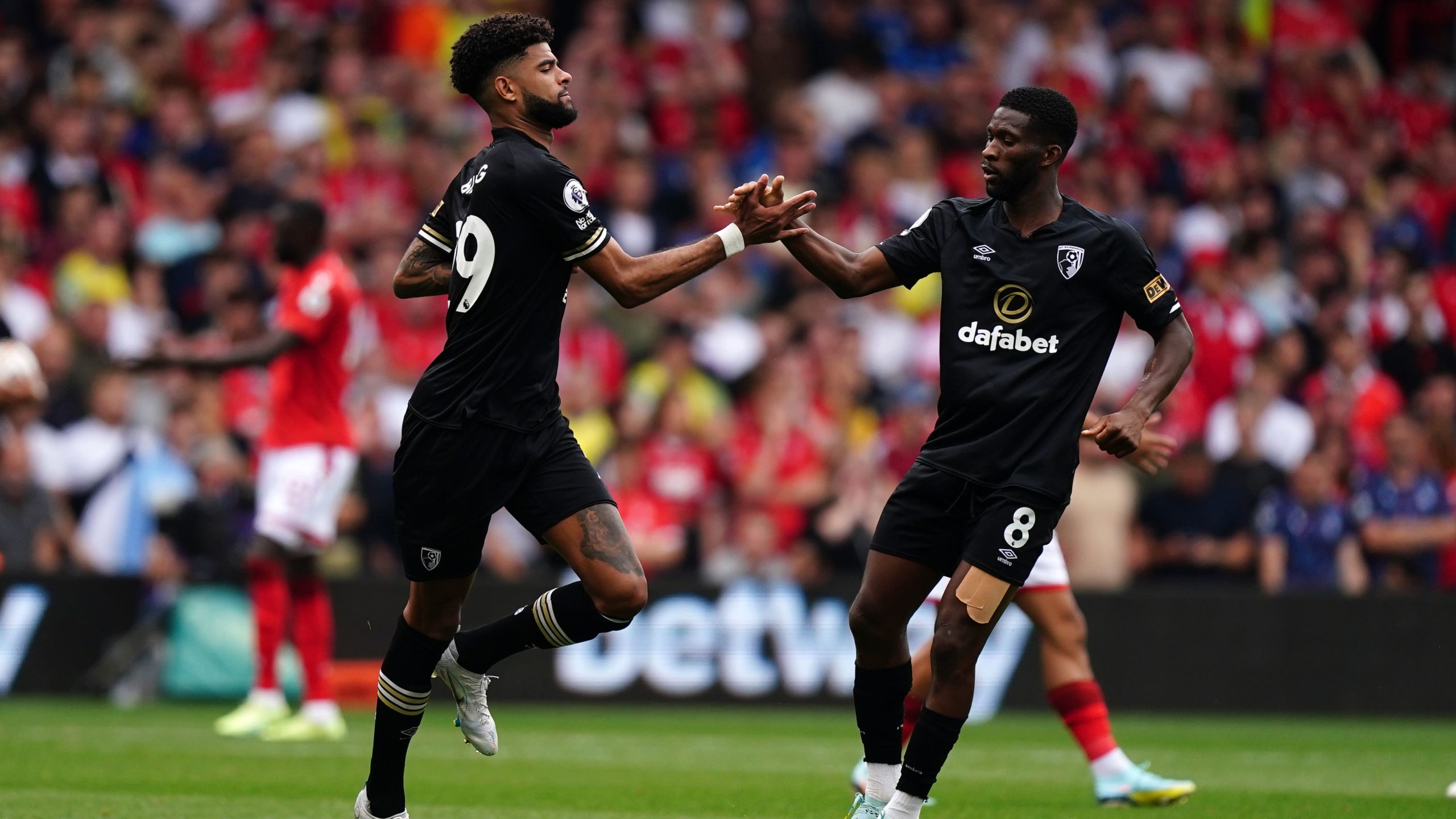 Managerless Bournemouth bounce back in style to stun Nottingham Forest

Bournemouth completed a roller-coaster week in style as they came from two goals at half-time down to win 3-2 at Nottingham Forest.

The Cherries, who lost 9-0 at Liverpool last weekend, looked on course for another defeat under the temporary charge of Gary O’Neil, who was inserted following Scott Parker’s sacking, as Forest led at the break through Cheikhou Kouyate’s header and Brennan Johnson’s penalty.

But O’Neil’s men responded and got back in it through Philip Billing’s wonder strike from distance and then drew level through Dominic Solanke’s acrobatic effort.

The memorable comeback was completed three minutes from time as they capitalised on poor defending by Scott McKenna as Jaidon Anthony converted the winner.

The result, on the back of a midweek draw with Wolves, might tempt the south coast club into giving O’Neil a longer opportunity to prove himself following Parker’s dismissal earlier in the week.

In contrast, it was a worrying afternoon for Forest, who would have been targeting three points after defeats to Tottenham and Manchester City in the last week.

But they did not turn up for the second half and were made to suffer a fourth defeat from six games back in the Premier League.

The previous matches for both teams had suggested that goals might be a problem and their combined lack of creativity made for a dull opening half-hour.

Forest looked the brighter of the two and there was some nice link-up play between Jesse Lingard, Morgan Gibbs-White and Johnson, but there was nothing in the way of clear chances.

In the end it needed a set-piece from the deadlock to be broken as Forest went ahead with the first effort on target of the match.

Gibbs-White swung in an inviting corner that Kouyate climbed highest from to power home a header from six yards.

The hosts doubled their lead just before the break from the penalty spot after a lengthy VAR review.

Michael Oliver ruled that Neco Williams’ shot had been blocked by the hand of Bournemouth defender Lloyd Kelly.

Finally after a delay of over just five minutes, Oliver confirmed the decision after checking the pitchside monitor, with Johnson converting his first Premier League goal with an emphatic finish from the spot.

Bournemouth needed a big second half to salvage anything from the game and they made the perfect start in the 50th minute.

Lingard was dispossessed and Lewis Cook teed up Billing, who thundered an unstoppable 30-yard effort into the top corner and scored their first goal since the opening day of the season.

The Cherries were vastly improved and levelled in the 63rd minute when Solanke’s acrobatic effort clipped off McKenna and past Dean Henderson.

A memorable comeback was sealed three minutes from time after some suicidal defending from McKenna, who did not get enough on his back pass to Henderson, with Solanke stealing in and squaring to Anthony to fire home moments after coming on.

Forest had a chance to level at the death but Taiwo Awoniyi screwed an effort wide with the goal gaping as Bournemouth were left to celebrate a fine afternoon.