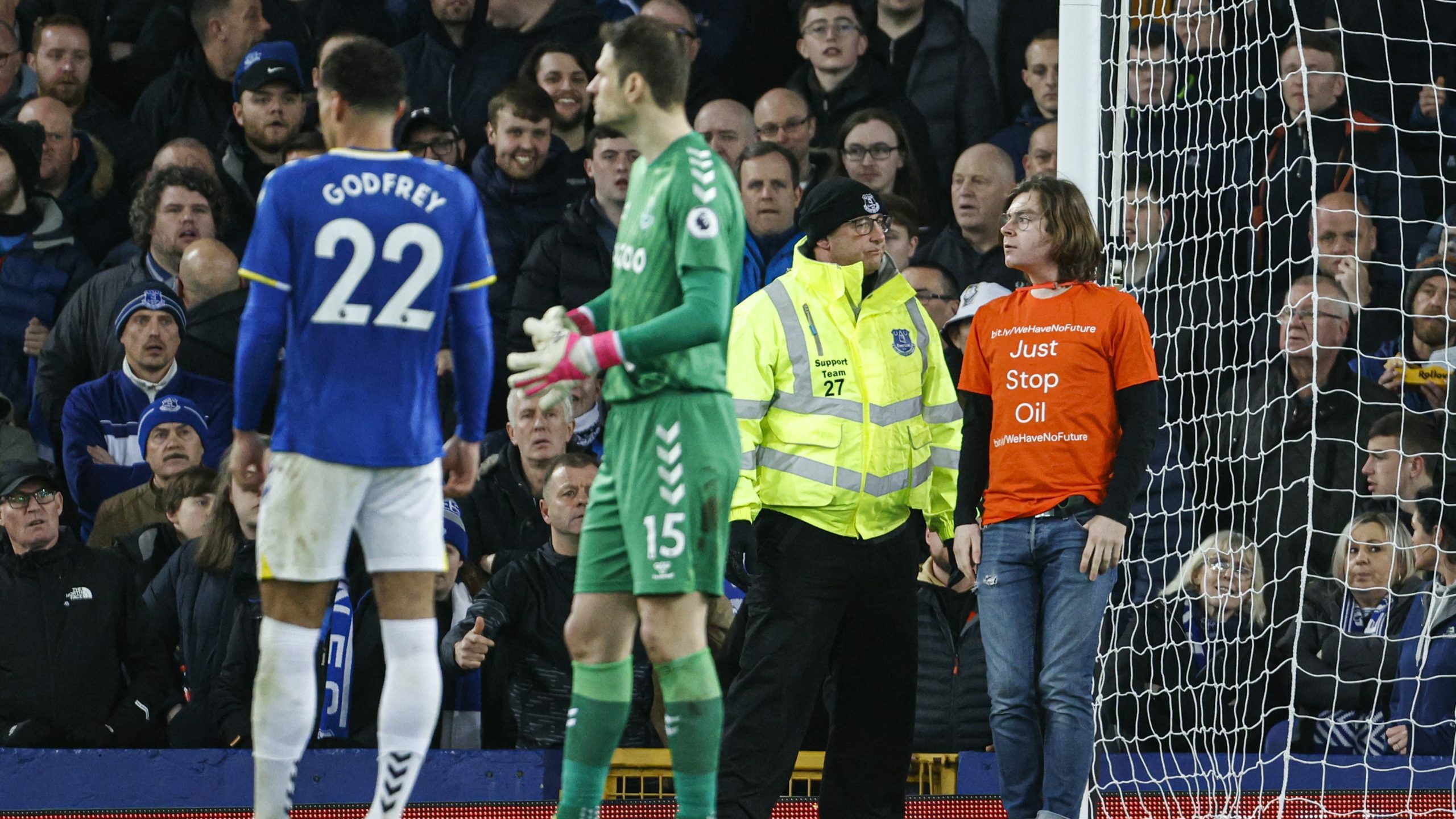 A climate change activist who tied himself to the goalpost during last season’s Premier League match between Everton and Newcastle has been given a six-week prison sentence.

Louis McKechnie, 21, denied aggravated trespass and going onto the playing area at the game at Goodison Park on March 17, but was found guilty at a trial at South Sefton Magistrates’ Court on Friday.

He told the court he was hoping to save lives through his actions, which saw him use a metal-enforced zip tie to attach himself to the goalpost by his neck.

She said his actions were “reckless” and “potentially very dangerous”.

He was given a six-week prison sentence for aggravated trespass, but the court heard he had already served that sentence, having been in custody since July.

Simon Jones, prosecuting, said McKechnie entered the pitch at the Gwladys Street end of the ground at the beginning of the second half in the match against Newcastle.

McKechnie, wearing an orange Just Stop Oil T-shirt, was on the pitch for about 10 minutes while stewards attempted to remove him, Mr Jones said.

Footage filmed for a YouTube video showed McKechnie walking down the steps in the stand and climbing over a gate to get onto the pitch, as one fan shouted at him: “F*** off you blert.”

The court heard the match was extended by 14 minutes following the disruption and Everton scored the only goal of the game in the ninth minute of stoppage time.

Pc Colin White, who arrested McKechnie after he was carried off the pitch, told the court one supporter attempted to assault the activist.

He added: “At that time in the football season Everton were struggling so there was great frustration in the crowd already.

McKechnie told the court Just Stop Oil was a civil resistance group which wanted the Government to act to end the use of fossil fuels.

He said: “We came up with the idea of how do we get the most eyes on that name, Just Stop Oil, and of course, in this day and age, football is the biggest cultural phenomenon there is.”

The match he targeted was picked because Everton were playing Newcastle – a football team sponsored by oil company Saudi Aramco, he told the court.

McKechnie added: “Hopefully, public awareness will bring public action which might actually, if we can get the Government to listen to us, might actually save a lot of lives.

“If it’s a chance of saving a billion lives, it’s worth it no matter the odds.”

Laura O’Brien, defending, said McKechnie was responding to the climate emergency and what he believed were failing democratic processes.

She said: “While the world watches this billion-pound enterprise that is Premier League football, which people are captivated by, he is taking the message to them that we need to Just Stop Oil.”

The court heard McKechnie, who gave his address as HMP Altcourse, had previous convictions for aggravated trespass and wilfully obstructing the highway.

The protester was also given a £50 fine, or one day in detention, for going onto the playing area, made subject to a three-year football banning order and ordered to pay £500 towards prosecution costs.