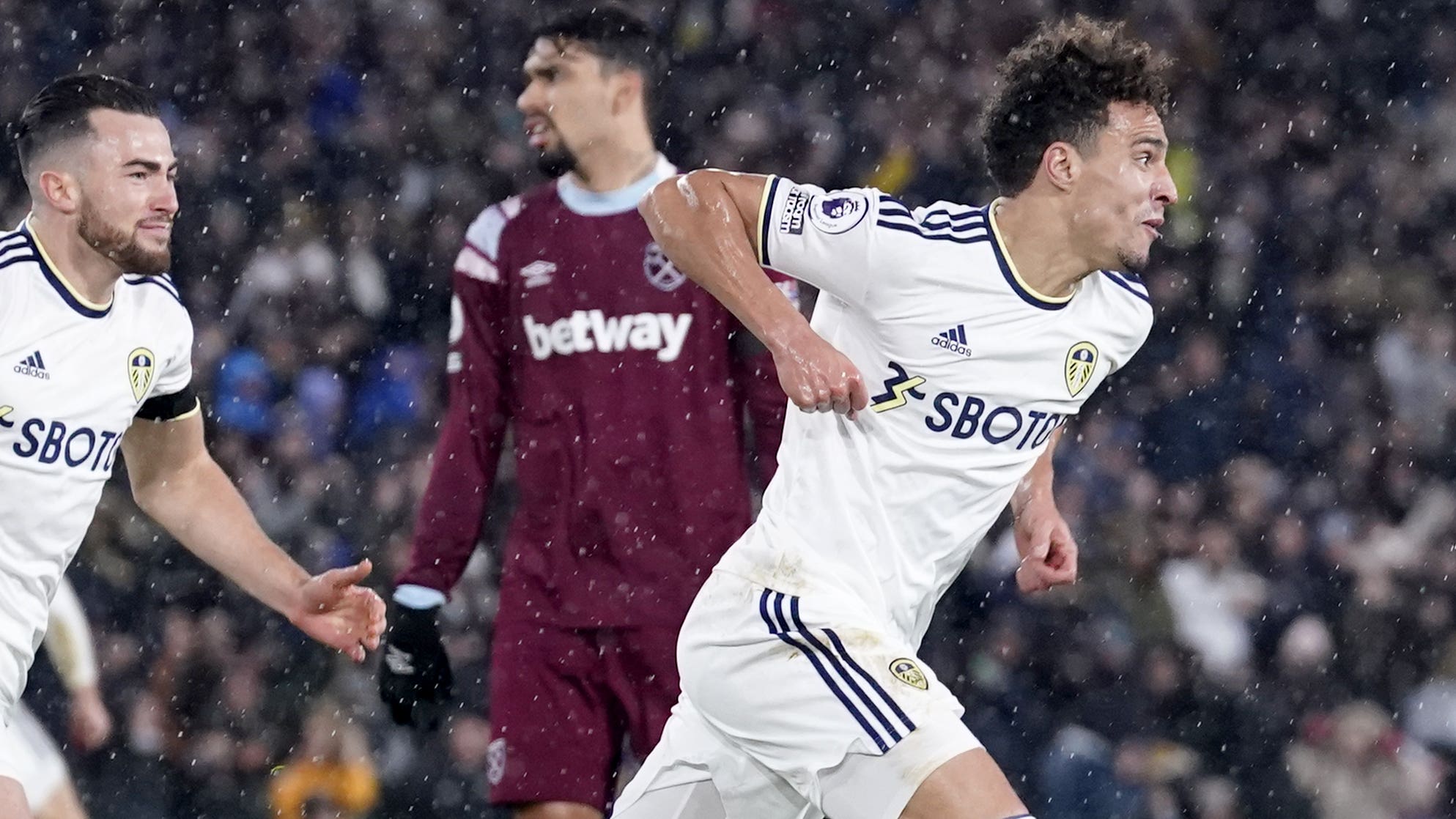 By Press AssociationJanuary 4, 2023No Comments

The Spanish forward rifled home his 10th league goal of the season midway through the second half to deny West Ham a much-needed victory.

The Hammers were on course for their first league win since October after quickfire goals either side of the break – via Lucas Paqueta’s penalty and a Gianluca Scamacca strike – had cancelled out Wilfried Gnonto’s opener.

Both sides wore black armbands as a mark of respect for West Ham’s joint-chairman David Gold, who died on Wednesday morning aged 86, while there was also a minute’s applause before kick-off.

The Hammers were bidding to halt a rotten run of form after five straight league defeats but they were soon back-pedalling.

Rodrigo scampered clear in the second minute and was denied a clear shot on goal by Morocco’s World Cup defender Nayef Aguerd, who made his full league debut for the Londoners.

Leeds were also a team in need of a lift after taking one point from their previous three matches and inspiration was provided by Gnonto in the 28th minute.

The teenager combined with Crysencio Summerville on the edge of the area to put Leeds ahead, slamming a low shot inside Lukasz Fabianski’s near post.

It was the Italy midfielder’s first Leeds goal and his first in English football.

West Ham almost responded through Pablo Fornals, who rolled a golden chance agonisingly wide before the visitors were awarded a penalty for Pascal Struijk’s challenge on Jarrod Bowen after a VAR intervention.

Referee David Coote was asked to view the pitchside monitor after initially waving play on and after a lengthy delay Paqueta held his nerve to lash his spot kick – and his first West Ham goal – into Meslier’s top left-hand corner.

The visitors struck within moments of the second half to make it 2-1.

Leeds midfielder Brenden Aaronson’s careless mis-placed pass found Scamacca and the Italian curled a superb low shot in off a post from 25 yards.

The home side huffed and puffed in a bid to get back on level terms, but provided another moment of quality to do so in the 70th minute.

Substitute Jack Harrison teed up Rodrigo on the edge of the box and the Spaniard took one touch before rifling home a fine finish.

Rodrigo was denied a second soon after when his drive was brilliantly tipped over by Fabianski following another defence-splitting pass from Harrison.

Both sides went close to snatching all three points as Leeds skipper Liam Cooper’s header was cleared off the line by Michail Antonio, who soon after was just inches away from connecting with fellow substitute Said Benrahma’s cross.

Fabianski then pulled off another world-class save in the dying moments to keep out Rodrigo’s header as the game ended in a draw.