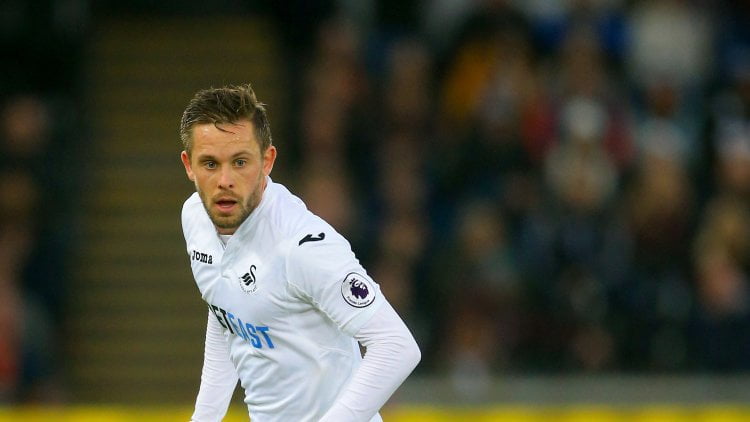 Gylfi Sigurdsson insists he is happy at Swansea and will only leave the Liberty Stadium if the club want to sell him.

Sigurdsson is expected to be a man in big demand this summer with Everton, West Ham and Premier League new boys Newcastle having already been linked with the 27-year-old.

The Icelandic playmaker has managed nine assists and 13 goals in a struggling Swansea team – a combined total only matched in the top flight by Tottenham’s Christian Eriksen – after signing a new deal last August.

“I signed a new contract in the summer and I’ve got three years left,” Sigurdsson said after becoming the first man to be named Swansea’s player of the year in successive seasons.

“So it’s down to the club if they want to sell me.

“But I was very happy when I was on loan here and then again in the last three years.

“I’m not trying to leave, I’m not desperate to go or anything.

“It (speculation) doesn’t bother me what people are talking about.

“It’s been easy in the last couple of months because we’ve been in a very serious position in the league, so it’s been easy to concentrate on that.

“I think it’ll continue to be like that because whatever happens, happens.”

Swansea were bottom of the league with 12 points from 19 games when Paul Clement was appointed head coach at the start of January.

Survival looked a tall order for a club who had sacked Francesco Guidolin and Bob Bradley in the space of three months.

But Clement oversaw a recovery which took 26 points from 18 games and secured Swansea’s safety on the penultimate Premier League weekend.

“The coaching staff who came in are top notch and Paul knows what he’s doing,” Sigurdsson said.

“You could see that from the first day.

“He’s been outstanding and he managed to change the mood, the atmosphere and the confidence of the team.

“I think for as long as he’s here the club is in really good hands.”

The pressure will be off when Swansea close their season at home to West Brom on Sunday.

But Sigurdsson admitted he had enjoyed the battle against relegation in a strange sort of way.

“I’ve played a lot of football and the goals and the assists have been coming for me in the last three years,” he said.

“T hings haven’t gone as well as I would have liked for the team in the last year-and-a-half.

“But I have still enjoyed the pressure of being in this (relegation) situation.

“There was a lot of pressure in games where we couldn’t make any mistakes.

“It shows the character of the team how well we’ve done in the last few months.

“It’s a good feeling when you deliver under a lot of pressure.”