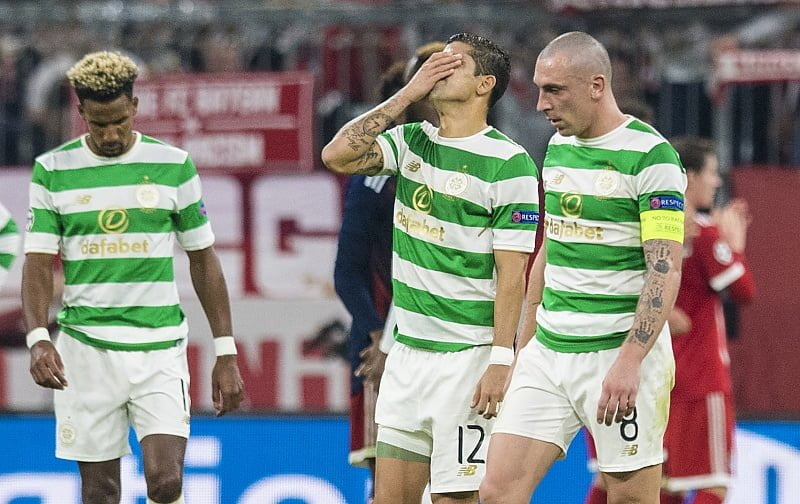 Bayern Munich outclassed Celtic and handed out another footballing lesson in the Champions League for Brendan Rodgers’ side on Wednesday night.

This could easily have been six or seven without reply in the Allianz Arena and nobody would have been surprised.

This was supposed to be Bayern in a transition from the unhappy days under Carlo Ancelotti to the return of the prodigal son Jupp Heynckes. The Germans all seemed happy at the end of a trouble-free ninety minutes.

Celtic never laid a glove on Bayern until it was way too late. I was disappointed in the Scottish champions inability to keep the ball longer than three passes before surrendering possession.

Brendan Rodgers has suffered some injury blows since the start of the season in the back line and yet again it proved to be his undoing. The Celtic manager has no-one to blame but the board for dragging their heels on buying a centre-half in the summer.

There is no excuse.

Cristian Gamboa had a torrid night and should have paid for a match ticket to get back into the ground. All he did was watch Kingsley Coman go past him time after time. He blundered his way through the game and cost Celtic the opening goal trying to play an offside, well after the pass was played to Robert Lewandowski. Coman skinned him again to set up Bayern’s second for Kimmich.

I thought at this point it could have been another five, six or seven-nil hiding.

Craig Gordon had his now obligatory mistake, which led to Bayern’s third. He delivered a hospital pass to his captain Scott Brown and from there it led to a corner and another goal.

Thankfully, the German’s had already decided to save some fuel and eased up to save Celtic’s blushes, three was enough on the night.

It has to be remembered that Celtic’s goal from the outset of this campaign was to secure third place and Europa League football in the New year, barring a catastrophe, that will be achieved, thanks to the away win against Anderlecht.

Financially, the smaller clubs can still surprise the giants of Europe with the odd result, but they are getting harder and harder to achieve.

However, that does not excuse an inept first 45 minutes from Celtic. They should have performed better despite the imbalance in wealth and calibre of player at Bayern’s disposal.

Brendan Rodgers mentioned after the game that he believed there are positives to be taken from the match to take into the forthcoming home match against Bayern. Yes, defend better and keep possession for starters!

Celtic must now lift themselves for the League cup semi-final on Saturday. They are a level above Hibernian and should offer Neil Lennon’s side the same feeling they just sampled in Germany.

Football is becoming more predictable these days. The team with the most money usually wins the game.

Johan Cruyff used to say, “Why couldn’t you beat a richer club? I’ve never seen a bag of money score a goal.”

Unfortunately, for Celtic and others in Europe, bags of money makes it easier for the bigger clubs to score more goals and contest the Dutch master’s old theory.